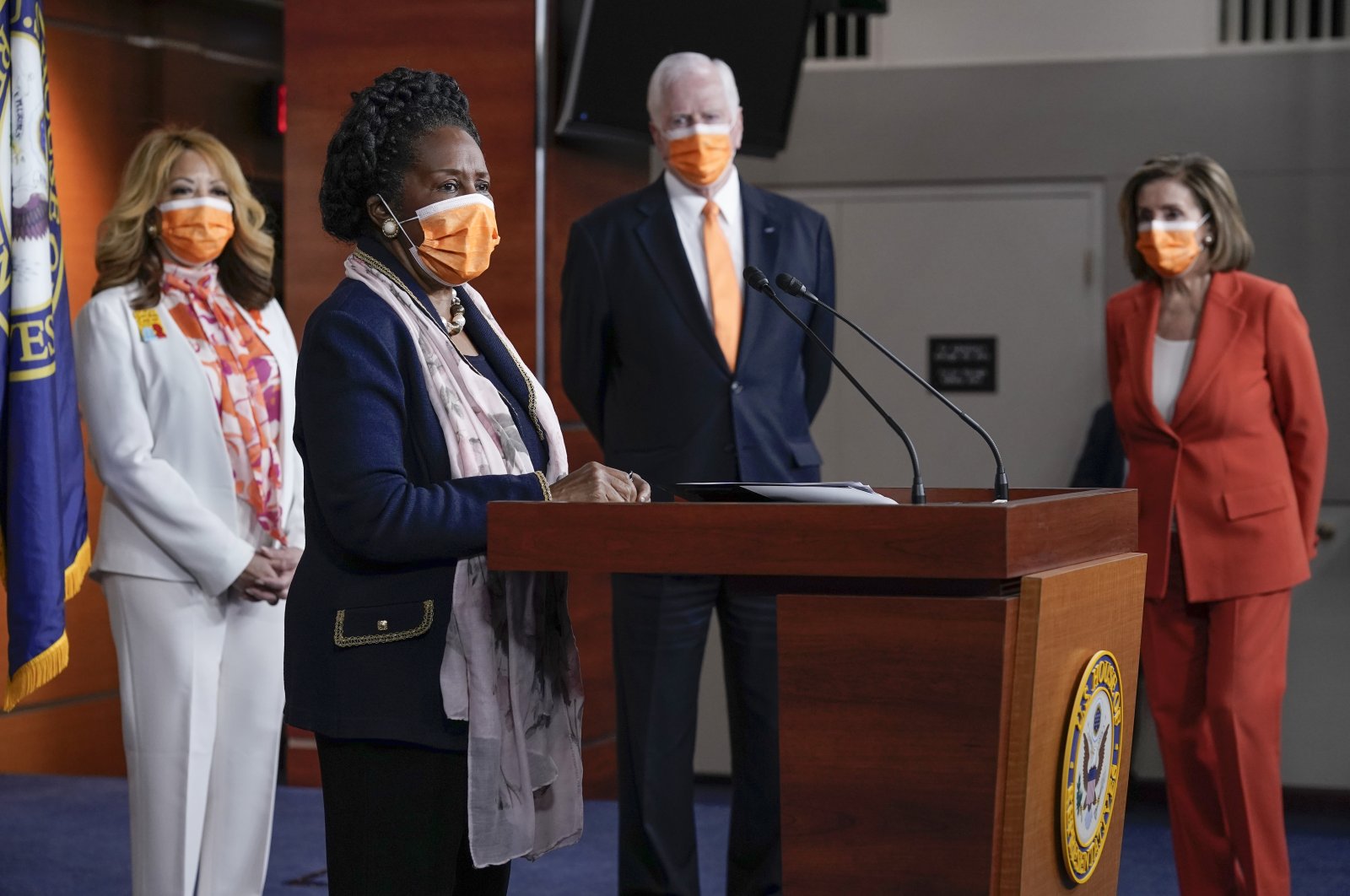 Rep. Sheila Jackson Lee speaks to reporters as she is joined by, from left, Rep. Lucy McBath, Rep. Mike Thompson and Speaker of the House Nancy Pelosi, at a news conference on passage of gun violence prevention legislation, at the Capitol in Washington, U.S., March 11, 2021. (AP Photo)
by Associated Press Mar 16, 2021 5:23 pm
RECOMMENDED

After President Joe Biden’s giant COVID-19 relief bill passed Congress, he made a prime-time address to the nation and presided over a Rose Garden ceremony. However, there wasn’t so much as a statement from the White House after the House passed legislation that would require background checks for gun purchases, a signature Democratic issue for decades.

Biden’s views on gun regulation have evolved along with his party, at one point reluctant to impose too many restrictions that blue-collar Democrats opposed, to a near-unanimous call to do something about gun violence after a spate of mass shootings.

In the early months of Biden's presidency, even popular proposals like background checks are lower on his list of priorities and their prospects in the Senate cloudy. The two bills that passed the House last week would expand background checks on gun purchases, the first significant movement on gun control since Democrats took control of both chambers of Congress and the White House.

They are among a number of major bills House Democrats have pushed through in recent weeks, including legislation to expand voting rights and support union organizing, that now face an uncertain fate in the Senate. Supporters of the background check bills are hoping to see Biden become more actively involved.

"I hope and I expect that President Biden will be willing to get engaged in hand to hand advocacy in the Senate on background checks,” said Sen. Chris Murphy, a Connecticut Democrat who has led the push for gun control in the Senate.

While Biden was more conservative on gun issues early in his Senate career, in the mid-1990s he helped pass the Brady Bill, which mandated federal background checks for gun purchases, and he wrote the 1994 crime bill that included a 10-year assault weapons ban.

During his presidential campaign, Biden embraced an expansive gun-control agenda, backing an assault weapons ban and buyback program that was once seen as highly controversial and won’t see action in a divided Congress.

On the third anniversary of the Parkland, Florida, school shooting last month, Biden issued a statement reiterating his support for such measures, prompting the National Rifle Association (NRA) to label him "increasingly hostile” toward gun rights.

"Today, I am calling on Congress to enact commonsense gun law reforms, including requiring background checks on all gun sales, banning assault weapons and high-capacity magazines, and eliminating immunity for gun manufacturers who knowingly put weapons of war on our streets,” Biden said in the statement.

However, the bills that just passed the House received meager GOP support there and face a much tougher road in the Senate, where 10 Republicans would have to join all 50 Democrats and independents for them to move toward passage.

Democratic Rep. Jim Clyburn of South Carolina, who sponsored one of the bills, suggested Democrats would have to eliminate the 60-vote threshold for passing legislation to move them along. "I think it’s about time for us to get rid of the filibuster,” Clyburn said in an interview.

Meanwhile, multiple Democrats have expressed opposition to reforming the filibuster, as has Biden himself. That leaves gun-control advocates hoping that the politics of gun control have shifted enough that more Republicans may be open to legislation that advocates argue is widely popular with the American public.

With Senate Majority Leader Chuck Schumer promising to give the background check bills a vote on the floor, Democrats are hopeful Republicans will step up when they’re put on the spot. They’re also heartened by the declining influence of the NRA, which filed for bankruptcy this year after being outspent by gun-control groups for the first time during the 2018 election.

"I think the implosion of the NRA, the growing support among the American people and the inevitability of increased support gives us an opportunity we haven’t had before,” Democratic Sen. Richard Blumenthal from Connecticut, said last week. "What’s changed is we now have a president who can put pressure on our colleagues,” he added.

While much of Biden’s gun-control agenda is unlikely to win passage in an evenly divided Senate, some of his proposals can be achieved by prioritizing resources within the federal government. Biden has proposed, for instance, directing the FBI to ensure state and local law enforcement agencies are notified if someone who tries to buy a gun fails a background check.

He has also said he’ll ask his attorney general to look for ways to better enforce gun laws, but the Biden administration has yet to signal how the president himself will get engaged.

White House press secretary Jen Psaki said Biden is looking forward to working with Congress "to advance priorities, including repealing gun manufacturers’ liability shields.” She added that he "will look for opportunities to be engaged” on the background check bills.

Democrats still face political headwinds. A Gallup poll last November found that while 57% of Americans want stricter gun laws, that marked the lowest number in favor since 2016, and gun sales hit a new record high in January, continuing a surge over the past year.

Republican Sen. Pat Toomey of Pennsylvania and Democratic Sen. Joe Manchin of West Virginia, a moderate, have worked together for years to find a compromise on background checks. In a statement, Toomey's office said the senator remains supportive of a previous bipartisan proposal with Manchin but believes "progress is only possible on this issue if the measure in question is narrow and protects the rights of law-abiding gun owners.”

Still, advocates say with a largely unified Democratic Party and the president on their side, they hope to finally see some movement.

John Feinblatt, president of Everytown for Gun Safety, pointed in particular to Democratic wins in the 2018 midterms while running openly for gun control as evidence the politics are changing.

"Democrats are in control of the White House and both chambers of Congress. The NRA is in the weakest shape it’s ever been,” he said. "It’s become clear that gun-safety laws aren’t only good life-saving policies, they’re good politics.”