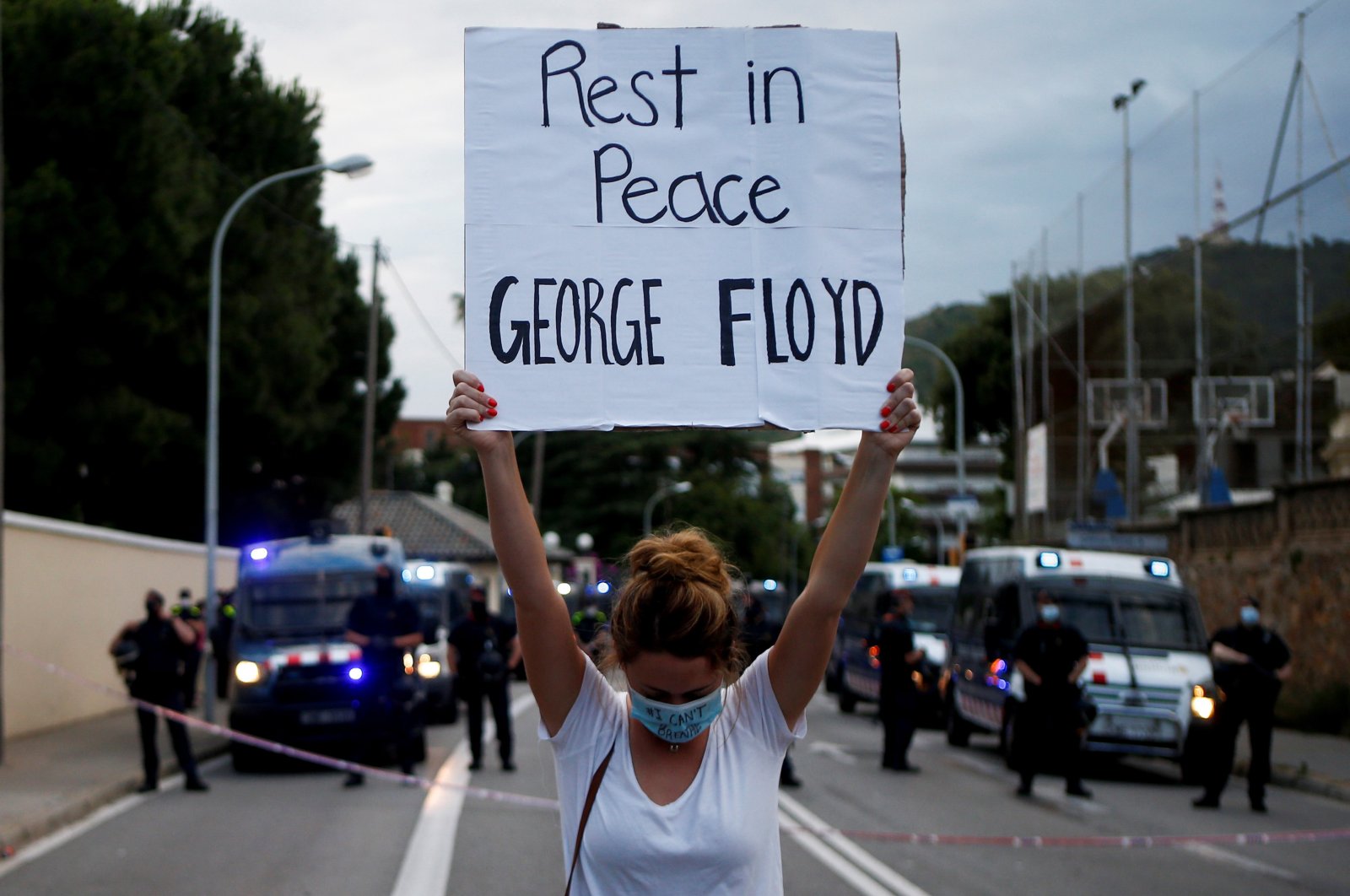 Dozens of people gather outside the U.S. Consulate in Barcelona, Catalonia, northeastern Spain, during a demonstration to protest the death of George Floyd, who died in Minneapolis police custody, June 1, 2020. (EPA Photo)
by ASSOCIATED PRESS
Jun 01, 2020 11:21 pm

An autopsy commissioned for George Floyd’s family found that he died of asphyxiation due to neck and back compression when a Minneapolis police officer held his knee on Floyd's neck until he stopped breathing, ignoring his cries of distress, the family’s attorneys said Monday.

The autopsy by a doctor who also examined Eric Garner’s body found the compression cut off blood to Floyd’s brain, and weight on his back made it hard to breathe, attorney Ben Crump said. He called for the third-degree murder charge against Officer Derek Chauvin to be upgraded to first-degree murder and for three other officers to be charged.

The family’s autopsy differs from the official autopsy as described in a criminal complaint against the officer. That autopsy included the effects of being restrained, along with underlying health issues and potential intoxicants in Floyd’s system, but also said it found nothing “to support a diagnosis of traumatic asphyxia or strangulation.”

Floyd, a black man who was in handcuffs at the time, died after Chauvin, who is white, ignored bystander shouts to get off him and Floyd's cries that he couldn't breathe. His death, captured on citizen video, sparked days of protests in Minneapolis that have spread to cities around the U.S.

The official autopsy last week provided no other details about intoxicants, and toxicology results can take weeks. In the 911 call that drew police, the caller described the man suspected of paying with counterfeit money as “awfully drunk and he’s not in control of himself.”

Crump said last week that he was commissioning the family's own autopsy. Floyd’s family, like the families of other black men killed by police, wanted an independent look because they didn’t trust local authorities to produce an unbiased autopsy.

The family's autopsy was conducted by Michael Baden and Allecia Wilson. Baden is the former chief medical examiner of New York City, who was hired to conduct an autopsy of Garner, a black man who died in 2014 after New York police placed him in a chokehold and he pleaded that he could not breathe.

Baden also conducted an independent autopsy of Michael Brown, an 18-year-old shot by police in Ferguson, Missouri. He said Brown's autopsy, requested by the teen's family, didn’t reveal signs of a struggle, casting doubt on a claim by police that a struggle between Brown and the officer led to the shooting.

Chauvin, who was also charged with manslaughter, is being held in a state prison. The other three officers on scene, like Chauvin, were fired the day after the incident but have not been charged.

The head of the Minneapolis police union said in a letter to members that the officers were fired without due process and labor attorneys are fighting for their jobs. Lt. Bob Kroll, the union president, also criticized city leadership, saying a lack of support is to blame for the days of sometimes violent protests.

When asked to respond, Mayor Jacob Frey said, “For a man who complains so frequently about a lack of community trust and support for the police department, Bob Kroll remains shockingly indifferent to his role in undermining that trust and support." Frey said Kroll's opposition to reform and lack of empathy for the community has undermined trust in the police.

Gov. Tim Walz announced Sunday that Attorney General Keith Ellison would take the lead in any prosecutions in Floyd's death. Local civil rights activists have said Hennepin County Attorney Mike Freeman doesn't have the trust of the black community. They have protested outside his house, and pressed him to charge the other three officers.

Freeman remains on the case.