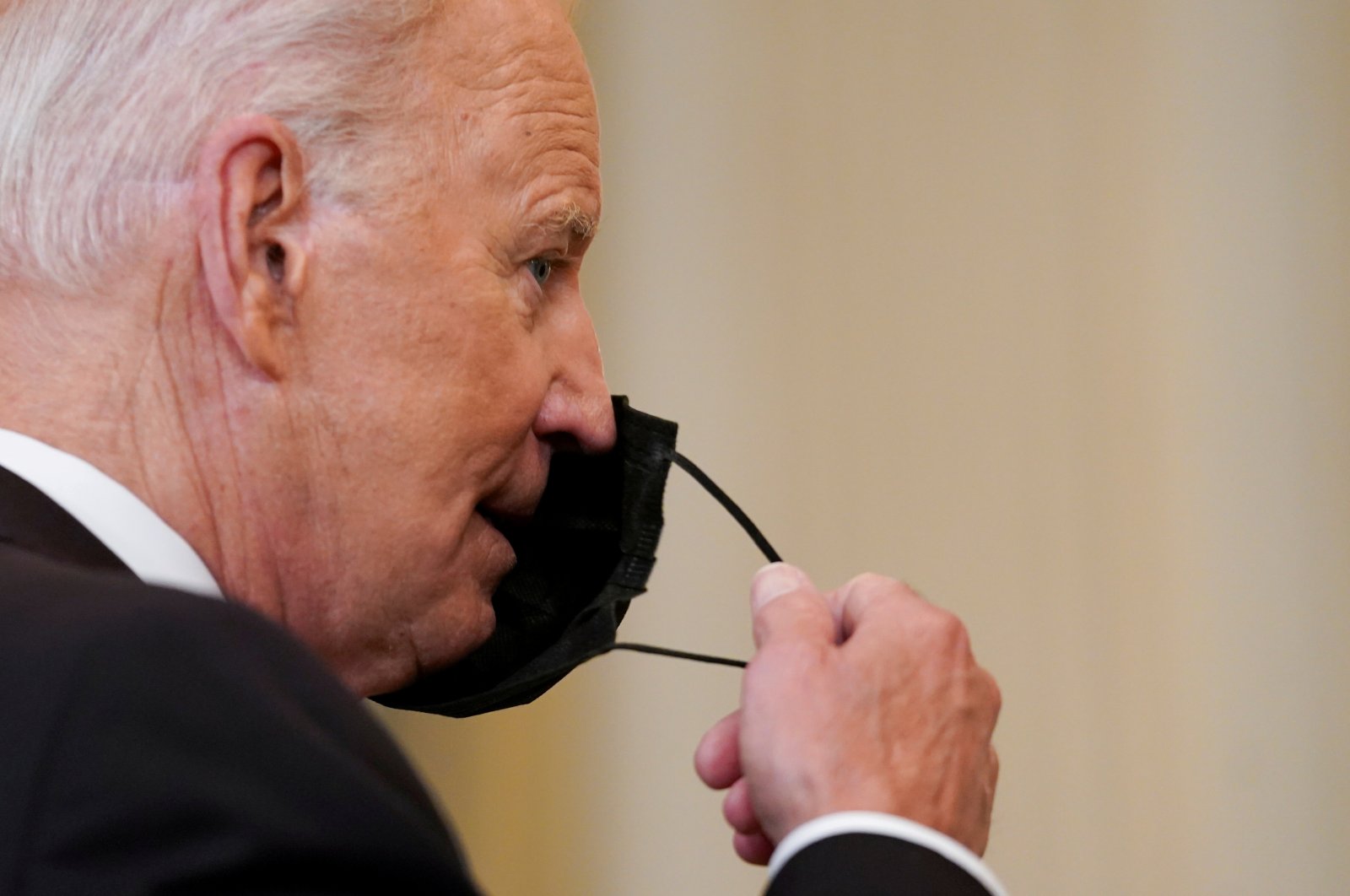 U.S. President Joe Biden takes off his face mask before delivering remarks on the delta variant and his administration's efforts to increase vaccinations, from the State Dining Room of the White House in Washington D.C., U.S., Sept. 9, 2021. (Reuters Photo)
by ASSOCIATED PRESS Sep 10, 2021 9:15 am
RECOMMENDED

In his most forceful pandemic actions and words, President Joe Biden ordered sweeping new federal vaccine requirements for as many as 100 million Americans – private-sector employees as well as health care workers and federal contractors – in an all-out effort to curb the surging COVID-19 delta variant.

Speaking at the White House Thursday, Biden sharply criticized the tens of millions of Americans who are not yet vaccinated, despite months of availability and incentives.

"We’ve been patient. But our patience is wearing thin, and your refusal has cost all of us," he said, all but biting off his words. The unvaccinated minority "can cause a lot of damage, and they are.”

Republican leaders – and some union chiefs, too – said Biden was going too far in trying to muscle private companies and workers, a certain sign of legal challenges to come. Gov. Henry McMaster of South Carolina said in a statement that "Biden and the radical Democrats (have) thumbed their noses at the Constitution," while the largest federal employee union American Federation of Government Employees National (AFGE) President Everett Kelley insisted that "changes like this should be negotiated with our bargaining units where appropriate.”

On the other hand, there were strong words of praise for Biden's efforts to get the nation vaccinated from the American Medical Association (AMA), the National Association of Manufacturers (NAM) and the Business Roundtable – though no direct mention of his mandate for private companies.

The expansive rules mandate that all employers with more than 100 workers require them to be vaccinated or test for the virus weekly, affecting about 80 million Americans. And the roughly 17 million workers at health facilities that receive federal Medicare or Medicaid also will have to be fully vaccinated.

Biden is also requiring vaccination for employees of the executive branch and contractors who do business with the federal government - with no option to test out. That covers several million more workers.

Biden announced the new requirements in a Thursday afternoon address from the White House as part of a new "action plan” to address the latest rise in coronavirus cases and the stagnating pace of COVID-19 shots. Just two months ago, Biden prematurely declared the nation’s "independence” from the virus.

Now, despite more than 208 million Americans having at least one dose of the vaccines, the United States is seeing about 300% more new COVID-19 infections a day, about two-and-a-half times more hospitalizations, and nearly twice the number of deaths compared to the same time last year. Some 80 million people remain unvaccinated.

"We are in the tough stretch and it could last for a while,” Biden said. After months of using promotions to drive the vaccination rate, Biden is taking a much firmer hand, as he blames people who have not yet received shots for the sharp rise in cases killing more than 1,000 people per day and imperiling a fragile economic rebound.

In addition to the vaccination requirements, Biden moved to double federal fines for airline passengers who refuse to wear masks on flights or to maintain face-covering requirements on federal property in accordance with Centers for Disease Control and Prevention (CDC) guidelines. He announced that the government will work to increase the supply of virus tests, and that the White House has secured concessions from retailers including Walmart, Amazon and Kroger to sell at-home testing kits at cost beginning this week.

The administration is also sending additional federal support to assist schools in safely operating, including additional funding for testing. And Biden called for large entertainment venues and arenas to require vaccinations or proof of a negative test for entry. The requirement for large companies to mandate vaccinations or weekly testing for employees will be enacted through a forthcoming rule from the Occupational Safety and Health Administration that carries penalties of $14,000 per violation, an administration official said.

The rule will require that large companies provide paid time off for vaccination.

Meanwhile, the Centers for Medicare & Medicaid Services will extend a vaccination requirement issued earlier this summer – for nursing home staff – to other health care settings including hospitals, home-health agencies and dialysis centers.

Separately, the Department of Health and Human Services (HHS) will require vaccinations in Head Start Programs, as well as schools run by the Department of Defense and Bureau of Indian Education, affecting about 300,000 employees. Biden's order for executive branch workers and contractors includes exceptions for workers seeking religious or medical exemptions from vaccination, according to press secretary Jen Psaki.

Federal workers who don't comply will be referred to their agencies' human resources departments for counseling and discipline, including potential termination.

An August poll from The Associated Press-NORC Center for Public Affairs Research (AP-NORC) found 55% of Americans in favor of requiring government workers to be fully vaccinated, compared with 21% being opposed. Similar majorities also backed vaccine mandates for health care workers, teachers working at K-12 schools and workers who interact with the public, as at restaurants and stores. Biden has encouraged COVID-19 vaccine requirements in settings like schools, workplaces and university campuses.

On Thursday, the Los Angeles Board of Education voted to require all students 12 and older to be fully vaccinated in the the nation’s second-largest school district. Walmart, the nation’s largest private employer, said in late July it was requiring all workers at its headquarters in Bentonville, Arkansas, as well as its managers who travel within the U.S., to be vaccinated against COVID-19 by Oct. 4.

But the company had stopped short of requiring shots for its front line workers. CVS Health said in late August it would require certain employees who interact with patients to be fully vaccinated by the end of October. That includes nurses, care managers and pharmacists. In the government, several federal agencies have previously announced vaccine requirements for much of their staff, particularly those in health care roles like the Department of Veterans Affairs (VA), and the Pentagon moved last month to require all service members to get vaccinated.

"There is an aspect to this now that has to do with our country being so divided,” said Sharfstein. "This has become so politicized that people can’t see the value of a vaccination that can save their lives. Our own divisions are preventing us from ending a pandemic,” he explained.

More than 177 million Americans are fully vaccinated against the coronavirus, but confirmed cases have shot up in recent weeks to an average of about 140,000 per day with on average about 1,000 deaths, according to data from the CDC.

Most of the spread – and the vast majority of severe illness and death – is occurring among those not yet fully vaccinated. So-called breakthrough infections in vaccinated people occur, but tend to be far less dangerous. Federal officials are moving ahead with plans to begin administering booster shots of the mRNA vaccines to bolster protection against the more transmissible delta variant.

Last month Biden announced plans to make them available beginning Sept. 20, but only the Pfizer-BioNTech COVID-19 vaccine will likely have received regulatory approval for a third dose by that time. Officials are aiming to administer the booster shots about eight months after the second dose of the two-dose vaccines.