Biden presidency teeters on edge of collapse amid Kabul bombings 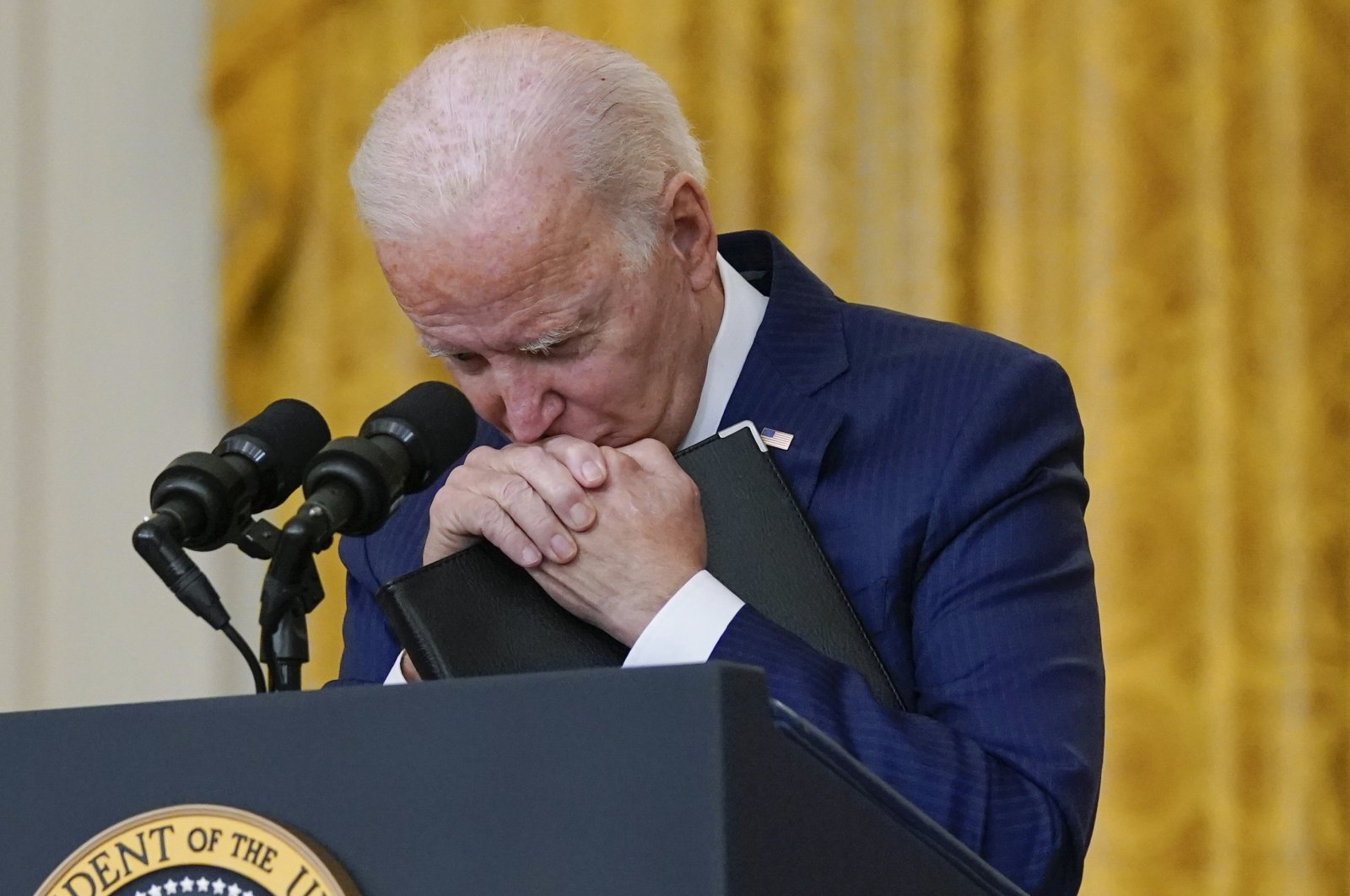 President Joe Biden pauses as he listens to a question about the bombings at Kabul Hamid Karzai International Airport that killed at least 12 U.S. service members, from the East Room of the White House, in Washington, D.C., U.S., Aug. 26, 2021.(AP Photo)
by DAILY SABAH WITH AGENCIES
Aug 27, 2021 10:27 am

The Biden administration has been shaken to the core by several suicide bombings at Afghanistan's Kabul Hamid Karzai International Airport that killed more than 100 innocent people, including 13 American soldiers

Joe Biden's presidency is teetering on the edge of impeachment as calls for his resignation echoed throughout the U.S. Congress after deadly explosions rocked Afghanistan's capital Kabul Thursday, leaving dozens of people dead and the world community in shock. The U.S. leader crumbled under questioning from media reporters amid weeks of chaotic American withdrawal from the war-torn country, a move that has been receiving the weight of criticism.

Eyes closing, voice cracking, U.S. President Joe Biden physically reflected the terrible blow to his presidency from the slaying of American service members during the desperate Kabul evacuation. The death toll from Thursday's twin bombings near the Kabul Hamid Karzai International Airport in Afghanistan rose to over 100 on Friday. According to Afghan and American officials, some 13 U.S. troops were among the dead.

Addressing the nation from the White House, Biden bowed his head for a moment of silence before taking questions from journalists pressing him on the bloody twist in the already tragic operation to shut down the 20-year war in Afghanistan. He appeared occasionally close to tears as he spoke of the dead "heroes." Biden blamed the Daesh terrorist group's offshoot in Afghanistan for the horrific tragedy and pledged to retaliate against the attack in Kabul.

With steel in his voice, he promised the attackers "we will hunt you down." There was no doubt Biden's presidency had been shaken to the core by the bombing at Kabul's airport as the leader pledged to "defend our interests in our people with every measure at my command.”

In January, he took office promising calm at home and respect for the United States abroad after the turbulent Donald Trump years. Now Biden's been left with a mountain to climb if he's to persuade the nation and America's partners that either goal remains achievable.

The 78-year-old Democrat was already reeling from the almost overnight collapse of the U.S.-backed government and U.S.-created army, leaving the handful of remaining U.S. troops and many thousands of U.S. citizens and allies at the Taliban's mercy. Working around the clock for 10 days, his administration had thought perhaps it could still pull triumph from disaster.

Despite intense pressure to extend Tuesday’s deadline, Biden has cited the threat of terrorist attacks as a reason to keep to his plan. The Taliban, back in control of Afghanistan two decades after they were ousted in a U.S.-led invasion following the 9/11 attacks, insist on the deadline. The Trump administration in February 2020 struck an agreement with the Taliban that called for it to halt attacks on Americans in exchange for the removal of all U.S. troops and contractors by May; Biden announced in April he would have them out by September.

Early Thursday in Washington, the White House proudly rolled out the latest remarkable figures: more than 95,000 people safely flown out since Kabul's fall to the Taliban. Then the bombs went off. Shutting himself away with aides in the Situation Room, Biden canceled a meeting of state governors and told visiting Israeli Prime Minister Naftali Bennett that their planned meeting in the Oval Office would have to wait until Friday. Throughout a day of meetings with national security staff, Biden was "somber" and "outraged," press secretary Jen Psaki said. "Any day where you'll lose service members is maybe the worst day of your presidency."

Biden didn't start the Afghan war. That was a Republican, George W. Bush. And Biden was the first of four presidents actually to follow through on promises to end the disaster. But as Biden himself said, the "buck stops" with him. That means he will not be able to escape fury and horror back home over the deaths of the servicepeople – or the political fallout.

"Joe Biden has blood on his hands," Republican congressperson Elise Stefanik said, according to remarks carried by Reuters. "This horrific national security and humanitarian disaster is solely the result of Joe Biden's weak and incompetent leadership. He is unfit to be commander-in-chief."

Republican Sen. Marsha Blackburn tweeted that Biden and all his top national security staff "should resign or face impeachment and removal from office." The Republican outcry was predictable. But the wider damage reflected in opinion polls will be more worrying for Biden.

While a USA Today/Suffolk University poll this week found overwhelmingly that Americans believe the Afghan war was not worth fighting, Biden isn't getting thanked. The poll found his overall approval at just 41%, with 55% disapproving.

"I don't know if Biden will be permanently damaged," Mark Rom, a professor of government at Georgetown University, told Agence France-Presse (AFP). "But the Republicans will do everything in their power to see that he is."

Charles Franklin, director of the Marquette Law School poll, said that given the unpopularity of the Afghan war, Biden may yet ride the disaster out. "The political question, once we have completely withdrawn, is whether the majority will be glad we aren't there anymore. If so, then the issue is likely to fade," he said.

Evacuation flights from Afghanistan resumed with new urgency on Friday, a day after two suicide bombings targeted the thousands of desperate people fleeing the Taliban takeover. The U.S. says further attempted attacks are expected ahead of the Tuesday deadline for foreign troops to leave, ending America’s longest war. Kabul residents said several flights took off Friday morning, while footage shared by a local Tolo TV correspondent showed the anxious crowd outside the airport as large as ever.

Gen. Frank McKenzie, the U.S. Central Command chief overseeing the evacuation, on Thursday said about 5,000 people were awaiting flights on the airfield. The scenes at the airport, with people standing knee-deep in sewage and families thrusting documents and even young children toward U.S. troops behind razor wire, have horrified many around the world as far-flung efforts continue to help people escape. But those chances are fading fast for many. Some U.S. allies have said they are ending evacuation efforts, in part to give the U.S. time to wrap up its evacuation work before getting 5,000 of its troops out by Tuesday.

Britain said Friday its evacuations from Afghanistan will end within hours, and the main British processing center for eligible Afghans has been closed. Defense Secretary Ben Wallace told Sky News there would be "eight or nine” evacuation flights on Friday, and they will be the last. British troops will leave over the next few days.

"We will process those people that we have brought with us, the 1,000 people approximately inside the airfield now," Ben Wallace said. "And we will seek a way to continue to find a few people in the crowd, where we can, but overall the main processing has now closed and we have a matter of hours."

The Spanish government said Friday that it had ended its evacuations out of Kabul, just over a week after it began airlifting its citizens.

"The Spanish evacuation of its Afghan collaborators and their families has been completed," the government said in a statement. Two final flights landed in Dubai early Friday morning, it added, according to Agence France-Presse (AFP).

Onboard were 81 Spanish citizens who had yet to leave Afghanistan, including embassy personnel, military and naval troops, four Portuguese troops and 85 Afghans who had been working for Spain, Portugal and NATO.

They will fly on to the military base of Torrejon de Ardoz, near Madrid, in the afternoon on an Air Europa plane, the government said. In total, the Spanish armed forces have evacuated 1,900 Afghans, employees and their families who were working for Spain, the United States, Portugal, the European Union, the United Nations and NATO, as well as the staff of the Spanish Embassy in Kabul.

Untold thousands of Afghans, especially ones who had worked with the U.S. and other Western countries, are now in hiding from the Taliban, fearing retaliation despite the group’s offer of full amnesty. The militant group has claimed it has become more moderate since its harsh rule from 1996 to 2001, when it largely confined women to their homes, banned television and music and held public executions. But Afghans in Kabul and elsewhere have reported that some Taliban members are barring girls from attending school and going door to door in search of people who had worked with Western forces. No one knows how effective the Taliban will be at combating Daesh terrorists who have been linked to previous brutal attacks in Afghanistan.