Over 100 killed in explosions at Afghanistan's Kabul airport 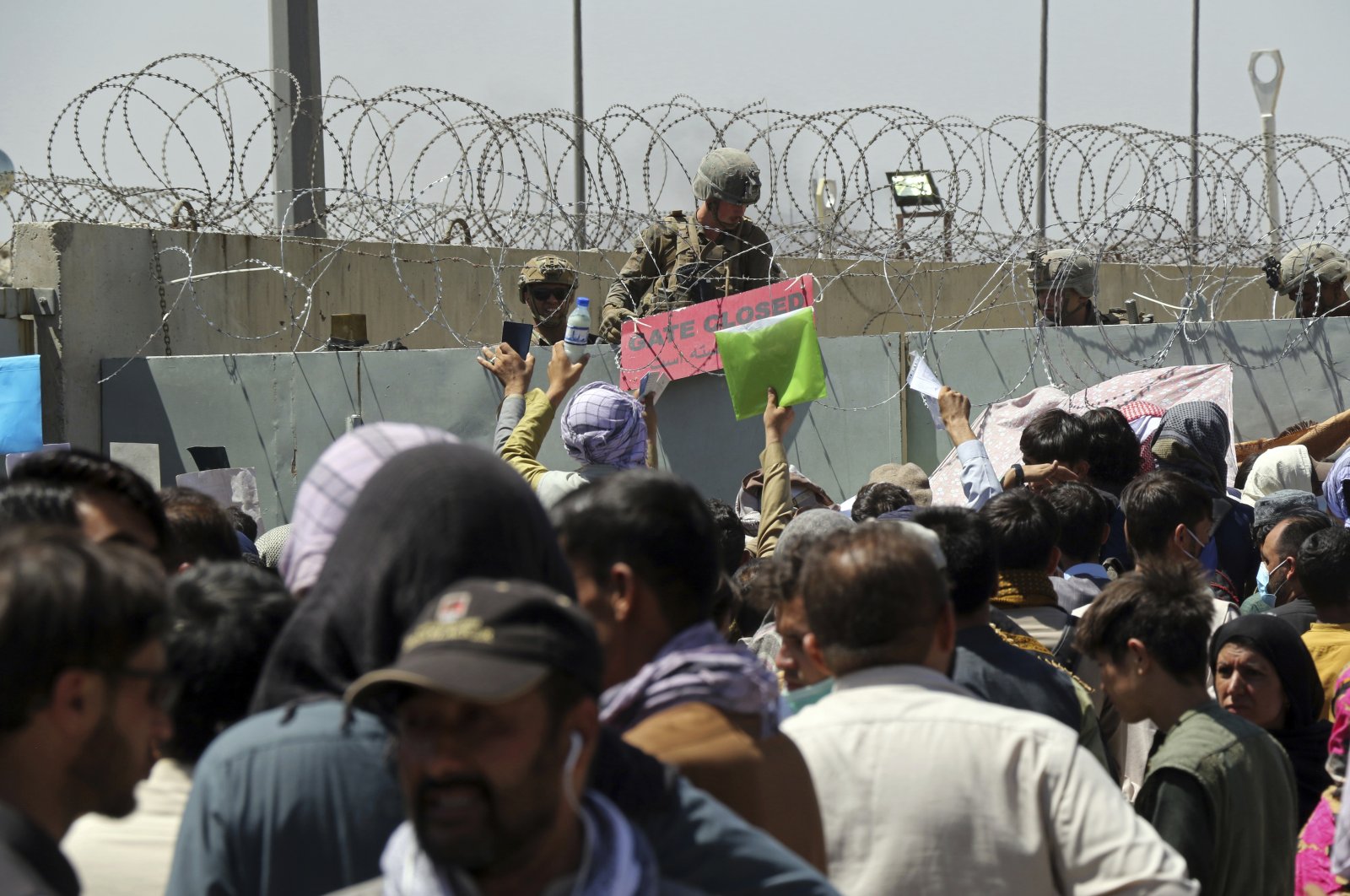 A U.S. soldier holds a sign indicating a gate is closed as hundreds of people gather, some holding documents, near an evacuation control checkpoint on the perimeter of Hamid Karzai International Airport, in Kabul, Afghanistan, Aug. 26, 2021. (AP Photo)
by Agencies Aug 26, 2021 4:51 pm
RECOMMENDED

The death toll from twin bombings near the Kabul Hamid Karzai International Airport in Afghanistan rose past 100 on Friday.

Later, two U.S. officials said that at least 12 U.S. service members were killed in the Afghanistan bombings, including 11 Marines and one Navy medic. Officials said a number of U.S. military troops were wounded. They warn, however, that the numbers may grow.

Later in the day, the U.S. general overseeing the evacuation from Afghanistan said the United States will “go after” the perpetrators of the Kabul airport attacks if they can be found.

Gen. Frank McKenzie said the attacks on Thursday were believed to have been carried out by fighters associated with the Daesh terror group’s Afghanistan affiliate.

He said the attacks, which killed 12 U.S. service members, would not stop the United States from continuing its evacuation of Americans and others. McKenzie warned there are still “extremely active” security threats at the airport in the Afghan capital.

“We expect these attacks to continue,” he said, adding that Taliban commanders have been asked to take additional security measures to prevent another suicide bombing on the airport’s perimeter. He said he sees no indication that the Taliban allowed Thursday’s attacks to happen.

Following McKenzie's statement, the Daesh claimed responsibility for the attack outside Kabul airport, the group's Amaq News Agency said on its Telegram channel.

There were, however, conflicting reports on the number of causalities.

The Pentagon said it could confirm there were casualties but did not provide a figure, adding that it expected the death toll to increase.

Fresh explosions were also heard later in the evening, with reports indicating that the total number of blasts had risen to six, according to the Anadolu Agency (AA) reporter on the ground.

Meanwhile, Taliban spokesman Zabihullah Mujahid said several explosions had been heard in Kabul in the evening, accusing U.S. forces of carrying out the blasts inside Kabul airport to destroy their equipment.

He also added that the explosions had not worried residents of the city as they were not against them.

Adam Khan, an Afghan waiting outside the airport, said the explosion went off in a crowd of people waiting to enter the airport. Khan, who said he was standing about 30 meters (100 feet) away, said several people appeared to have been killed or wounded, including some who lost body parts.

United Nations Secretary-General Antonio Guterres condemned the "terrorist attack which killed and injured a number of civilians" near the airport in Afghanistan's capital Kabul, a U.N. spokesman said.

"This incident underscores the volatility of the situation on the ground in Afghanistan, but also strengthens our resolve as we continue to deliver urgent assistance across the country in support of the Afghan people," U.N. spokesperson Stephane Dujarric told reporters.

He said that "as far as we know at this moment" there are no casualties among U.N. staff.

NATO chief also condemned the twin suicide bombings at the Kabul airport as a “horrific terrorist attack" that targeted desperate Afghans trying to leave the country and the alliance's efforts to evacuate them from Afghanistan.

Jens Stoltenberg said on Twitter after the explosions on Thursday: “I strongly condemn the horrific terrorist attack outside #Kabul airport. My thoughts are with all those affected and their loved ones. Our priority remains to evacuate as many people to safety as quickly as possible.”

Earlier Thursday, Western nations had warned of a possible attack on Kabul’s airport in the waning days of the massive evacuation efforts. Several countries urged people to avoid the airport, where an official said there was a threat of a suicide bombing. But just days – or even hours for some nations – before the evacuation effort ends, few appeared to heed the call.

Over the last week, the airport has been the scene of some of the most searing images of the chaotic end of America's longest war ever and the Taliban's takeover, as flight after flight took off carrying those who fear a return to the militants' brutal rule.

Already, some countries have ended their evacuations and begun to withdraw their soldiers and diplomats, signaling the beginning of the end of one of history's largest airlifts. The Taliban have so far honored a pledge not to attack Western forces during the evacuation, but insist the foreign troops must be out by the U.S.' self-imposed deadline of Aug. 31

Overnight, warnings emerged from Western capitals about a threat from the Daesh terrorist group, which likely has seen its ranks boosted by the Taliban’s freeing of prisoners during their blitz across the country.