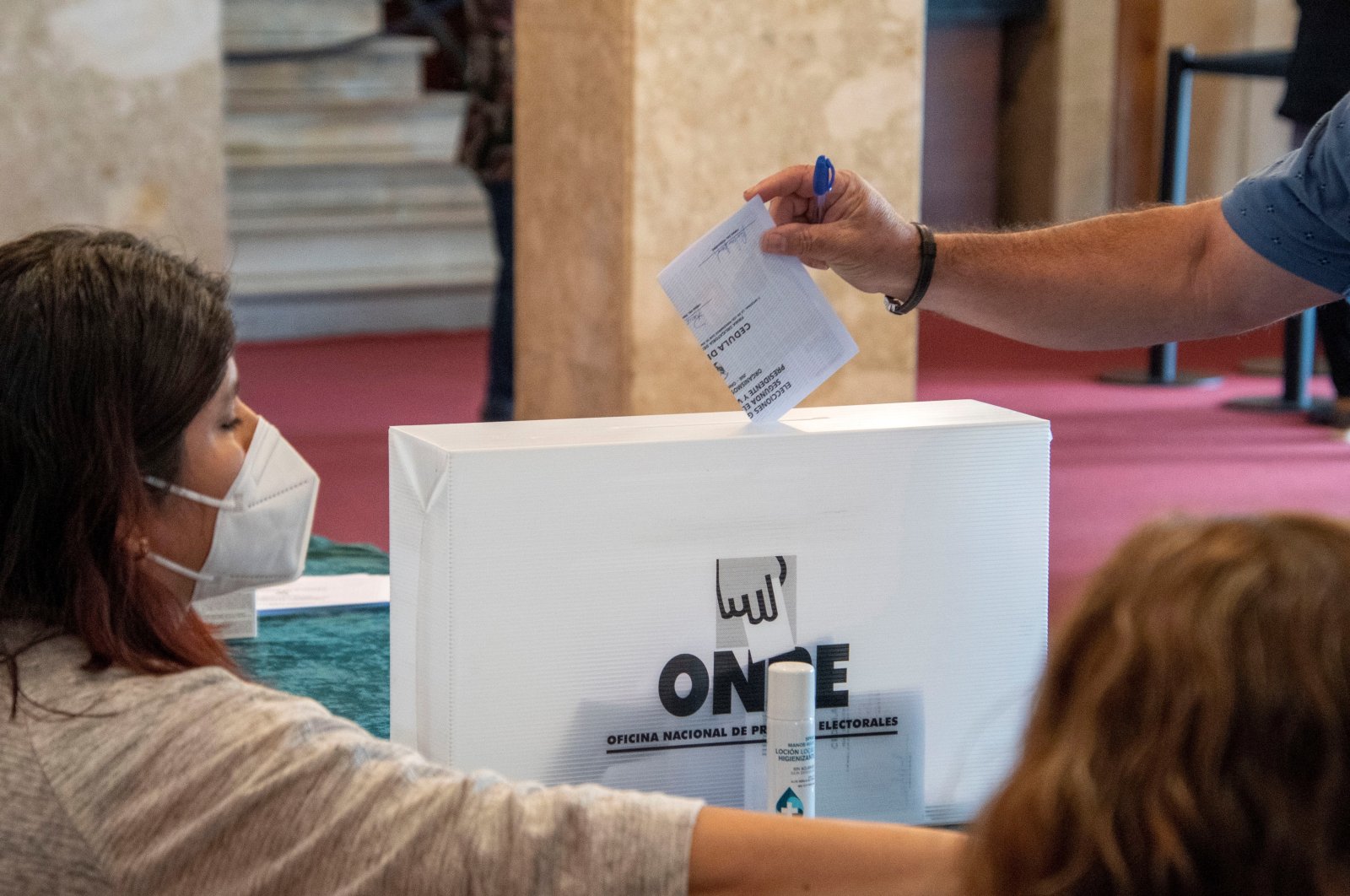 Peruvian residents in Spain cast ballots at Auditorium in Palma, Majorca, Spain, in order to vote for the second round of the Presidential elections in Peru, June 06, 2021. (EPA Photo)
by reuters Jun 06, 2021 4:43 pm
RECOMMENDED

Peru heads to the polls Sunday in an election that bitterly dividing Peruvians by class and geography, with urban and higher-income citizens preferring right-wing Keiko Fujimori while the rural poor support leftist political novice, Pedro Castillo.

Polls in the runoff election began to open at 7 a.m. (1200 GMT), with long lines building up early at some centers in the capital Lima of people bundled up against the cold of the southern hemisphere late autumn.

Citizens have been invited to vote according to the numbers on their identity cards in a bid to avoid large crowds gathering.

Opinion polls show the presidential race in a statistical dead heat but with Fujimori, who had earlier trailed Castillo, pulling slightly ahead.

Castillo, 51, an elementary school teacher and union leader, has galvanized support from Peru's rural poor – and scared investors – with pledges including to alter multinational companies’ tax regimes and rewriting the constitution.

He is from a remote village near the town of Tacabamba, in Peru's northern Andes, which on Saturday night cheered him as he made his way back home to vote.

He has previously warned against fraud in the election and said he would "be the first to summon the people" if he saw evidence of foul play. On Saturday night, however, he told crowds he would respect the result.

At an election breakfast in Lima on Sunday morning, Fujimori told supporters: "Keiko means hope. Let's all go out and vote."

Many Peruvians hold a deep mistrust of politicians following two decades in which five former presidents have been investigated or prosecuted for corruption.

Ruth Rojas, a Peruvian mother with a disabled daughter who said she lived in deep poverty, said she believed neither of the candidates’ vows.

"They promise everything until they get into government but then they forget about the poor, they just think of themselves and their own people," Rojas said.

Overseas Peruvians make up almost 4% of the 25 million on the electoral roll. Only 0.8% voted in the first round of the election in April, when COVID-19 lockdowns were commonplace.

However, the head of Peru's National Office of Electoral Processes, Piero Corvetto, said that with vaccination programs now further advanced in areas where Peruvian expatriates predominate – the United States, Spain, Argentina and Chile – turnout would likely be closer to 1.5%.