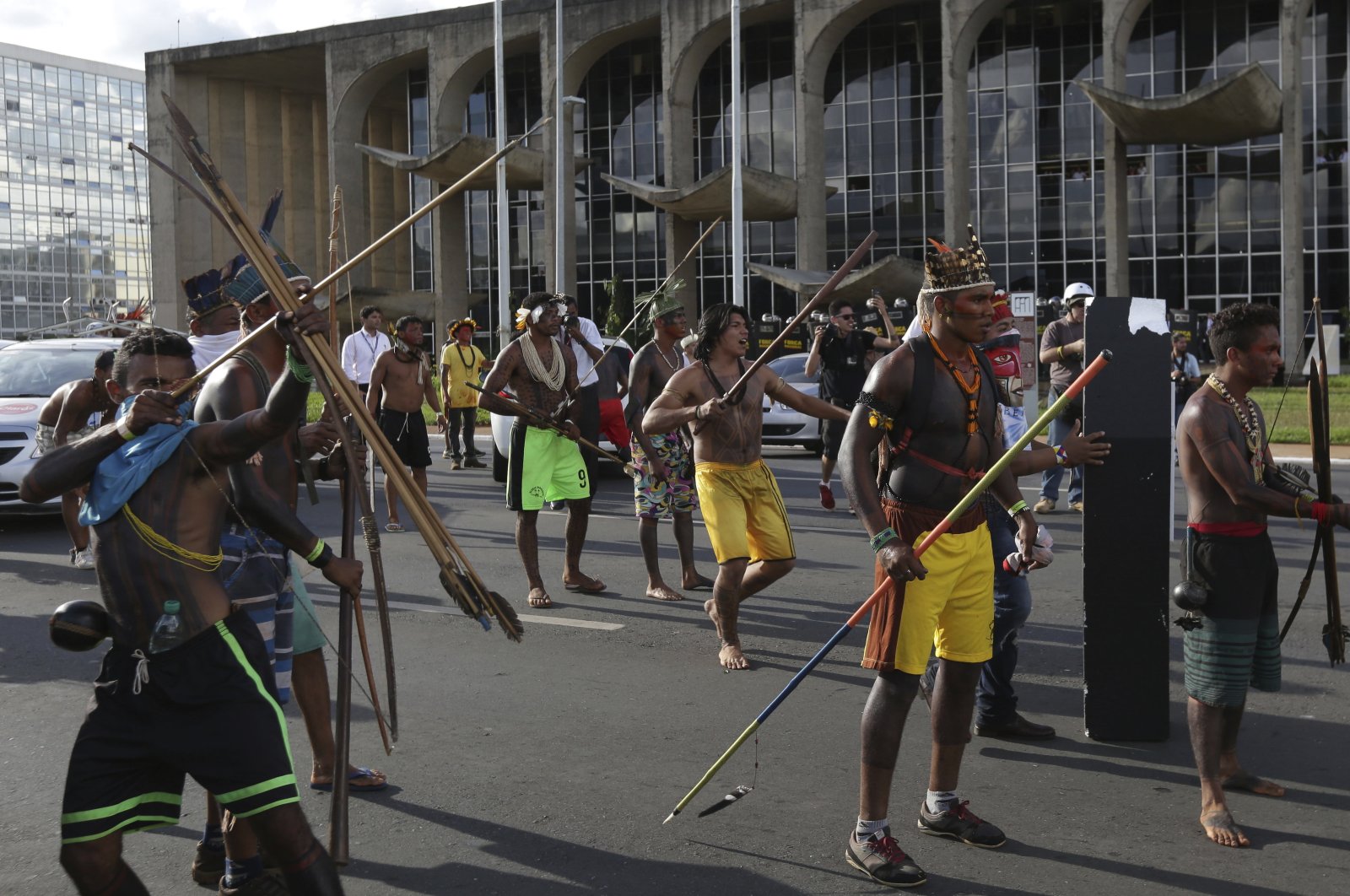 An indigenous man aims his arrow at police outside the National Congress during a protest for the demarcation of indigenous lands, Brasilia, Brazil, April 25, 2017. (AP Photo)
by REUTERS Sep 11, 2020 1:38 pm
RECOMMENDED

A top expert on isolated Amazon tribes in Brazil was killed by an arrow that struck him in the chest as he approached an indigenous group, friends and a police witness said Thursday.

Rieli Franciscato, 56, had spent his career as an official in the government's indigenous affairs agency Funai, working to set up reservations to protect Brazil's tribes.

On Wednesday, as he moved close to a hitherto uncontacted indigenous group, he was hit by an arrow above the heart in the forest near the Uru Eu Wau Wau reservation in the western Brazilian state of Rondonia near the border with Bolivia.

"He cried out, pulled the arrow from his chest, ran 50 meters and collapsed, lifeless," a policeman who accompanied the expedition said in an audio posted on social media.

The Kaninde Ethno-Environmental Defense Association he helped found in the 1980s said the indigenous group had no ability to distinguish between a friend or a foe from the outside world.

His death comes at a time when indigenous people in Brazil are under increasing threat from invasions by illegal land grabbers, loggers and gold miners, emboldened by the policies of far-right President Jair Bolsonaro who wants to develop the Amazon and reduce the size of indigenous reservations.

"We are feeling bewildered by so many deaths in this Brazil that no longer respects indigenous rights," said Ivaneide Cardozo, Franciscato's friend and co-founder of the Kaninde association.

The leading authority on Brazil's remaining isolated tribes and a former head of Funai, Sydney Possuelo, said Bolsonaro had kept his campaign promise to destroy the agency that is meant to defend the rights of indigenous people.

Possuelo said the government had defunded Funai and left it without staff needed for security at its isolated posts just as increasing land invasions increase the risk of violent clashes.

Brazil's presidency did not immediately respond to a request for comment. Bolsonaro has repeatedly proposed the need to integrate the indigenous peoples, who he has described as living "like cave men," into broader Brazilian society.

"Rieli was a calm, methodical, soft-spoken man who knew the dangers very well, but he was alone and so he went to ask the police to accompany him," Possuelo said. The presence of police, Possuelo explained, might have triggered the attack.