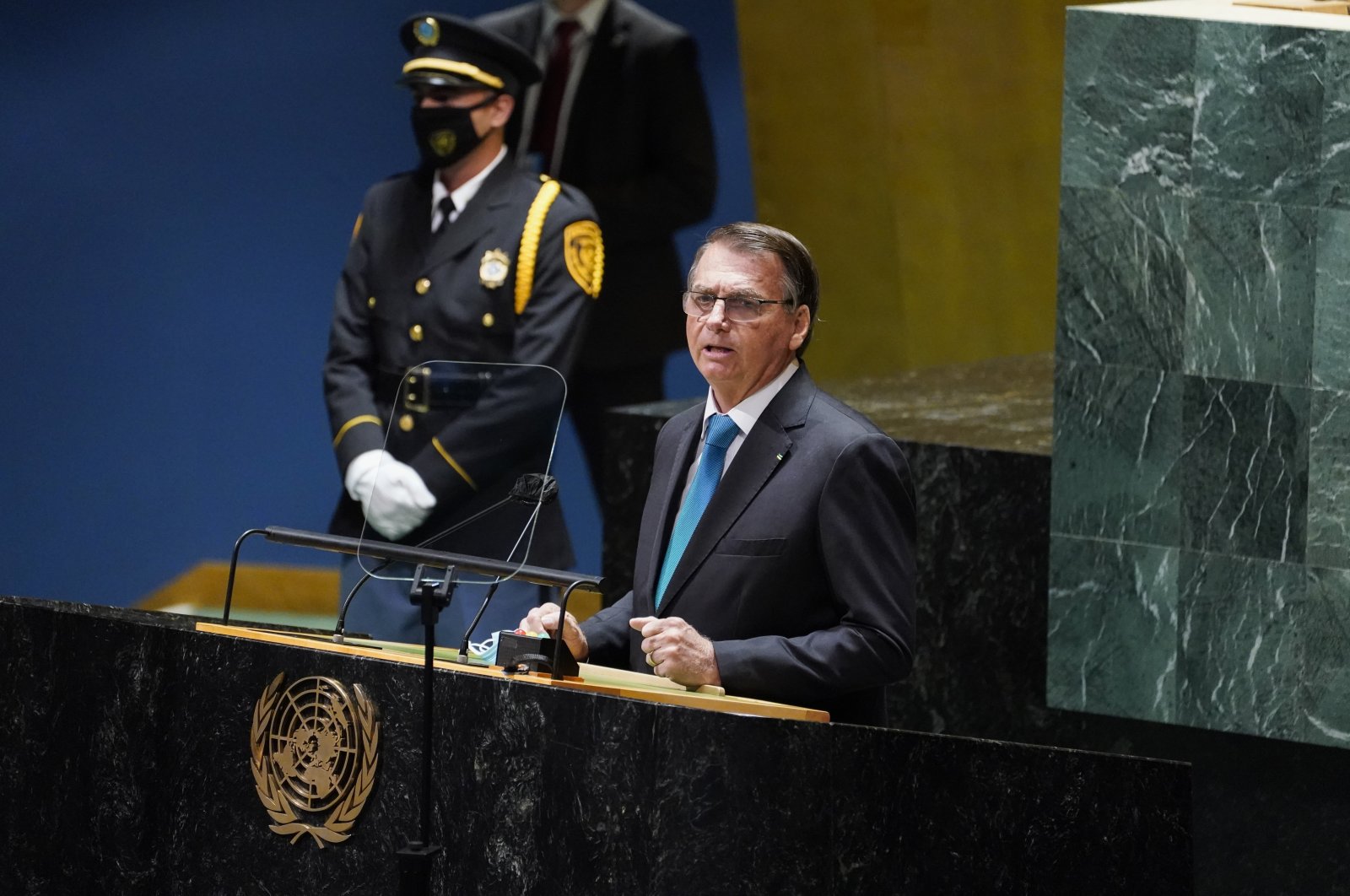 Brazil's far-right President Jair Bolsonaro delivered a short address on Tuesday at the 76th UN General Assembly as he faces the challenge of improving the country's global image.

His speech seemed more inclined to a candidate than a sitting president, nodding to his more staunch supporters, claiming there is no corruption in his administration and taking stabs at the media.

Bolsonaro said he intended to "present (to the General Assembly) a Brazil different from that published in newspapers or seen on TV."

Facing a delicate political moment, with falling popularity and growing pressure, Bolsonaro raised expectations of a more moderate speech before the U.N., which did not happen.

He instead chose to distort facts in favor of his narrative.

The highlight of his remarks was his insistent defense of the so-called "early treatment" against coronavirus with drugs that have been proven ineffective. "I, myself, was one of those who underwent ‘initial treatment,'" he said. The Brazilian president has insisted on the thesis since the beginning of the pandemic, which became a focus of an ongoing probe by the Senate, which is also investigating the irregular purchase of vaccines.

Bolsonaro also attacked the lockdown, a measure broadly adopted around the world as a way to contain the spread of the virus, and he minimized the power of vaccines.

"Our government has taken a stand against the ‘health passport' or any vaccine-related obligations," he said at the global forum.

A negationist, the Brazilian extreme right-wing president was seen wearing a mask when arriving at the U.N. headquarters in New York, a rare scene in Brazil, where he usually refuses to wear it even in public appearances.

Bolsonaro called mass demonstrations on Sept. 7 in favor of his administration "the biggest in Brazil's history," saying millions flocked to the streets to "show they do not give up democracy, individual freedoms and support for our government."

He failed to mention that many protesters demanded the Supreme Court be shut and justices jailed, as well as insisting on a military intervention, which is unconstitutional in Brazil.

For the record, previous demonstrations, such as those against former President Dilma Rousseff in 2013 and the campaign for the end of the dictatorship and the return of direct voting in 1984, were much bigger.

Brazil is responsible for the opening speech at the General Assembly annual meeting, a tradition that dates to the beginnings of the U.N. when Oswaldo Aranha, then head of the Brazilian delegation, presided over the Assembly's First Special Session in 1947. The Brazilian head of state speaks just before the U.S., the U.N. host country.

The Brazilian leader arrived in New York on Monday and immediately became the focus of images that are being considered "shameful" by many in Brazil. The only G20 leader not to have been vaccinated for the coronavirus, Bolsonaro and his team, including four ministers, were forced to eat standing on the sidewalk in front of a pizza restaurant.

Upon meeting British Prime Minister Boris Johnson, Bolsonaro said he "still" had not taken the jab but in Brazil he insists that he will not be immunized.

"Take (COVID-19 vaccine) AstraZeneca everyone. I took it twice," said Johnson, to which Bolsonaro replied "Not yet," gesturing "no" with his finger. "I had COVID. I have a very high immunization rate," he said.

Also late Monday, the Brazilian delegation was involved in confusion with anti-Bolsonaro protesters.

In addition, a member of the Brazilian delegation visiting the General Assembly tested positive for COVID-19, according to multiple reports.

A small group shouted "genocide" and "assassin" in front of the residence of the Brazilian mission to the U.N.

At one point, Brazilian Minister of Health Marcelo Queiroga, from inside a van, rose from his seat and showed the middle finger to protesters, who responded with shouts and the same gesture.