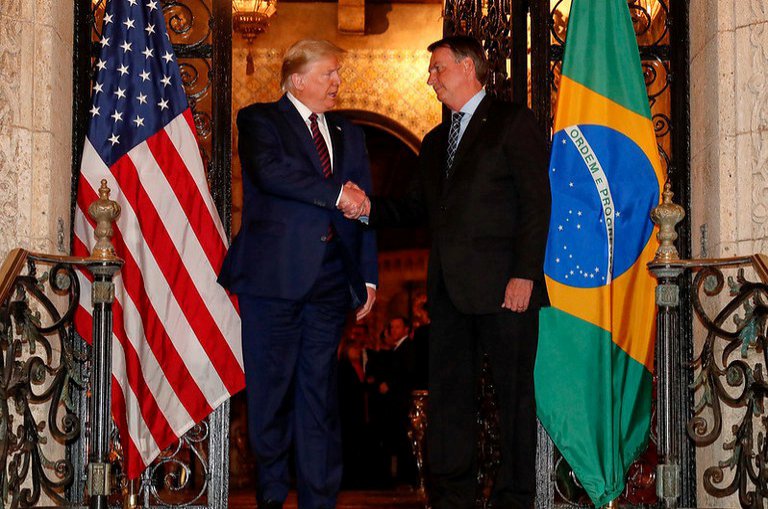 Brazilian President Jair Bolsonaro said Friday he has tested negative for the new coronavirus, after a scare over a trip on which at least one infected member of his staff rubbed shoulders with U.S. President Donald Trump.

"The Armed Forces Hospital and (diagnostic laboratory) Sabin have returned a negative test result for COVID-19 for the President of the Republic Jair Bolsonaro," said a post on the far-right leader's Facebook page, along with a picture of him flashing an obscene arm gesture at the press.

A report by a major Rio de Janeiro newspaper earlier said Bolsonaro’s first test for the novel coronavirus has come back positive.

His son said on his Twitter account that Bolsonaro has been tested for coronavirus but is not showing any symptoms of the virus.

Bolsonaro had previously referred to the outbreak of the new coronavirus as mainly a "fantasy."

“During the past year, obviously, we have had moments of crisis. A lot of that is fantasy. And coronavirus, which is not (what) all the mainstream media makes it out to be,” he said.

The Brazilian leader returned to his country this week after meeting Saturday with U.S. President Donald Trump at his Mar-a-Lago resort in Miami.

Meanwhile, a senior Brazilian official who attended weekend events with Trump in Florida tested positive for the coronavirus, marking the first time that someone known to have the virus was near the president. Trump does not plan to be tested or go into self-quarantine, the White House said.

Bolsonaro’s communications director, Fabio Wajngarten, tested positive just days after traveling with Bolsonaro to a meeting with Trump and senior aides in Florida. White House press secretary Stephanie Grisham said in a statement Thursday that "exposures from the case are being assessed, which will dictate next steps.”

"Both the President and Vice President had almost no interactions with the individual who tested positive and do not require being tested at this time," Grisham said.

For most people, the new coronavirus causes only mild or moderate symptoms, such as fever and cough. For some, especially older adults and people with existing health problems, it can cause more severe illnesses, including pneumonia.

The vast majority of people recover from the new virus. According to the World Health Organization (WHO), people with mild illness recover in about two weeks, while those with more severe symptoms may take three to six weeks to recover. In mainland China, where the virus first exploded, more than 127,000 people have been diagnosed and more than 68,000 have recovered so far.

Wajngarten initially denied a report on Wednesday that he had been tested for the virus, saying on his social media account that his health was fine. He is now in self-quarantine at home, according to the statement.