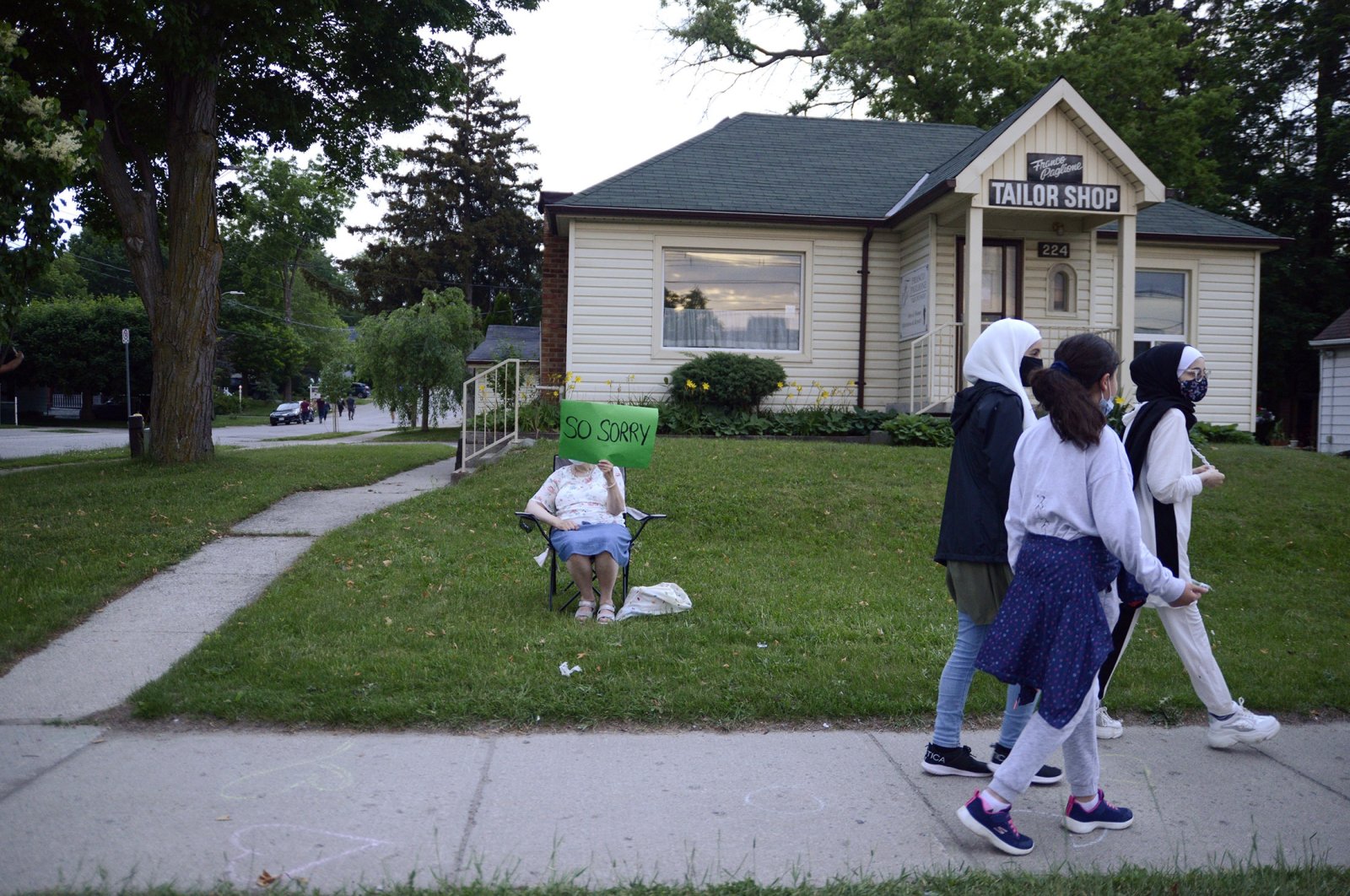 An old woman apologizes for the incident while Muslim girls walk past her during a vigil to remember the four family members killed by a vehicle in a hate-motivated crime in London, Ontario, Canada, June 8, 2021. (Getty Images)
by Anadolu Agency Jul 14, 2021 10:00 am
RECOMMENDED

Another attack against a Muslim mother and daughter in Canada's Ontario on Tuesday was labeled as a "hate crime" by Canadian police, who said the man chased and threatened to kill his victims.

The mother, 62, and daughter, 26, were walking through a parking lot in the city of Hamilton, west of Toronto, when a vehicle almost slammed into one of them, police said. Both were wearing hijabs and were the target of racial slurs.

The pair ran across the street and hid in some bushes as the 40-year-old suspect began a search, calling out that if he was able to find them, he would kill them, police said.

One screamed and ran for help, and bystanders intervened and the suspect got into his vehicle and drove away, the Canadian Broadcasting Corporation (CBC) reported. The suspect was arrested, but details were not provided by the police.

The National Council of Canadian Muslims told the CBC that it had received a statement from the family.

"We are shaken but unbroken after the attack on our family," the statement said. "Let us be clear: this individual attempted to terrorize our family."

The incident was also frightening, coming as it did after the recent murder of four members of a Muslim family deliberately run down by a vehicle in London, Ontario, a city about 80 miles west of Hamilton. Police said that crime was motivated by religious hate.

"In light of the London attack, this is incredibly terrifying for our family," the statement said. "Enough is enough. The government must commit to taking stronger action. Our family could have been seriously hurt – and we cannot allow these things to keep happening."

Following the London killings, the federal government said it would convene an emergency summit on Islamophobia on July 22.

Police are investigating the Hamilton incident as a hate crime, and the suspect faces charges for assault with a weapon, dangerous operation of a motor vehicle and uttering death threats, the CBC reported.