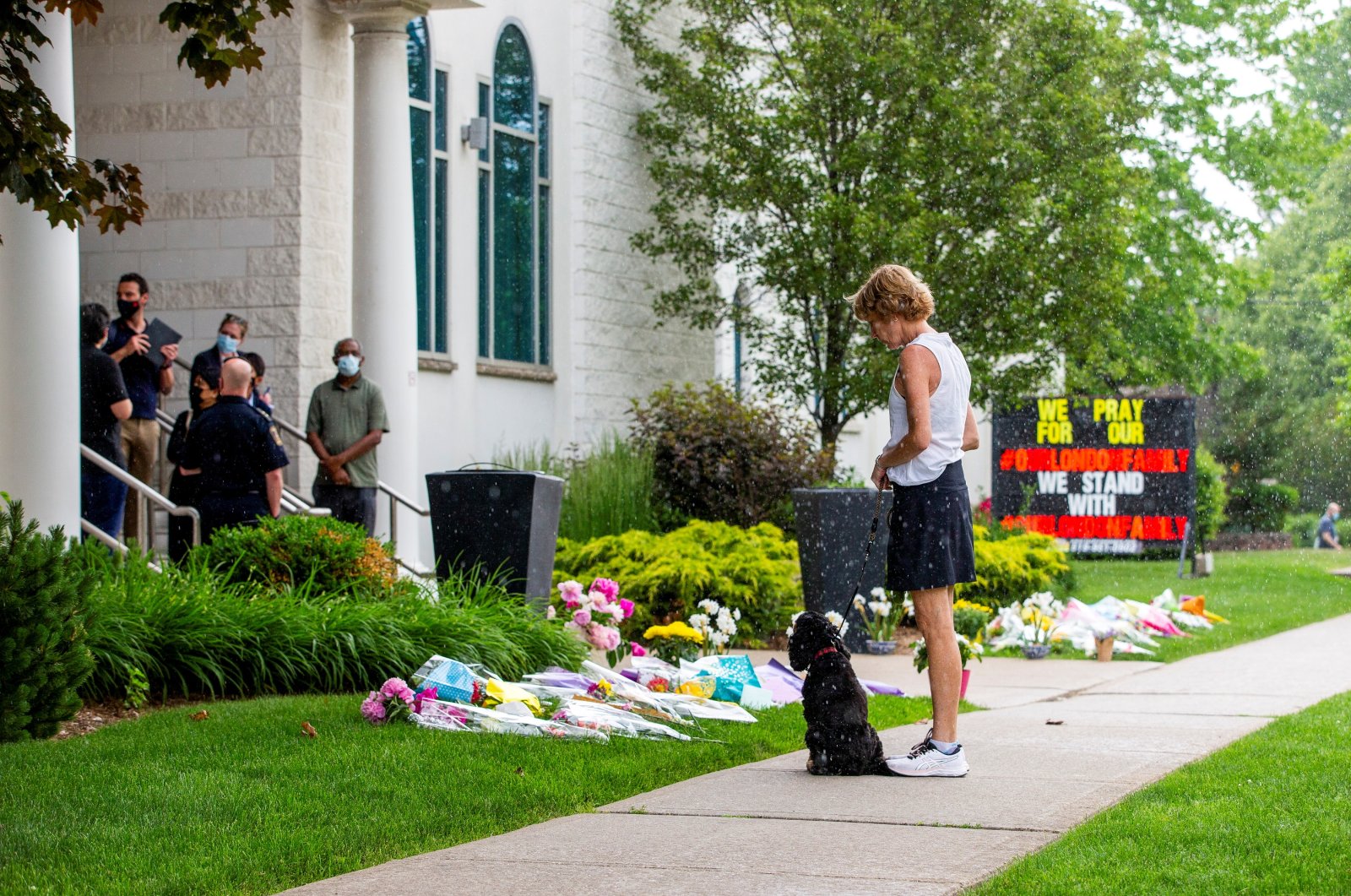 A woman pays her respects at the London Muslim Mosque, which is located about 500 meters from where police arrested the suspect of a hate-motivated Islamophobic terror attack that killed four members of a Muslim family, in London, Ontario, Canada, June 8, 2021. (Reuters Photo)
by Anadolu Agency Jun 08, 2021 9:35 pm
RECOMMENDED

Authorities on Tuesday released the names of the four members of a Muslim family that were killed in a "cowardly terrorist attack" in Canada.

Salman Afzaal, 46, his wife Madiha, 15-year-old daughter Yumna and Salman's 74-year-old mother – were killed when a half-ton truck driven by a 20-year-old deliberately jumped the curb and slammed into the victims who were out for a Sunday walk.

The couple's nine-year-old son, Fayez, survived but he is in the hospital with serious but non-life-threatening injuries.

The killings sent shock waves across the country and Prime Minister Justin Trudeau expressed his sorrow Tuesday in parliament as politicians paid tribute to the victims, first with a moment of silence and then with words.

"Lately, a lot of Canadians have been enjoying evening walks to get a bit of fresh air after long days at home during this pandemic," Trudeau said. "On Sunday, in London, Ontario, that's what a grandmother, two parents, and two children went out to do ... but unlike every other night, this family never made it home.

"Their lives were taken in a brutal, cowardly, and brazen act of violence. This killing was no accident. This was a terrorist attack, motivated by hatred, in the heart of one of our communities," he said.

The leaders of the other three political parties also condemned the attack.

"Freedom to worship can't exist without freedom from fear, and every Canadian has a right to that," said Erin O'Toole, head of the Conservative Party.

More details about the Afzaal family have emerged since the killings.

Fayez attends the London Islamic School, while his sister, Yumna, graduated from the school last year and was a ninth-grade student at Oakridge Secondary School, the Canadian Broadcasting Corporation (CBC) reported.

Their mother, Madiha, completed post-graduate work in civil and environmental engineering so she could get a job and work on environmental issues. Salman was described as a humble man who was involved in projects at the local mosque.

A vigil is planned for 7 p.m. Tuesday in London. Trudeau and other political leaders are expected to attend.

The driver, Nathaniel Veltman, was taken into custody 10 minutes after the attack and has been charged with four counts of first-degree murder and one count of attempted murder.