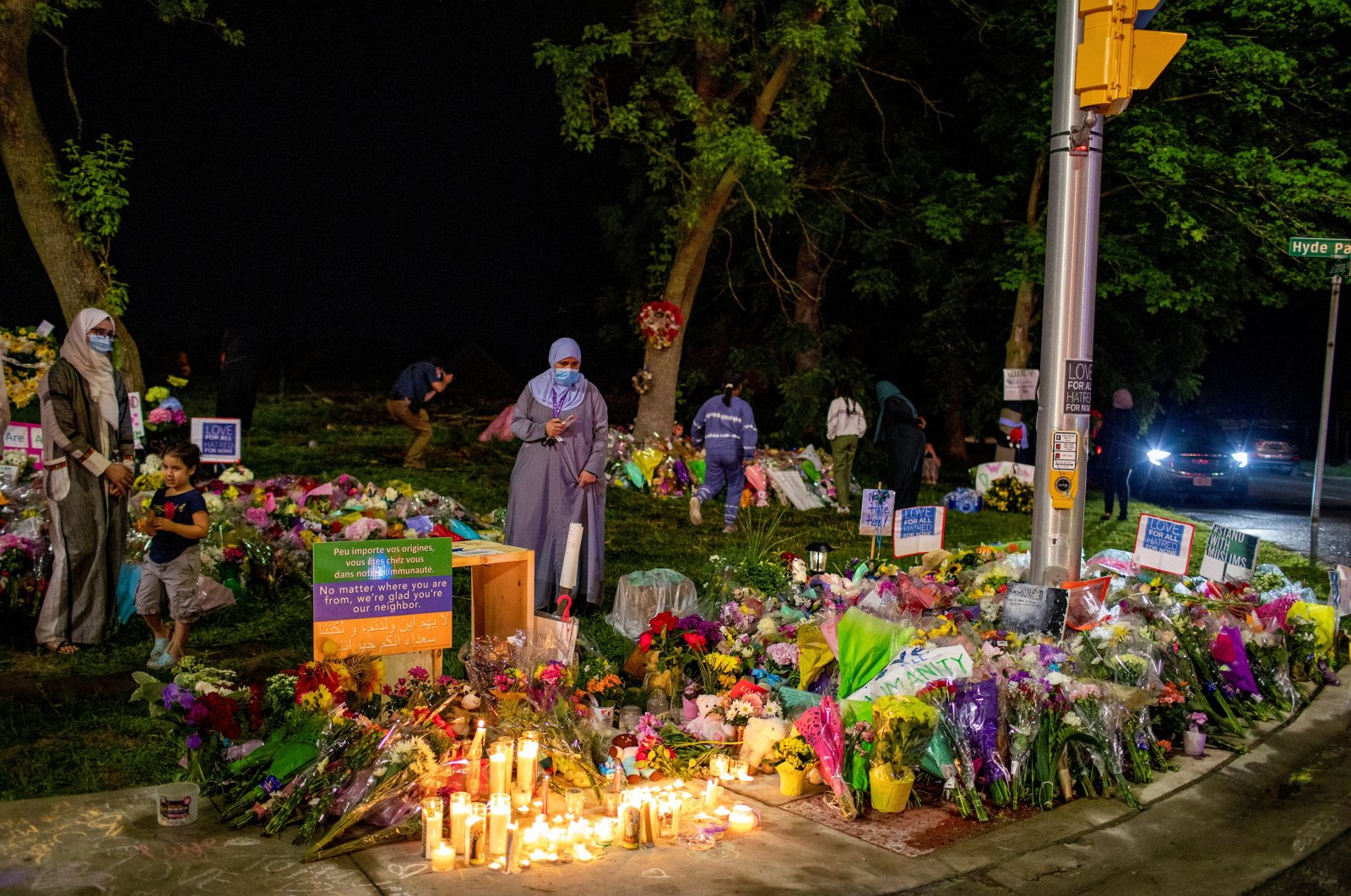 People gather at a makeshift memorial at the fatal crime scene where a man driving a pickup truck jumped the curb and ran over a Muslim family in what police say was a deliberately targeted Islamophobic hate crime, in London, Ontario, Canada, June 8, 2021. (Reuters Photo)
by Reuters Jun 09, 2021 11:22 pm
RECOMMENDED

Canada will soon unveil measures to crack down on online extremism following the killing of a Muslim family, a crime that police said was motivated by Islamophobia, a government minister said on Wednesday.

Four members of the family were killed on Sunday when a pickup truck jumped the curb and ran them over in London, Ontario, 200 km (124 miles) southwest of Toronto. A 20-year-man has been charged with four counts of first-degree murder.

"Our government is continuing to do what is necessary, obviously working with the social media platforms, to combat online hate and we'll have more to say on specific measures in the coming weeks," Intergovernmental Affairs Minister Dominic LeBlanc told a news conference. He did not give details.

There is no evidence that the suspect, Nathaniel Veltman, had any connection to hate groups.

Canadian Prime Minister Justin Trudeau, facing complaints from religious and ethnic communities that Ottawa has not done enough to combat bigotry and racism, promised on Tuesday to intensify efforts to fight far-right groups, in part by cracking down on online extremism.

"We don't yet know all the causes or reasons, but there is probably an element of online incitation to violence," Trudeau told a virtual conference on digital governance on Wednesday.

Guilbeault has said for months that legislation to address online hate is coming. But even if the government introduces a bill, it has no chance of being adopted by Parliament before legislators rise for their summer break later this month.

Stephanie Carvin, an assistant professor and security expert at Ottawa's Carleton University, said the most likely option in the short term was to ban more extremist organizations.

"The problem with targeting these ideologically motivated violent extremist groups is that they just resurface," she said by phone, calling for policies to target the far-right movement as a whole.

Another important element was addressing the role played by social media platforms and ensuring they adhere to their own policies on various kinds of hate speech, she said.