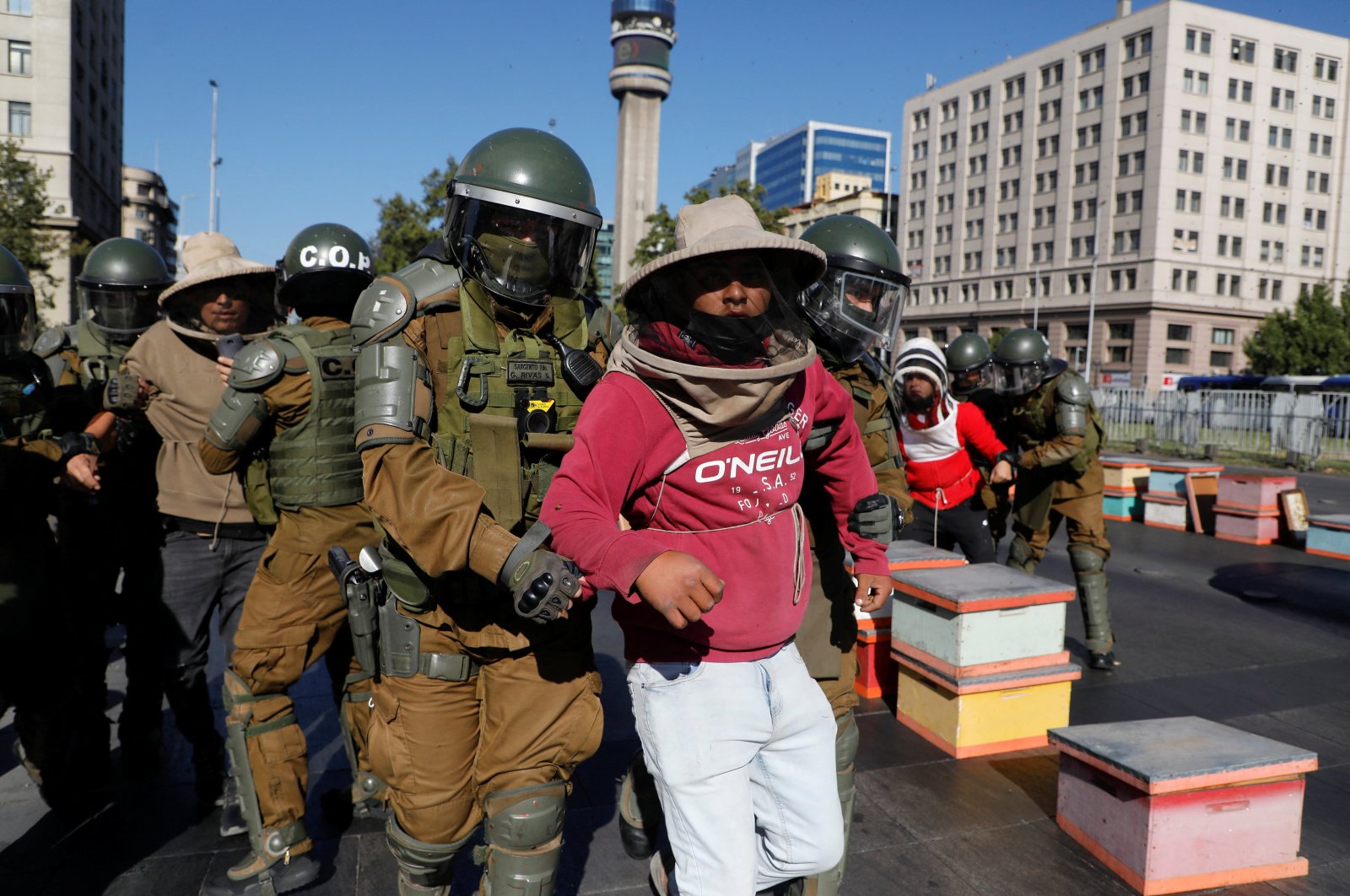 Beekeepers who demanded government measures to face the persistent drought that affects the country are detained by riot police after they blocked the street with honeycombs full of bees in front of the Chilean presidential palace, Santiago, Chile, Jan. 3, 2022. (Reuters Photo)
by REUTERS Jan 04, 2022 11:16 pm
RECOMMENDED

Seven police officers were stung during a protest organized by beekeepers in front of Chile's presidential palace in Santiago on Monday, according to local officials. Four beekeepers were detained after the demonstration.

Honey production has been hurt by a long-term drought in Chile that has withered the bees' food sources such as flowers and crops. While drought is not uncommon in Chile, the current megadrought has persisted since 2010 and climate change is at least partly to blame, scientists say.

The beekeepers set around 60 beehives, which contained an estimated 10,000 bees, on the avenue in front of the palace.

The beekeepers want government reform to improve honey prices or to provide subsidies to honey producers. They have asked to meet with President Sebastian Pinera.

One of the beekeepers, Jose Iturra, told local reporters that the drought in the Colina commune north of Santiago was killing the local bee population.

"Bees are dying," Iturra said. "There would be no life if the bees die. That's what we wanted to highlight with this demonstration."

A representative for the Ministry of Agriculture in the Santiago region said the agency was also concerned about the effect the drought was having on the bees. The government has been providing aid for months to 20 communities experiencing severe water shortages, Omar Guzman, the regional agricultural secretary, told reporters.

Some passers-by were alarmed by the risk the bees posed to the public.

"It's dangerous for the people who are allergic (to bees) because they can cause death," one local said.

Seven national police officers, called Carabiniers, were stung trying to arrest the beekeepers and move the beehives out of the street, police officials said, and were taken to the hospital.

Droughts and rising temperatures from climate change have affected bee populations worldwide. A 2020 study published in the journal Science found that populations fell by around 50% in North America and 17% in Europe in one generation.