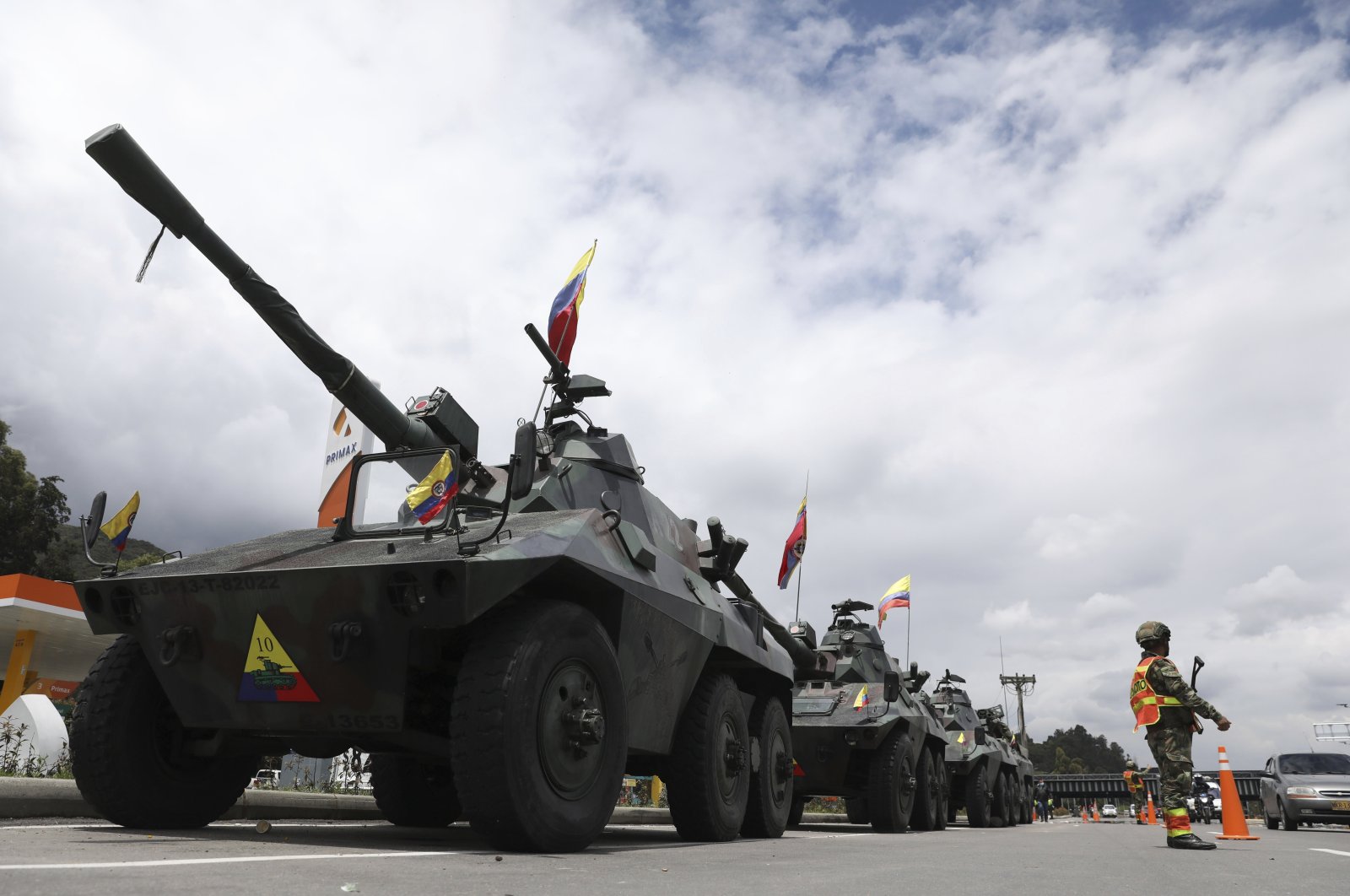 Soldiers and army tanks guard toll booths to keep protesters from damaging them, on the outskirts of Bogota, Colombia, May 4, 2021. (AP Photo)
by ASSOCIATED PRESS May 29, 2021 9:06 am
RECOMMENDED

After at least three people died in increasingly violent protests and talks to end the social uprising have failed so far, Colombia's President Ivan Duque announced Friday the deployment of military forces to the city of Cali

Duque repeated his assertion that the protests, which have been raging for a month, are infiltrated by illegal armed groups and promised to deploy "all intelligence capabilities” to demonstrate this.

"This deployment will almost triple our capacity throughout the province in less than 24 hours, ensuring assistance in nerve centers where we have seen acts of vandalism, violence and low-intensity urban terrorism,” said the president, speaking from Cali, the city in southwest Colombia that has become the epicenter of the nationwide anti-government protests.

The deployment comes after Attorney General Francisco Barbosa said an agent with the institution was allegedly killed by civilians after opening fire.

"According to the information collected so far, he shot several people causing the death of civilians ... then he ended up dead at the hands of people at the scene,” Barbosa said in a statement.

Jose Miguel Vivanco, director of the Americas Division of Human Rights Watch, urged Duque to prohibit the use of firearms by state agents and said the organization had corroborated videos from Cali showing armed men in civilian clothing shooting.

Juliette de Rivero, representative in Colombia of the United Nations High Commissioner for Human Rights, called for an end to violence, also citing cases of "civilians shooting” in Cali.

Protests were held Friday in other parts of Colombia as the country marked a month since the start of the largest protests here in decades. More than 40 people have been killed and 2,200 civilians and police injured.

The protests erupted when Duque proposed a wide-ranging tax increase but continued even after he backed off, transformed into a general outcry against growing poverty and inequality in a country where the unemployment rate doubled over the past year of pandemic.

The government and the National Strike Committee have not been able to establish conditions to open negotiations. The protesters are demanding the government guarantee the right to social protest while Duque's administration won't budge from its demand that road blockades that have created widespread shortages be lifted.

"What we are seeing is a delaying action by the government which does not understand the complexity of the moment," said Francisco Maltes, president of the Central Workers Union, who blamed the Duque government for not signing a guarantee agreement and not responding to requests for a date to start talks.

Sandra Borda, an analyst and expert on protests, said there is a crisis of representativeness in both the government, which has limited room for maneuver and the National Strike Committee, which does not represent all the sectors that are demonstrating.

"We are facing a scenario that I do not think will be resolved soon, because the only thing the government can control with any level of effectiveness are state forces and therefore it continues to try to resolve the situation with a heavy hand. When the state forces are excessive there is more indignation, more anger and more fuel is added to the fire of the demonstrations,” she said.