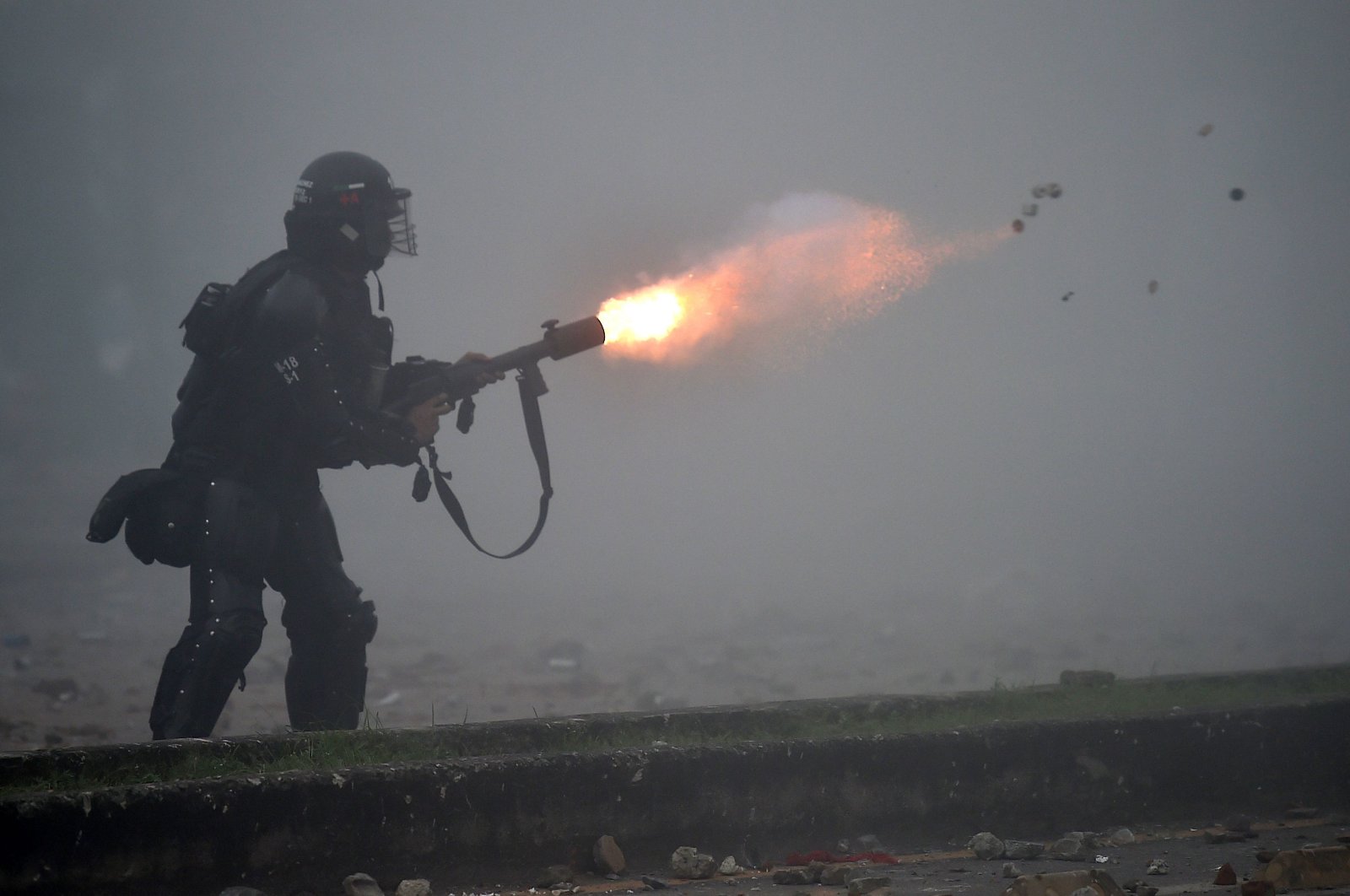 A riot police officer fires tear gas at demonstrators during clashes to protest against a tax reform bill launched by President Ivan Duque, despite the fact that the president then ordered the proposal be withdrawn from Congress, in Cali, Colombia, May 3, 2021. (AFP Photo)
by Agencies May 04, 2021 2:36 pm
RECOMMENDED

The United Nations human rights office and the European Union both condemned the "excessive use of force" by security officers in Colombia, after numerous deaths during days of protests against a proposed tax reform.

The Office of the United Nations High Commissioner for Human Rights (OHCHR) voiced Tuesday "profound shock" at a further incident overnight in the city of Cali, saying police "opened fire" on demonstrators, reportedly killing and injuring a number of people.

The rights office called for calm on all sides ahead of a planned mass protest on Wednesday and stressed that security forces should only use firearms as a last resort.

"What we can say clearly is that we have received reports, and we have witnesses, is (of) excessive use of force by security officers, shooting, live ammunition being used, beatings of demonstrators and as well detentions," she said.

The European Union in turn called on Colombia's security forces to avoid a heavy-handed response to the protests, calling for calm and condemning the violence that led to deaths.

"We condemn the deaths of all the people who have been killed during those protests, the reports are saying at least 19 victims and also one police officer," an EU spokesperson told a regular briefing.

"It is really a priority to stop the escalation of this violence and to avoid any disproportionate use of force by security forces," the spokesperson said.

Protesters in Colombia on Monday called for a new mass rally after 19 people died and more than 800 were wounded in clashes during five days of demonstrations, according to official figures.

"Despite an announcement from the Colombian presidency on May 2 that the tax reform bill would be removed from Congress, the protests, which began on April 28, have been continuing, with calls for a massive demonstration tomorrow, May 5," Hurtado said.

She emphasized that "the majority of the protests to date have been peaceful."

"Given the extremely tense situation, with soldiers as well as police officers deployed to police the protest, we call for calm.

"We remind the state authorities of their responsibility to protect human rights, including the right to life and security of person, and to facilitate the exercise of the right to freedom of peaceful assembly.

"We stress also that law enforcement officers should abide by the principles of legality, precaution, necessity and proportionality when policing demonstrations. Firearms can only be used as a measure of last resort against an imminent threat to life or of serious injury," Hurtado said.

Hurtado also said U.N. officials were trying to verify the casualty toll from the incident overnight Monday in Cali.

"We are deeply alarmed at developments in the city of Cali in Colombia overnight, where police opened fire on demonstrators protesting against tax reforms, reportedly killing and injuring a number of people," she said.

"Our office in Colombia is working to verify the exact number of casualties and establish how this terrible incident came about in Cali.

"We express our profound shock at the events there and stress our solidarity with those who have lost their lives, as well as the injured and their families."