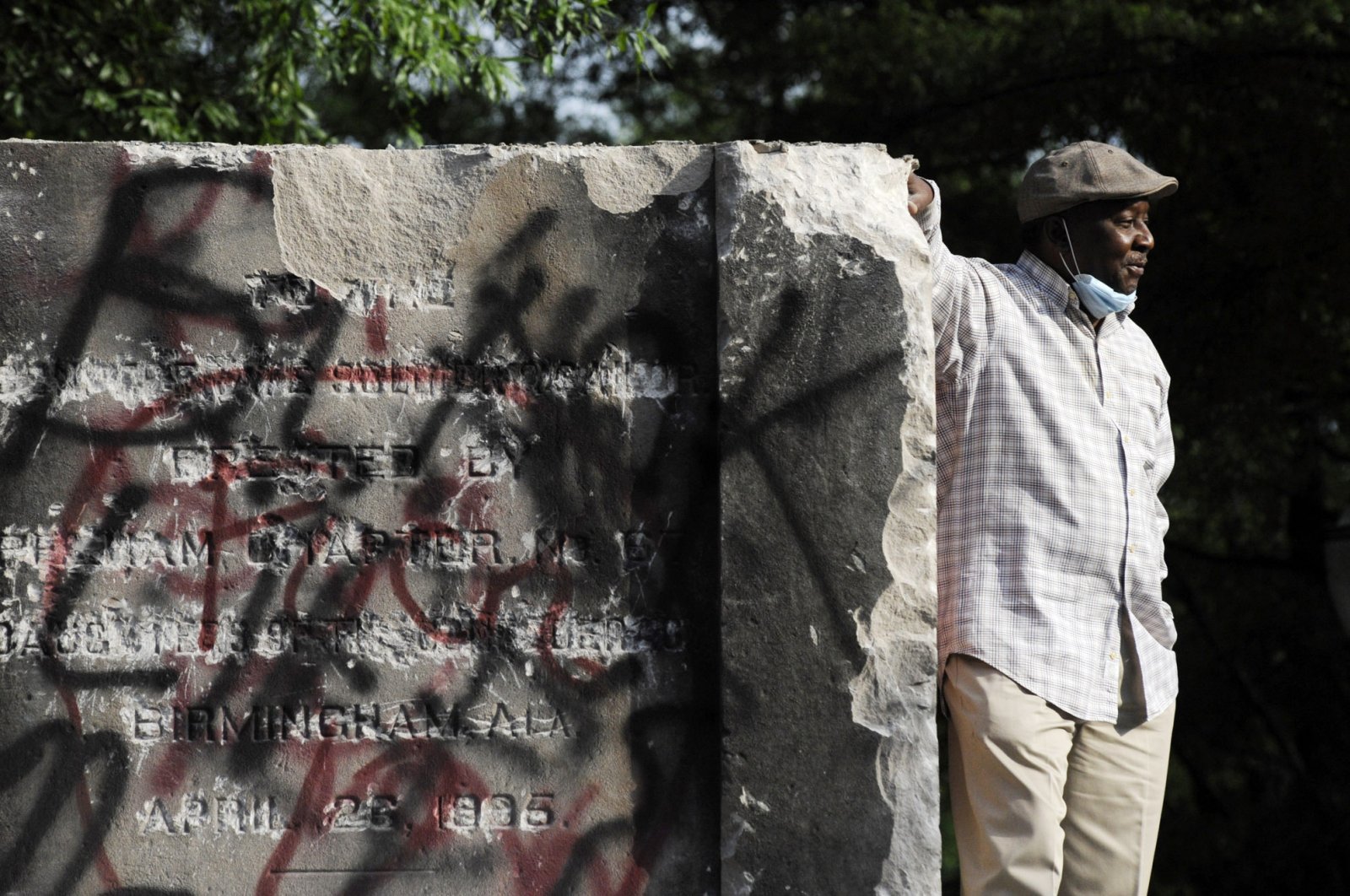 Robert Walker poses for a photograph on the remains of a Confederate memorial that was removed overnight in Birmingham, Ala., Tuesday, June 2, 2020. (AP Photo)
by ASSOCIATED PRESS Jun 02, 2020 6:49 pm
RECOMMENDED

The base of a massive Confederate monument in Alabama's largest city was all that remained Tuesday after crews dismantled the towering obelisk and trucked it away in pieces. Other symbols came down elsewhere, leaving an empty pedestal and a bare flagpole.

Workers hired by the city of Birmingham began removing the top portion of the 115-year-old monument from Linn Park late Monday. By daybreak, the pedestal was the only thing left, covered with graffiti from protests against police brutality.

Sarah Collins Rudolph, whose sister Addie Mae Collins died in a racist church bombing that killed three other black girls in the city in 1963, came to see the remains. She lowered a protective face mask to take in the sight.

"I'm glad it's been removed because it has been so long. It's a hate monument,” said Rudolph. She was seriously injured in the blast at 16th Street Baptist Church and testified against Ku Klux Klansmen who were convicted in the killings.

Confederate symbols across the South have been targeted for vandalism during demonstrations sparked by the death in police custody of George Floyd in Minneapolis. Now even some of their longtime defenders have decided to remove them.

In Alexandria, Virginia, it was the United Daughters of the Confederacy that took action early Tuesday, removing the statue of a soldier gazing south from Old Town since 1889. And outside Tampa, Florida, a Sons of Confederate Veterans chapter lowered a huge Confederate battle flag that has long been flown in view of two interstate highways.

Birmingham finally took action about a day after protesters tried to remove the monument themselves, during one of the many nationwide protests sparked by the death of Floyd.

Live video from overnight showed a flatbed truck hauling off the stone pieces in the early morning hours. It's unclear where they were being taken. Crews were expected to return later Tuesday to finish the job, a city official said.

The monument had been the subject of a protracted court battle between the city and state.

Alabama authorities said Birmingham would face a $25,000 assessment for violating a state law that bans the removal of such monuments. Mayor Randall Woodfin said the fine would be much more affordable than the cost of continued unrest in the city.

Work to remove the monument began on Monday, which happened to be Alabama's holiday honoring Confederate President Jefferson Davis, who was sworn in on the steps of the state Capitol in Montgomery. There, on the same day, someone knocked over a statue of Confederate Gen. Robert E. Lee outside a mostly black high school named after him, news outlets reported.

In Alexandria, a city spokesman said the United Daughters of the Confederacy informed the city on Monday that it would remove the statue, and the city’s only role was to provide traffic support. By morning, the pedestal was all that was left. City officials were not told where the statue was taken.

Titled "Appomattox,” it depicts a solitary Confederate soldier, his head bowed slightly. In 1890, a state law was passed barring local officials from ever removing it. That law was repealed earlier this year.

Alexandria Mayor Justin Wilson tweeted photos of the removal on Tuesday, saying "Alexandria, like all great cities, is constantly changing and evolving.”