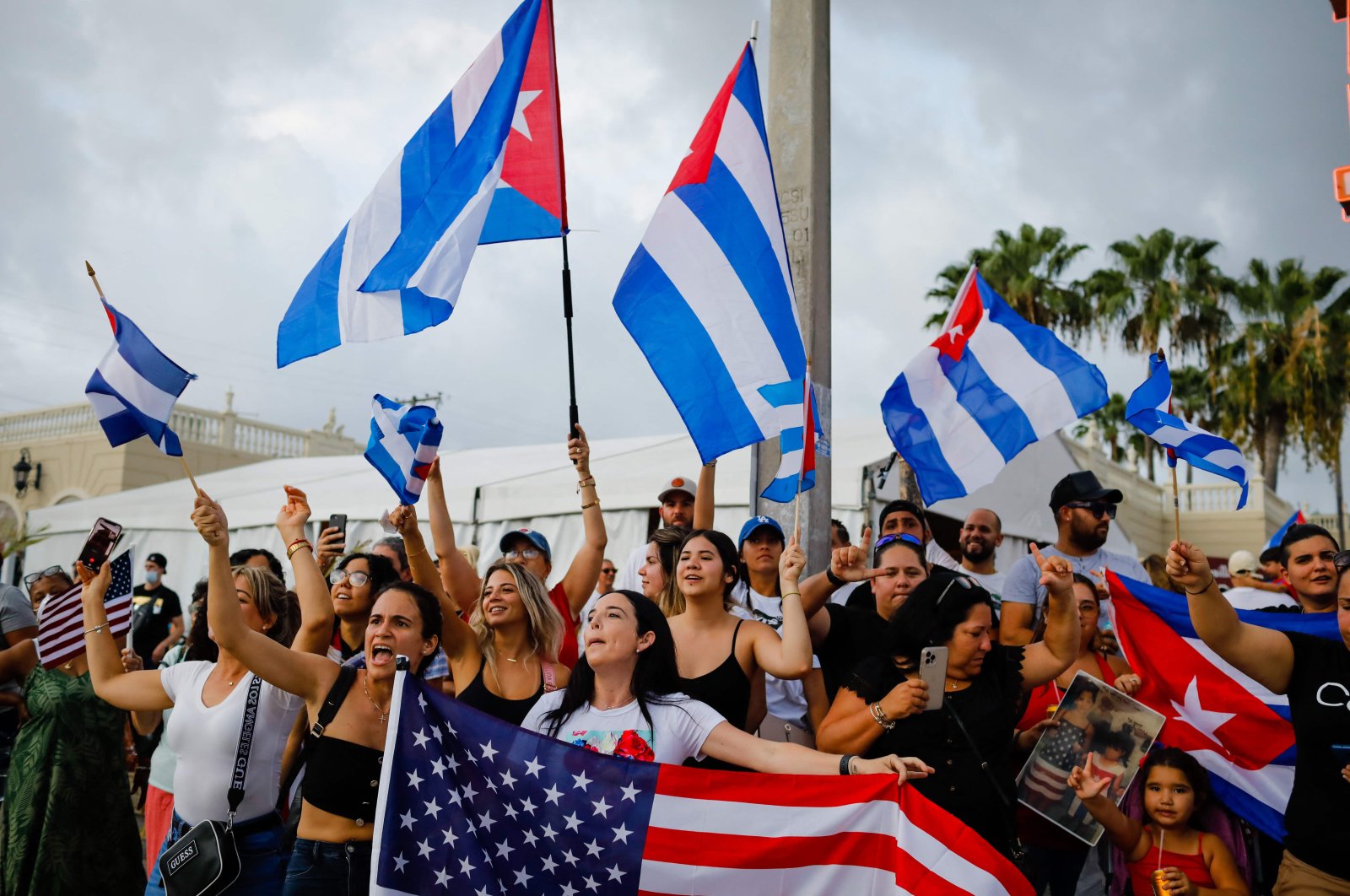 People demonstrate, some holding Cuban and US flags, during a protest against the Cuban government at Versailles Restaurant in Miami, Florida, July 12, 2021.(Photo by Eva Marie UZCATEGUI / AFP)
by ASSOCIATED PRESS Jul 13, 2021 8:43 am
RECOMMENDED

Cuba's President Miguel Diaz-Canel accused Cuban Americans of using social media to spur a rare outpouring of weekend protests over high prices and food shortages as his U.S. counterpart voiced support for the demonstrations after "decades of repression."

The demonstrations in several cities and towns were some of the biggest displays of antigovernment sentiment seen in years in tightly controlled Cuba, which is facing a surge of coronavirus cases as it struggles with its worst economic crisis in decades as a consequence of U.S. sanctions imposed by previous administrations.

Many young people took part in Sunday's demonstrations in Havana. Protests were also held elsewhere on the island, including in the small town of San Antonio de los Banos, where people objected to power outages and were visited by Díaz-Canel. He entered a few homes, where he took questions from residents.

Authorities appeared determined to put a stop to the demonstrations. More than a dozen protesters were detained, including a leading Cuban dissident who was arrested trying to attend a march in the city of Santiago, 559 miles (900 kilometers) east. The demonstrators disrupted traffic in the capital for several hours until some threw rocks and police moved in and broke them up. Internet service was spotty, possibly indicating an effort to prevent protesters from communicating with each other.

"We've seen how the campaign against Cuba was growing on social media in the past few weeks,'' Diaz-Canel said Monday in a nationally televised appearance in which his entire Cabinet was present. "That's the way it's done: Try to create inconformity, dissatisfaction by manipulating emotions and feelings.”

In a statement Monday, U.S. President Joe Biden said Cuban protesters were asserting their basic rights. "We stand with the Cuban people and their clarion call for freedom and relief from the tragic grip of the pandemic and from the decades of repression and economic suffering to which they have been subjected by Cuba’s authoritarian regime,'' Biden said.

The U.S. urges the Cuban government to serve their people ‘’rather than enriching themselves,'' Biden added. U.N. deputy spokesman Farhan Haq on Monday stressed the U.N. position "on the need for freedom of expression and peaceful assembly to be respected fully, and we expect that that will be the case.”

The demonstrations were extremely unusual on an island where little dissent against the government is tolerated. The last major public demonstration of discontent, over economic hardship, took place nearly 30 years in 1994.

Last year, there were small demonstrations by artists and other groups, but nothing as big or widespread as what erupted this past weekend. In the Havana protest on Sunday, police initially trailed behind as protesters chanted, "Freedom!” "Enough!” and "Unite!” One motorcyclist pulled out a U.S. flag, but it was snatched from him by others.

"We are fed up with the queues, the shortages. That’s why I’m here,” one middle-age protester told The Associated Press (AP). He declined to identify himself for fear of being arrested later. Later, about 300 pro-government protesters arrived with a large Cuban flag, shouting slogans in favor of the late President Fidel Castro and the Cuban revolution.

Some assaulted an AP videojournalist, smashing his camera. AP photojournalist Ramón Espinosa was then beaten by a group of police officers in uniforms and civilian clothes; he suffered a broken nose and an eye injury.

The demonstration grew to a few thousand in the vicinity of Galeano Avenue and the marchers pressed on despite a few charges by police officers and tear gas barrages. People standing on many balconies along the central artery in the Centro Habana neighborhood applauded the protesters passing by. Others joined in the march.

About 2 1/2 hours into the march, some protesters pulled up cobblestones and threw them at police, at which point officers began arresting people and the marchers dispersed. AP journalists counted at least 20 people who were taken away in police cars or by individuals in civilian clothes. Although many people tried to take out their cellphones and broadcast the protest live, Cuban authorities shut down internet service throughout the afternoon Sunday.

On Monday, Cuban authorities were blocking Facebook, WhatsApp, Instagram and Telegram, said Alp Toker, director of Netblocks, a London-based internet monitoring firm. "This does seem to be a response to social media-fueled protest,” he said.

Twitter did not appear to be blocked, though Toker noted Cuba has the ability to cut it off if it wants to.