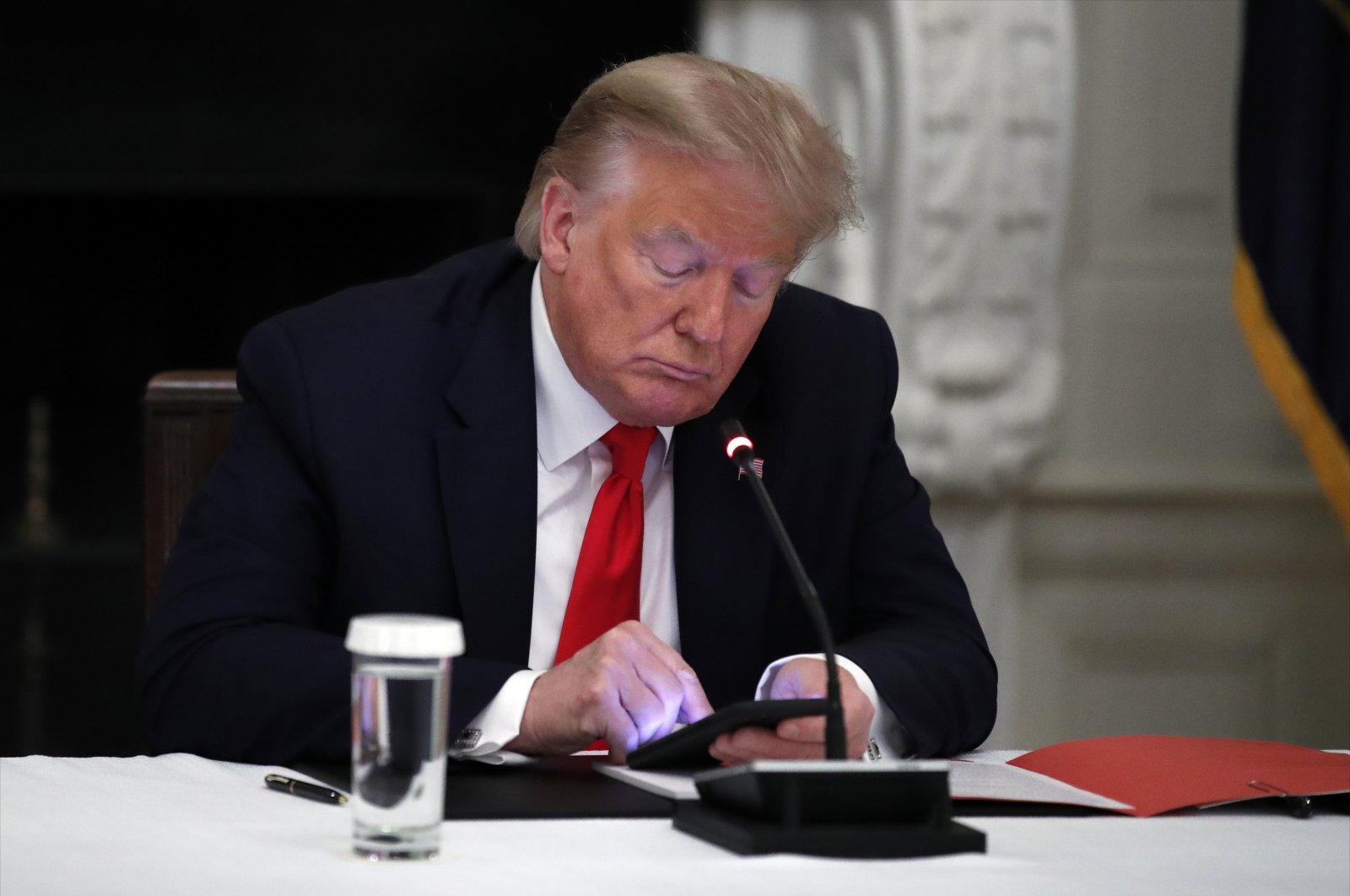 U.S. President Donald Trump looks at his phone during a roundtable with governors on the reopening of America's small businesses, in the State Dining Room of the White House in Washington, D.C., June 18, 2020. (AP Photo)
by Daily Sabah with AP Jan 10, 2021 11:50 am

A big fan of social media platforms, U.S. President Donald Trump is seeking a new stage for his contentious ideas after Twitter banned his account citing "the risk of further incitement of violence" following the deadly insurrection at the U.S. Capitol this week

A great connoisseur of social media, U.S. President Donald Trump, who pushed more than a dozen fake news stories into the world through his Twitter account, is now desperately seeking a new platform for sharing his controversial thoughts.

The company recently ended the president's nearly 12-year run on Friday after he posted a video that repeated false claims about election fraud and praised the rioters who stormed the Capitol earlier this week. Facebook also suspended Trump's account through Jan. 20 and possibly indefinitely amid plans circulating online for future armed protests around the inauguration of President-elect Joe Biden.

One Twitter wag joked that lights flickering on and off at the White House are Trump signaling to his followers in Morse code after Twitter and Facebook squelched the president for inciting a rebellion. Though deprived of his big online megaphones, Trump does have alternative options of much smaller reach.

The far-right friendly Parler may be the leading candidate, though Google and Apple have both removed it from their app stores and Amazon decided to boot it off its web hosting service. That could knock it offline for a week, Parler’s CEO said.

Trump may launch his own platform but that won't happen overnight, and free speech experts anticipate growing pressure on all social media platforms to curb incendiary speech as Americans take stock of Wednesday’s violent takeover of the U.S. Capitol by pro-Trump supporters.

In shuttering his account, Twitter cited a tweet to his 89 million followers that he planned to skip President-elect Joe Biden’s Jan. 20 inauguration, which gives rioters license to converge on Washington once again.

Facebook and Instagram have suspended Trump at least until Inauguration Day. Twitch and Snapchat also have disabled Trump’s accounts, while Shopify took down online stores affiliated with the president and Reddit removed a Trump subgroup. Twitter also banned Trump loyalists, including former national security advisor Michael Flynn in a sweeping purge of accounts promoting the QAnon conspiracy theory and the Capitol insurrection. Some had hundreds of thousands of followers.

In a statement Friday, Trump said, "We have been negotiating with various other sites, and will have a big announcement soon, while we also look at the possibilities of building out our own platform in the near future.”

Experts had predicted Trump might pop up on Parler, a 2-year-old magnet for the far-right that claims more than 12 million users and where his sons Eric and Don Jr. are already active. Parler hit headwinds, though, on Friday as Google yanked its smartphone app from its app store for allowing postings that seek "to incite ongoing violence in the U.S.”

Apple followed suit on Saturday evening after giving Parler 24 hours to address complaints it was being used to "plan and facilitate yet further illegal and dangerous activities.”

Public safety issues will need to be resolved before it is restored, Apple said. Amazon struck another blow Saturday, informing Parler it would need to look for a new web-hosting service effective midnight Sunday. It reminded Parler in a letter, first reported by Buzzfeed, that it had informed it in the past few weeks of 98 examples of posts "that clearly encourage and incite violence” and said the platform "poses a very real risk to public safety.”

Parler CEO John Matze decried the punishments as "a coordinated attack by the tech giants to kill competition in the marketplace. We were too successful too fast,” he said in a Saturday night post, saying it was possible Parler would be unavailable for up to a week "as we rebuild from scratch.” Earlier, Matze complained of being scapegoated.

"Standards not applied to Twitter, Facebook or even Apple themselves, apply to Parler.” He said he "won’t cave to politically motivated companies and those authoritarians who hate free speech.”

Losing access to the app stores of Google and Apple – whose operating systems power hundreds of millions of smartphones – severely limits Parler's reach, though it will continue to be accessible via a web browser. Losing Amazon Web Services will mean Parler needs to scramble to find another web host, in addition to the re-engineering.

Gab is another potential landing spot for Trump, but it too has had troubles with internet hosting. Google and Apple both booted it from their app stores in 2017, and it was left internet-homeless for a time the following year due to anti-Semitic posts attributed to the man accused of killing 11 people at a Pittsburgh synagogue. Microsoft also terminated a web-hosting contract.

David Kaye, a University of California-Irvine law professor and former U.N. special rapporteur on free speech believes the Parlers of the world will also face pressure from the public and law enforcement as will little-known sites where further pre-inauguration disruption is now apparently being organized. They include MeWe, Wimkin, TheDonald.win and Stormfront, according to a report released Saturday by The Alethea Group, which tracks disinformation. Kaye rejects arguments by U.S. conservatives including the president’s former United Nations ambassador, Nikki Haley, that the Trump ban savaged the First Amendment, which prohibits the government from restricting free expression.

"Silencing people, not to mention the President of the US, is what happens in China not our country,” Haley tweeted. "It’s not like the platforms’ rules are draconian. People don’t get caught in violations unless they do something clearly against the rules,” said Kaye. In addition to individual citizens' freedoms, "the companies have their freedom of speech, too.”

While initially arguing the need to be neutral on speech, Twitter and Facebook gradually yielded to public pressure especially after the so-called Plandemic video emerged early in the COVID-19 pandemic that urged people not to wear masks, noted civic media professor Ethan Zuckerman of the University of Massachusetts-Amherst. Zuckerman expects the Trump de-platforming will spur important online shifts. First, there may be an accelerated splintering of the social media world along ideological lines.

"Trump will pull a lot of audience wherever he goes,” he said. That could mean more platforms with smaller, more ideologically isolated audiences. A splintering could push people towards extremes, or make extremism less infectious, he said. "Maybe people looking for a video about welding on YouTube will no longer find themselves being offered an unrelated QAnon video."

"I suspect you will see efforts from the right arguing that there shouldn’t be regulations on acceptable speech,” he said. "I think you will see arguments from the democratic side that speech is a public health issue.”