Devastating floods in Canada, US state of Washington kill 1 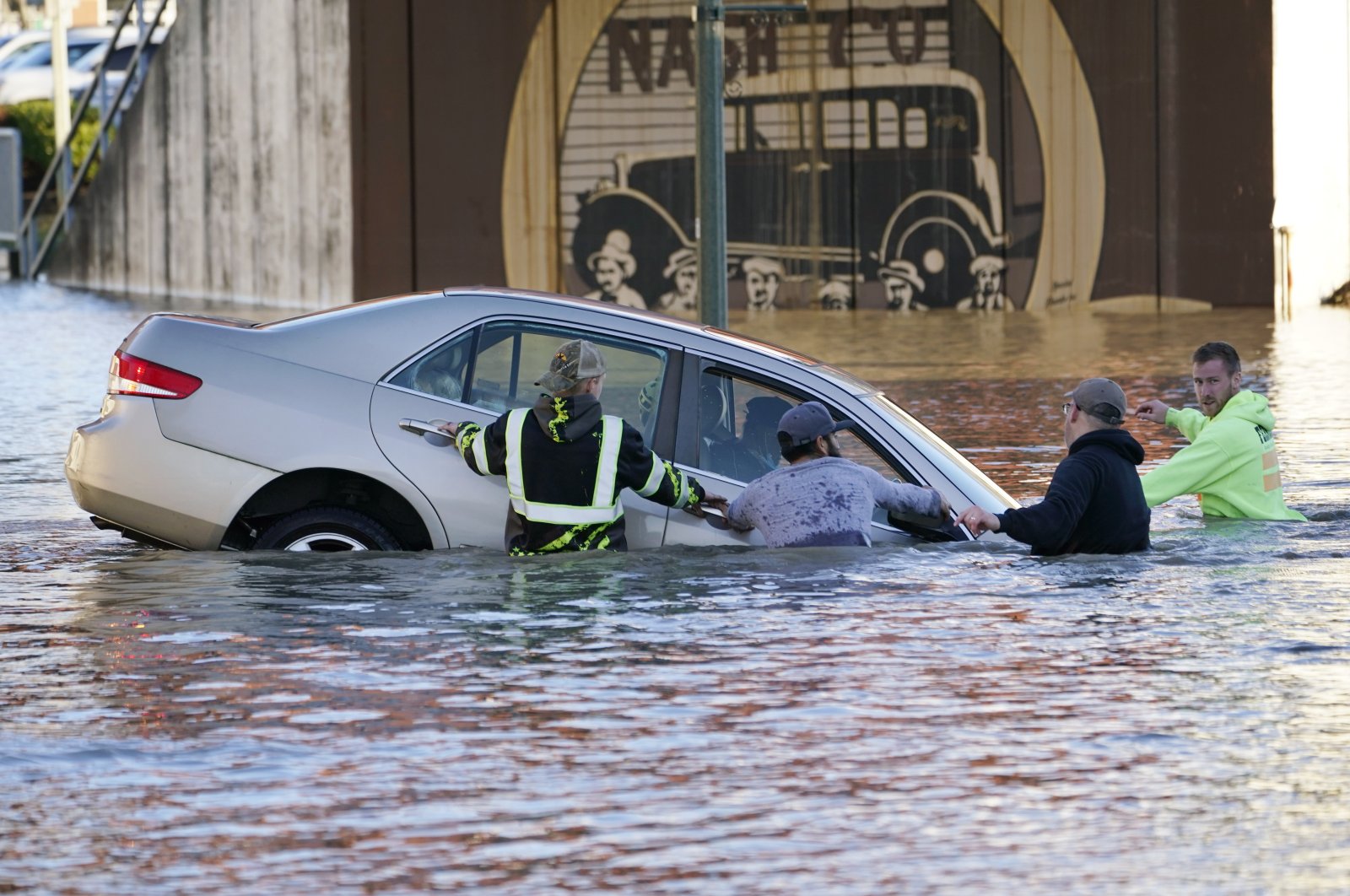 Passersby surround a car whose driver went past a barricade and into the flooded Nooksack River in Ferndale, Washington, U.S., Nov. 16, 2021. (AP Photo)
by ASSOCIATED PRESS Nov 17, 2021 11:46 am
RECOMMENDED

As many parts of western Washington began drying out Tuesday after a storm that dumped rain for days, waters in some areas continued rising and more people were urged to evacuate while crews worked to restore power and reopen roads.

Officials in the small city of Sumas, Washington, near the Canadian border called the flood damage there devastating. Officials said on Facebook on Tuesday that hundreds of people had been evacuated and estimated that 75% of homes had water damage.

The soaking reminded people of western Washington’s record severe flooding in November 1990 when two people died and there were more than 2,000 evacuations, officials said.

"These families and businesses need our prayers and support as we start the process of cleanup and rebuilding over the next few days,” the Facebook post said.

Across the border, the body of a woman was recovered from a landslide northeast of Vancouver, British Columbia, near Lillooet that was triggered by record rainfall. Royal Canadian Mounted Police said at least two other people were reported missing.

Fast-rising water levels from a Sumas River in Washington state overwhelmed rescuers in Abbotsford, British Columbia, on Tuesday, where 1,100 homes were evacuated. Those residents joined thousands of others in the province who were forced from their homes by floods or landslides starting Sunday night.

"It breaks my heart to see what’s going on in our city,” he said.

Southwest of Sumas, Washington, a 59-year-old man from Everson identified by police Tuesday as Jose Garcia remained missing after his truck was swept into a flooded field and he had been clinging to a tree.

Additionally, six railroad cars that had been sitting on tracks in a BNSF rail yard in Sumas derailed in the flooding Tuesday, said Lena Kent, BNSF general director of public affairs. Trains in that location and others in western Washington won’t be running until water recedes and tracks are inspected and repaired if necessary, she said.

Canada’s two largest railways expect it will take several days to clear track outages in southern British Columbia that are hindering the movement of goods to the port in Vancouver.

In the northern Washington city of Ferndale, officials on Tuesday urged people in homes and businesses to evacuate in an area near the rising Nooksack River. Bystanders near the town's main street rescued a man Tuesday who mistakenly drove into floodwaters. The half-dozen people waded into waters up to their chests and pushed the floating car to drier ground.

The rains were caused by an atmospheric river – a huge plume of moisture extending over the Pacific and into Washington and Oregon.

It was the second major widespread flood event in the northwest part of Washington state in less than two years, and climate change is fueling more powerful and frequent severe weather, Whatcom County officials told the Bellingham Herald.

About 5.57 inches of rain fell at Bellingham International Airport from Saturday through Monday, Nov. 15. The normal monthly rain total is 5.2 inches for November, according to National Weather Service data.

At the height of the storm, more than 158,000 electrical customers in western Washington on Monday had no power as wind speeds reached 60 mph (96 kph), including one gust of 58 mph (93 kph) at Seattle-Tacoma International Airport. Schools in and around the city of Bellingham were closed Tuesday for the second day in a row.

West of Seattle on the Olympic Peninsula, the United States Coast Guard helped local authorities evacuate about 10 people Monday near the town of Forks.

The National Weather Service had issued flood warnings for several rivers around western Washington. There was good news in that south of Bellingham, the Skagit River at Mount Vernon crested at a level below that of a flood wall constructed in 2016 to hold back rushing waters, The Seattle Times reported.

Up the Skagit River from Mount Vernon in the town of Hamilton, floodwaters that surrounded homes were slowly receding Tuesday evening, Q13-TV reported. Dozens of people, including Bert Kerns, escaped to higher grounds at the Hamilton First Baptist Church on Sunday. He was among those who hadn't been able to get to his house yet.

"Rough. Kind of like a nightmare,” said Kerns, who has lived in Hamilton since 1980.