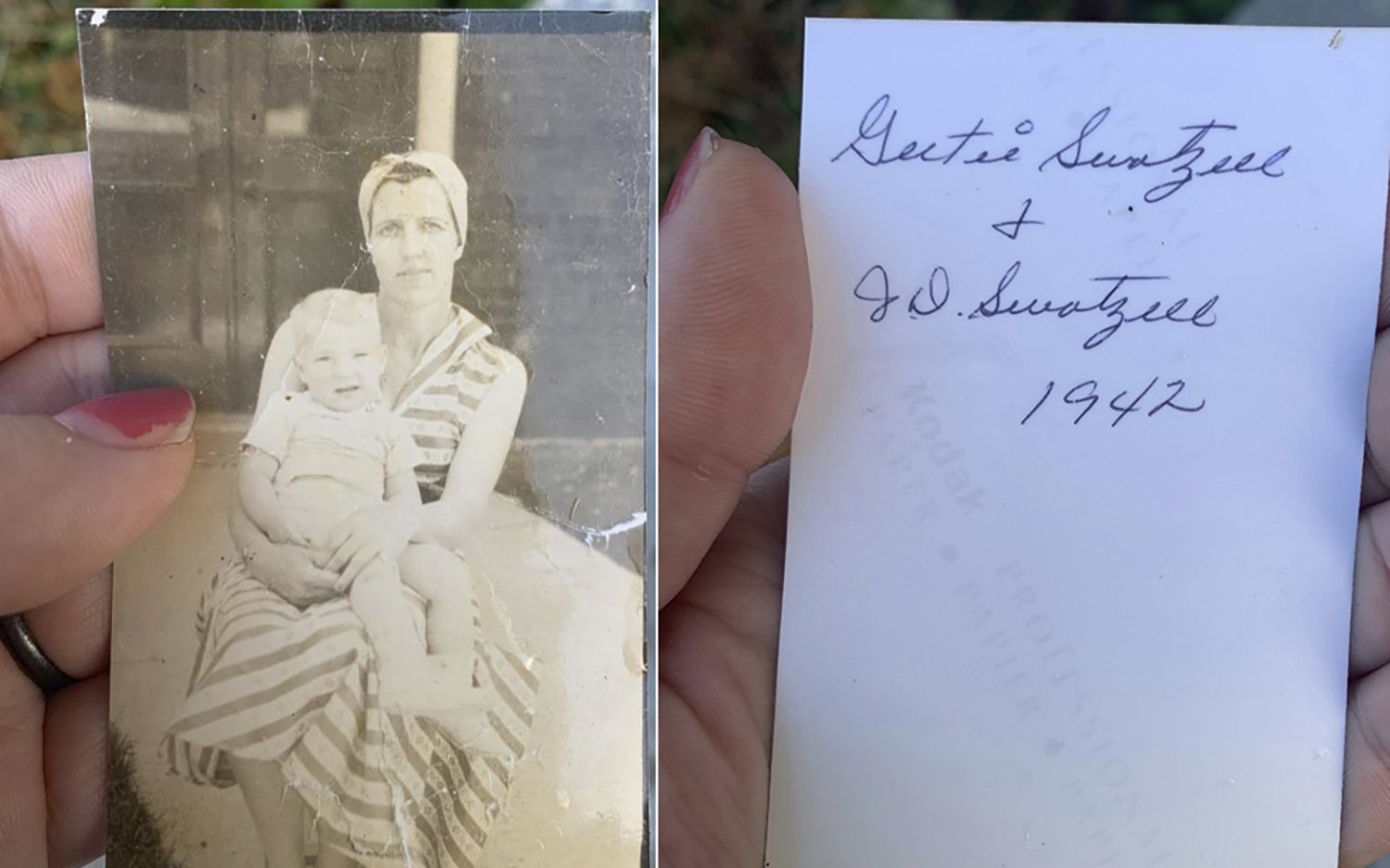 This photo combo shows Katie Posten holding the front and back of a photograph she found stuck to her car's windshield, New Albany, Indiana, U.S., Dec. 11, 2021. (Katie Posten via AP)
by Associated Press Dec 13, 2021 9:16 am
RECOMMENDED

While the tornadoes that hit the United States on Friday evening left at least 80 dead and damaged several homes in Kentucky, an 80-year-old family photo from one of the damaged houses was blown 130 miles (209 kilometers) all the way to New Albany, Indiana.

Katie Posten saw something that looked like a note or receipt stuck to the windshield when she walked outside Saturday morning to her car parked in her driveway.

She grabbed it and saw it was a black and white photo of a woman in a striped sundress and headscarf holding a little boy in her lap. On the back, written in cursive, it said, “Gertie Swatzell & J.D. Swatzell 1942.” A few hours later, Posten would discover that the photo had made quite a journey about 130 miles on the back of monstrous winds.

Posten had been tracking the tornadoes that hit the middle of the U.S. Friday night, killing dozens of people. They came close to where she lives in New Albany, Indiana, across the Ohio River from Louisville, Kentucky. So she figured it must be debris from someone’s damaged home.

“Seeing the date, I realized that was likely from a home hit by a tornado. How else is it going to be there?” Posten said in a phone interview Sunday morning. “It’s not a receipt. It’s well-kept photo.”

So, doing what any 21st century person would do, she posted an image of the photo on Facebook and Twitter and asked for help in finding its owners. She said she was hoping someone on social media would have a connection to the photo or share it with someone who had a connection.

Sure enough, that’s what happened.

“A lot of people shared it on Facebook. Someone came across it who is friends with a man with the same last name, and they tagged him,” said Posten, 30, who works for a tech company.

That man was Cole Swatzell, who commented that the photo belonged to family members in Dawson Springs, Kentucky, almost 130 miles away from New Albany, as the crow flies, and 167 miles away by car. Swatzell on Sunday didn’t respond to a Facebook message seeking comment.

In Dawson Springs, a town of about 2,700 people 60 miles east of Paducah, homes were leveled, trees were splintered and search and rescue teams continued to scour the community for any survivors. Dozens of people across five states were killed.

The fact that the photo traveled almost 130 miles is “unusual but not that unusual,” said John Snow, a meteorology professor at the University of Oklahoma.

In one documented case from the 1920s, paper debris traveled 230 miles from the Missouri Bootheel into southern Illinois. The paper debris rides winds, sometimes reaching heights of 30,000 to 40,000 feet above the ground, he said.

“It gets swirled up,” Snow said. “The storm dissipates and then everything flutters down to the ground.”

Posten wasn’t alone in finding family photos and school pictures that had traveled dozens of miles in the tornadoes’ paths. A Facebook group was set up after the storms so people could post photos and other items like an ultrasound image they had found deposited in their yards.

Posten plans to return the photo to the Swatzell family sometime this week.

“It’s really remarkable, definitely one of those things, given all that has happened, that makes you consider how valuable things are – memories, family heirlooms, and those kinds of things,” Posten said.

“It shows you the power of social media for good. It was encouraging that immediately there were tons of replies from people, looking up ancestry records, and saying ‘I know someone who knows someone and I’d like to help,’” she added.