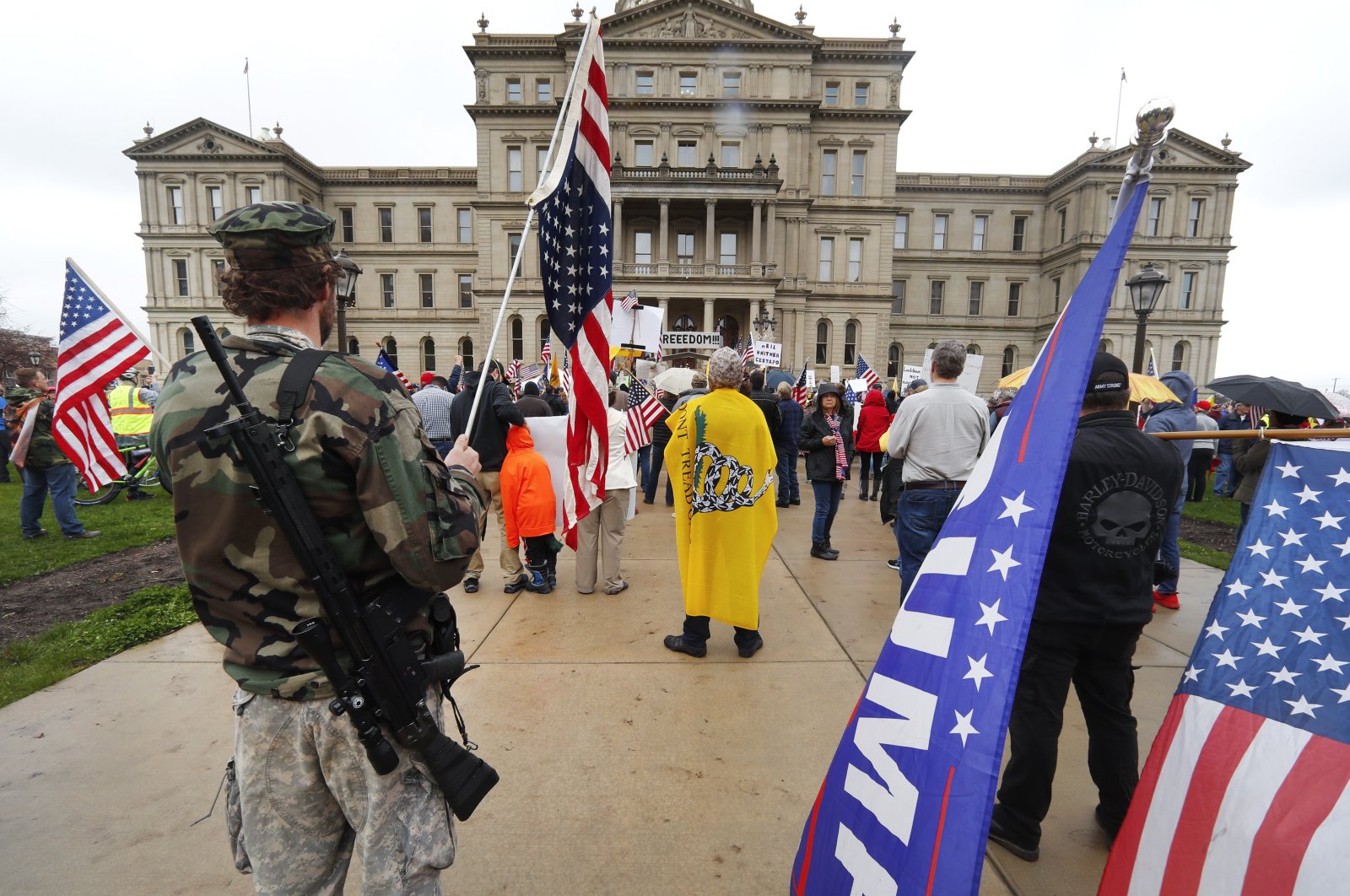 Armed protesters gathered at US state of Michigan's Capitol, seeking to end to governor's emergency measures while ignoring social-distancing rules

As rightwing anti-quarantine rallies continue to spread across the U.S., where large numbers of people are still dying from COVID-19, some militia group members carrying firearms entered the capitol building in the Michigan state Thursday to demand the lifting of lockdown orders.

Many people with pro-Trump signs at "American Patriot Rally" appeared to be ignoring state social-distancing guidelines as they clustered together within 6 feet (1.83 meters) of each other.

The protest appeared to be the largest in the state since April 15, when supporters and allies of President Donald Trump organized thousands of people for "Operation Gridlock," jamming the streets of Lansing with their cars to call out what they said was the overreach of Democrat Gov. Gretchen Whitmer’s strict stay-at-home order.

It was one of the country’s first major anti-lockdown rallies and helped sparked a wave of similar events nationwide. Trump appeared to lend his support to them and scattered protests elsewhere, tweeting "LIBERATE MICHIGAN!"

Republican politicians and individuals affiliated with President Donald Trump’s re-election campaign are organizing or promoting anti-lockdown protests across key electoral battleground states. Anti-lockdown rallies have also been seen in states including Texas, Wisconsin, Ohio, California and Minnesota. Some epidemiologists predict such protests could cause a surge in COVID-19 cases.

Putting a positive face on the latest grim numbers, the U.S. death toll has now surpassed American lives lost in the Vietnam War, Trump said the federal government will not be extending its coronavirus social distancing guidelines, and his son-in-law and adviser, Jared Kushner, predicted that by July the country will be “really rocking again.”

The U.S. death toll from COVID-19 on Wednesday crept past 60,000, a figure that Trump in recent weeks had suggested might be the total death count. He had cited the estimate as a sign of relative success after the White House previously warned the U.S. could suffer 100,000 to 240,000 deaths. Now he is trying to make a virtue of a lower number, arguing that the efforts of his administration have warded off a far greater death toll than otherwise would have been seen.

In the U.S., the increase in far-right violence has been mirrored by an increase in hate crimes. Fueled by President Donald Trump's immigration stance and the perception that he sympathized with those espousing white supremacy, the number of U.S. hate groups surged last year, the Southern Poverty Law Center (SPLC) said in February. Neo-Nazi groups substantially increased in number from 99 to 121, the report said, in part by recruiting college students.

In August 2017, the quiet college town of Charlottesville, Virginia became a bloody symbol of the nation's roiling racial and political divisions following a white nationalist gathering that left one dead. The Charlottesville violence created a fierce urgency to remove public statues, monuments and other remembrances that glorified the leaders of the Confederacy in the U.S. Some believe that the statues mark history and honor heritage, while others say they represent white supremacy and America's dark legacy of slavery.