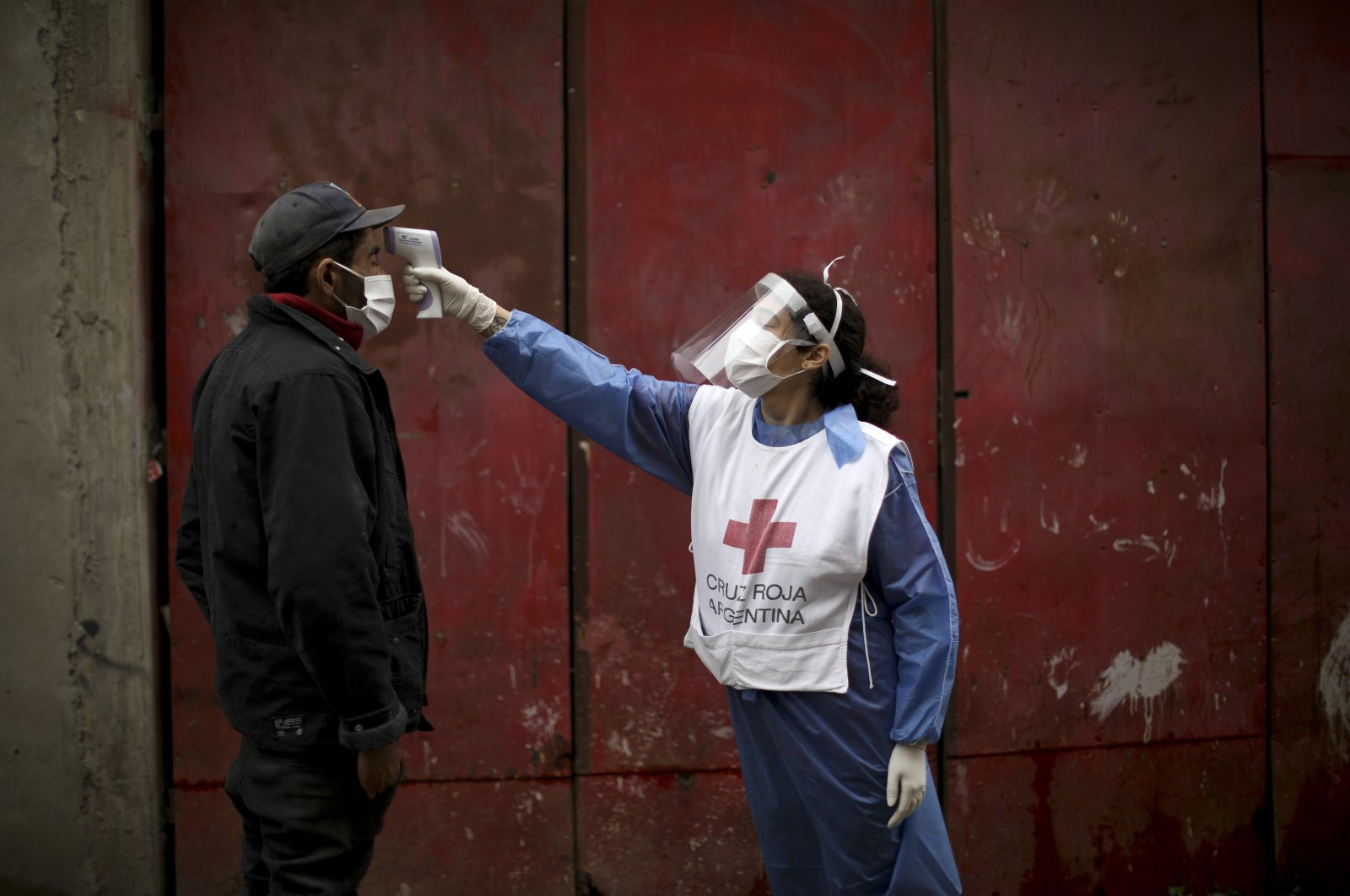 A Red Cross volunteer measures the temperature of a man inside the Fraga slum during a government-ordered lockdown to curb the spread of the new coronavirus, in Buenos Aires, Argentina, June 6, 2020. (AP Photo)
by DAILY SABAH WITH AGENCIES Oct 20, 2020 9:08 am
RECOMMENDED

Latin America is one of the worst-hit regions and home to half the 10 nations reporting the highest number of confirmed cases as the recent explosion in infections has strained hospitals and health care workers.

Argentina has become the fifth country with more than 1 million coronavirus cases, its Health Ministry and a Reuters tally confirmed on Monday, making it the smallest nation by far to reach the grim milestone after infections accelerated in recent weeks. There were 1,002,662 confirmed cases of the virus in the South American country by Monday night. The country follows in the footsteps of the United States, India, Brazil and Russia, all with far larger populations than Argentina's roughly 45 million people.

Three other nations in Latin America are expected to reach 1 million cases in the coming weeks – Colombia, Mexico and Peru. Brazil was the first country in South America to pass the 1 million mark of cases in June. The country's number of infections has since grown to over 5.2 million, behind only the U.S. with 8.2 million and India with 7.6 million cases.

The region’s high caseload is due to a combination of factors including weak public health systems, limited testing and contact tracing, and social issues like poverty. In Argentina, intensive care unit beds in the country more than 64% occupied. In some provinces, health care systems are on the brink of becoming overwhelmed. The South American country is also grappling with low levels of testing. But for those getting tested, more than 60% of recent tests are coming back positive, one of the world's highest positivity rates.

Though some nations have seen important declines, overall there has been little relief, with cases dropping in one municipality only to escalate in another. The trajectory is showing that the pandemic is likely to leave no corner of Latin America unscathed.

The number of confirmed COVID-19 cases across the planet has surpassed 40 million this week, but experts say that is only the tip of the iceberg when it comes to the true impact of the pandemic that has upended life and work around the world. The milestone was hit Monday morning, according to Johns Hopkins University, which collates reports from around the world.

The actual worldwide tally of COVID-19 cases is likely to be far higher, as testing has been uneven or limited, many people have had no symptoms and some governments have concealed the true number of cases. To date, more than 1.1 million confirmed virus deaths have been reported, although experts also believe that number is an undercount.

The U.S., India and Brazil are reporting by far the highest numbers of cases although the global increase in recent weeks has been driven by a surge in Europe, which has seen over 240,000 confirmed virus deaths in the pandemic so far.

The World Health Organization (WHO) said last week that Europe had reported a record weekly high of nearly 700,000 cases and said the region was responsible for about a third of cases globally. Britain, France, Russia and Spain account for about half of all new cases in the region, and countries like Belgium and the Czech Republic are facing more intense outbreaks now than they did in the spring. WHO said the new measures being taken across Europe are “absolutely essential” in stopping COVID-19 from overwhelming its hospitals.

Some researchers have argued that allowing COVID-19 to spread in populations that are not obviously vulnerable will help build up herd immunity and is a more realistic way to stop the pandemic instead of the restrictive lockdowns that have proved economically devastating.

But WHO Director-General Tedros Adhanom Ghebreyesus has warned against the belief that herd immunity might be a viable strategy to pursue, saying this kind of protection needs to be achieved by vaccination, not by deliberately exposing people to a potentially fatal disease.