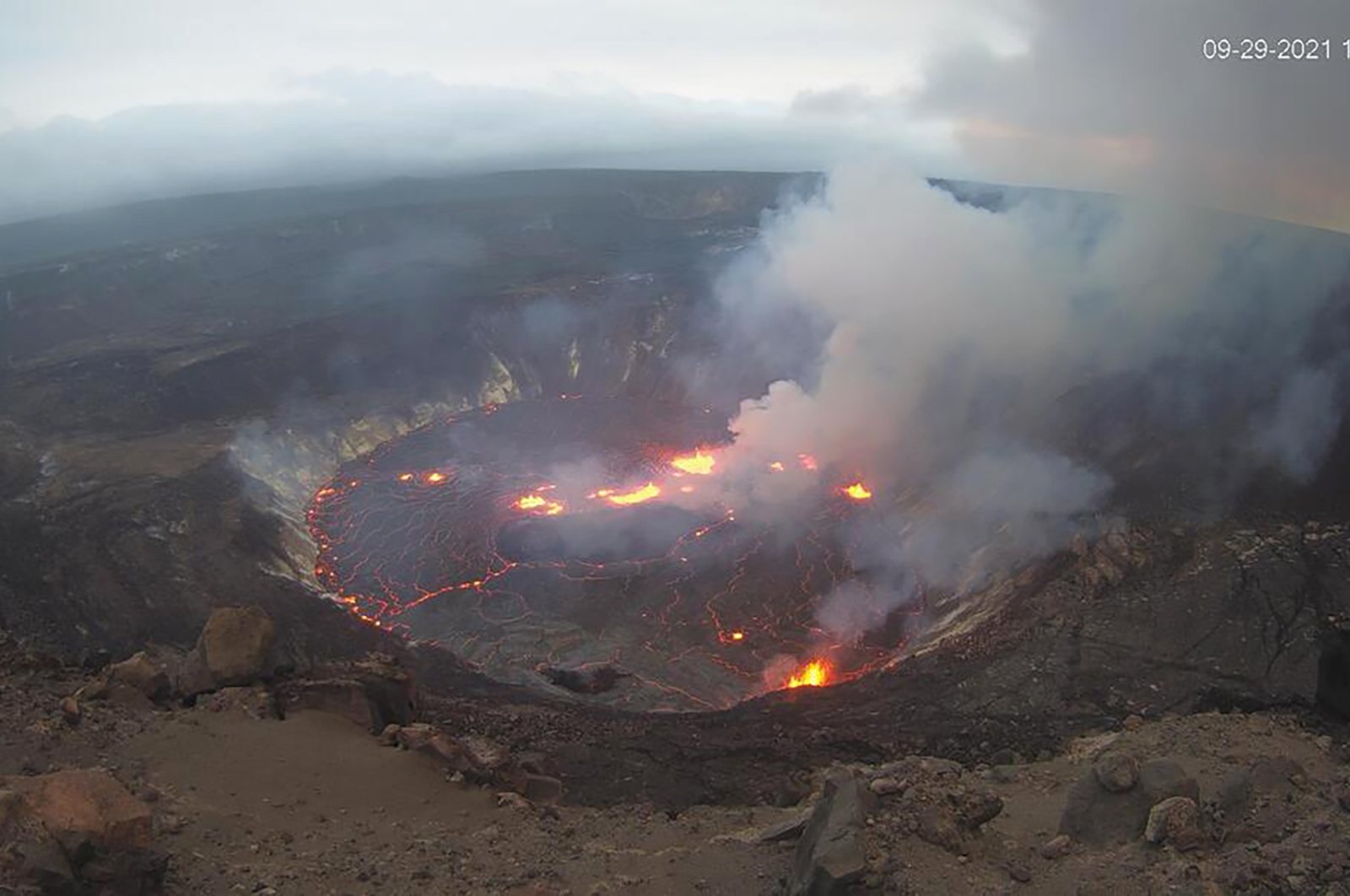 This webcam image provided by the United States Geological Survey shows a view of an eruption that has begun in the Halemaumau crater at the summit of Hawaii’s Kilauea volcano, Sept. 29, 2021. (USGS via AP)
by ASSOCIATED PRESS Sep 30, 2021 8:51 am
RECOMMENDED

Kilauea, one of the world's most active volcanoes, has begun erupting on Hawaii's Big Island.

Officials with the U.S. Geological Survey (USGS) confirmed Wednesday that an eruption has begun in Kilauea volcano's Halemaumau crater at the volcano's summit.

Webcam footage of the crater showed lava fountains covering the floor of the crater and billowing clouds of volcanic gas rising into the air. The same area has been home to a large lava lake at various times throughout the volcano's eruptive past.

The eruption is not in an area with homes and is entirely contained within Hawaii Volcanoes National Park.

"All signs indicate that it will stay within the crater," said Ken Hon, the USGS scientist in charge of Hawaii Volcano Observatory. "We’re not seeing any indications that lava is moving into the lower part of the east rift zone where people live. Currently all the activity is within the park.”

The volcano's alert level has been raised to "warning” and the aviation code changed to red.

Earlier Wednesday, officials said increased earthquake activity and ground swelling had been detected, and at that time raised the alert levels accordingly.

Kilauea had a major eruption in 2018 that destroyed more than 700 homes and displaced thousands of residents. Before that eruption, the volcano had been slowly erupting for decades, but mostly not in densely populated residential areas.

Before the major 2018 eruption, Kilauea had been erupting since 1983 and streams of lava occasionally covered rural farms and homes. During that time, the lava sometimes reached the ocean, causing dramatic interactions with the water.

Over four months in 2018, Kilauea spewed enough lava to fill 320,000 Olympic-sized swimming pools, burying an area more than half the size of Manhattan in up to 80 feet (24 meters) of now-hardened lava. The molten rock reduced landmarks, streets and neighborhoods to a vast field of blackened boulders and volcanic shard.

After the 2018 eruption the summit lava lake stopped erupting and for the first time in recorded history began to fill with water, raising concerns about the possibility of an explosive interaction between lava and groundwater.

The same area of the volcano that began erupting Wednesday also erupted in December and lasted until May.

Hon said these types of eruptions could be happening for years as the volcano fills up.

“We do know that one thing that happens is that the magma keeps coming in to Kilauea at a pretty constant rate and so it’s either filling the inside of the volcano and repressurize it or it’s coming out to the surface.”

Hawaii Volcanoes National Park spokesperson Jessica Ferracane told The Associated Press (AP) that she had not yet arrived at the park, but that colleagues reported seeing some lava spatter and glow within the summit crater.

“He saw that from Volcano House, which is at least 2 miles away from the eruption site, so I suspect ... we'll be able to see a pretty glow, and who knows what else,” she said.

The Volcano House is a hotel and restaurant within the national park adjacent to the visitor center. The park is open to visitors.

Ferracane said the area that is erupting is not close to where people can hike or drive. Trails downwind from the eruption have been closed for years.

"The park is open and there are no road closures at this time," Ferracane said.

Ferracane added that officials are expecting tens of thousands of visitors to flock into the park and that people need to be very careful both in terms of natural hazards and COVID-19.

“This eruption is going to draw many people to the park, we're already seeing people come into the park, drive in after dark tonight,” Ferracane said. “Really need people to remember that we are in the middle of a pandemic and they need to stay safe and to keep us safe, too.”

She said people must maintain 6 feet of distance and wear masks.

“If you're sick, please don't come. Come visit another day. Enjoy the views from the webcam,” she said. “We really want to not have these current eruption conditions increase the spread of COVID.”