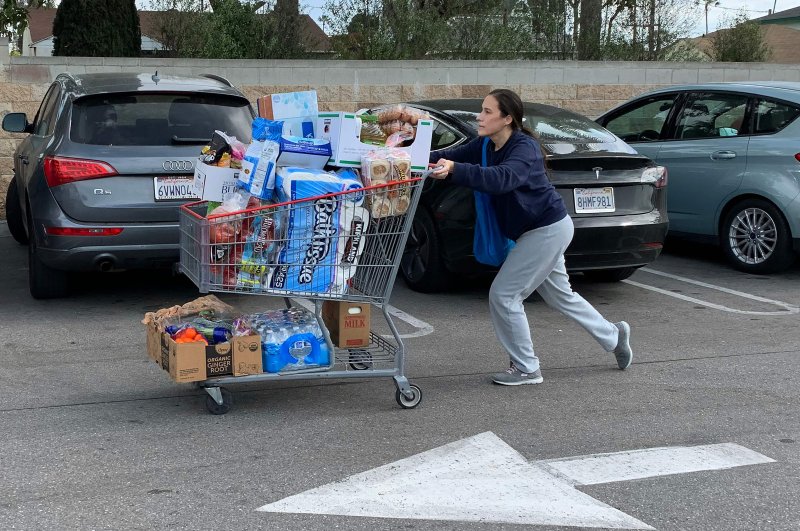 People buy water, food and toilet paper at a store, as they begin to stockpile essentials from fear that supplies will be affected by the spread of the coronavirus outbreak across the country, in Los Angeles, Feb. 29, 2020. (AFP Photo)
by REUTERS Mar 04, 2020 9:59 pm
RECOMMENDED

Officials in Los Angeles declared a local emergency and a public health emergency in response to the coronavirus threat on Wednesday, as the number of cases increased across the United States.

They also announced six new confirmed travel-related cases in Los Angeles County, including three people who had been to northern Italy, one of the places hardest hit in the global outbreak of a virus that causes a respiratory disease called COVID-19. Of the six, only one has been hospitalized. The other five are recovering in home isolation.

In Washington, U.S. lawmakers reached bipartisan agreement on an $8.3 billion emergency bill to help fund efforts to contain the virus in the United States, a congressional aide said. The bill would be introduced in the U.S. House of Representatives later on Wednesday.

Once the full House approves the bill, the Senate is expected to act quickly so that President Donald Trump can sign the measure into law, putting funds into the pipeline to fight the virus.

In New York, three family members and a neighbor of a man infected with the new coronavirus have also tested positive, officials said.

New York's Yeshiva University said one of its students had tested positive for COVID-19, and it was canceling all classes on Wednesday at one of its four New York City campuses as a "precautionary step."

On Tuesday, officials said a man in his 50s who lives in a New York City suburb and works at a Manhattan law firm tested positive for the virus, the second identified case in the state.

The four new cases include three family members of the man, who is hospitalized, New York Mayor Bill De Blasio said in a statement. Health authorities said one of his children was a student at Yeshiva. The fourth was a neighbor of the infected family, bringing the total of confirmed cases in New York state to six.

The hospitalized patient had not traveled to countries hardest hit in the coronavirus outbreak, which began in China in December and is now present in nearly 80 countries and territories, killing more than 3,000 people. The first New York case, reported last week, was in a woman who had returned from Iran, where at least 77 people have died.

Cuomo said about 300 students from New York's college systems, SUNY and CUNY, were being recalled from five countries - China, Italy, Japan, Iran and South Korea - and would be flown on a chartered plane and then be quarantined for 14 days.

The latest data from the U.S. Centers for Disease Control and Prevention (CDC) listed 129 confirmed and presumed cases in the United States, up from the previous 108.

They were 80 reported by public health authorities in 13 states plus 49 among people repatriated from abroad, according to the CDC website.

North Carolina became the 13th state to report a case on Tuesday. The person had visited a nursing home in the Seattle area of Washington state, where nine out of 27 cases reported as of Tuesday were connected to the long-term facility for the elderly. Nine people have died in the Pacific Northwest state.

The Seattle area has the largest concentration of coronavirus cases detected to date in the United States.

"The people who we are most concerned about, who are most vulnerable are senior citizens, people with immune comprised situations," Cuomo said. "That's what we've seen in other places and that's where the situation is most problematic."

At least one school in the Bronx neighborhood of New York City closed on Tuesday. A synagogue in New Rochelle, New York, where the affected family lives and worships, has halted all services for the foreseeable future.