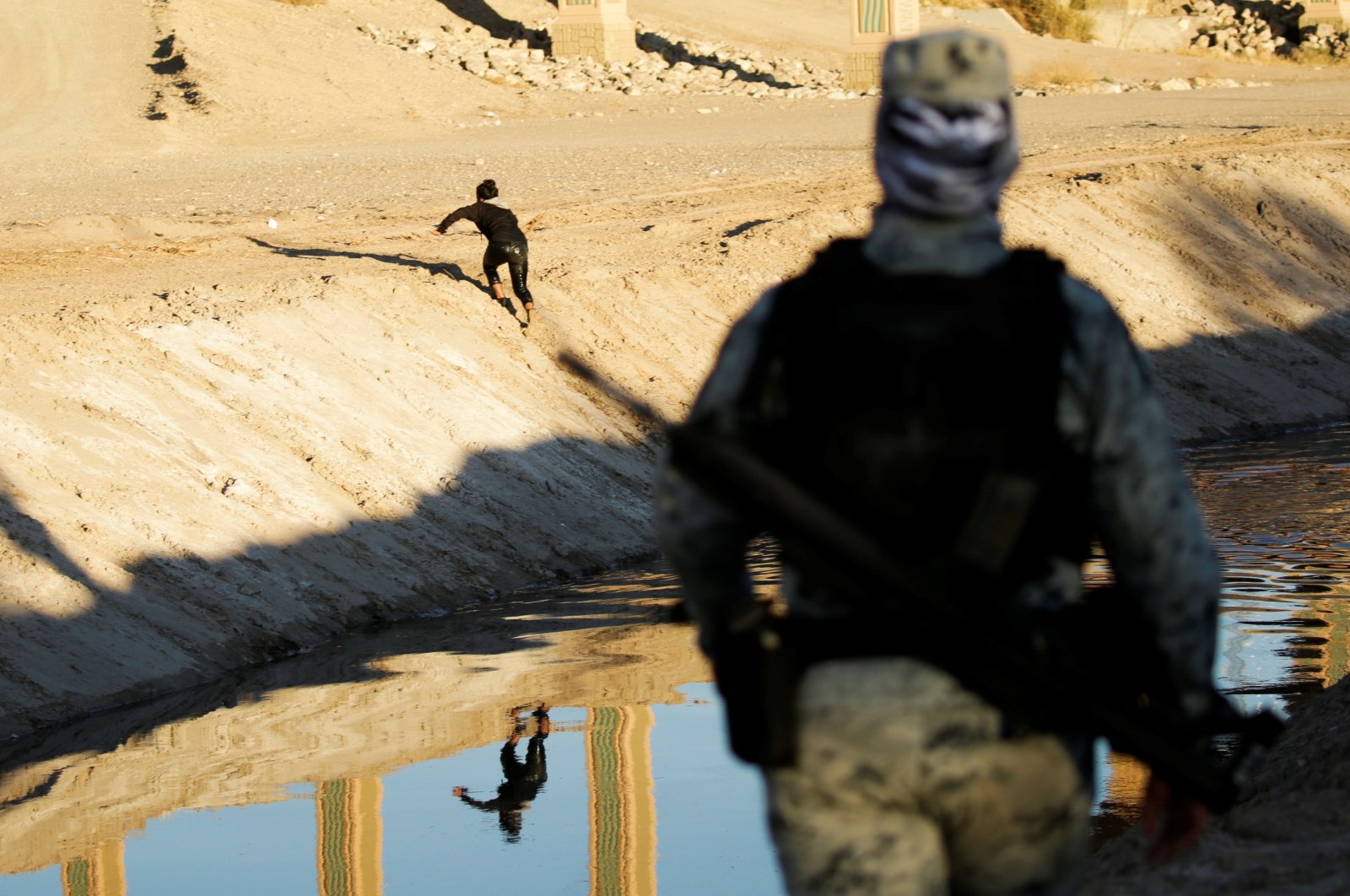 A member of the Mexican National Guard observes migrants after they crossed into El Paso, Texas, U.S., to turn themselves in to request asylum, as seen from Ciudad Juarez, Mexico, Feb. 11, 2021. (Reuters Photo)
by REUTERS Feb 12, 2021 10:26 am
RECOMMENDED

The massacre of a group of migrants whose charred bodies were found in northern Mexico has shone a spotlight on the entrenched links between police and criminals in the violence-ridden country.

A dozen elite police officers have been arrested for their alleged involvement in the killing of 19 people, including at least 14 Guatemalans, near the U.S border last month. They are suspected of being connected to gangs battling for control of lucrative people-smuggling routes to the United States.

"This case is extreme and unacceptable: people who were in the police but who were really criminals," said Maria Elena Morera, president of Common Cause, a nongovernmental organization (NGO) that advocates security reforms.

The victims' bodies were found in a bullet-riddled, burnt-out pickup truck on a rural road in Tamaulipas, one of the states hit hardest by a spiral of drug-fueled bloodshed. Although the massacre is still under investigation, Morera said that police-linked graft is widespread in Mexico due to inadequate training, poor working conditions and threats from criminals.

"This makes the police officers corrupt," she added.

According to a 2019 study by Common Cause, Mexican police officers earn an average of $587 per month. While that is much better than the minimum wage of a little more than $200, it can be perilous work.

Last year, 524 police officers were killed, according to the NGO. One of the most shocking cases of alleged police corruption in Mexico was the disappearance of 43 students who had commandeered buses to travel to a demonstration in 2014.

According to investigators, they were stopped by corrupt police in the state of Guerrero and handed over to a drug cartel, never to be seen again. The following year federal police killed 42 suspected members of the Jalisco New Generation drug cartel in the town of Tanhuato in Michoacan state.

The National Human Rights Commission alleged that 22 of them were summarily executed.

In September 2019, police in Tamaulipas were accused of killing eight people and staging a cover-up.

Mexican authorities "have resigned themselves to not controlling the police," said Gustavo Fondevila, an expert in criminology at the Center for Economic Research and Teaching think-tank.

For years, the "tacit agreement" has been to grant the police resources and autonomy, but in Mexico that "turns into impunity very easily," he warned. In an effort to solve the problem, governments have repeatedly created new police forces, but with little success. Since 2006, the military has also been given a greater role in fighting organized crime, which has only led to more violence with 300,000 dead and 80,000 missing since then.

In 2019, President Andres Manuel Lopez Obrador, an avowed anti-corruption crusader, created the militarized National Guard, which he says is already winning "the respect of the people."

Indeed, public confidence in the National Guard stands at around 83%, compared with nearly 58% for state police, the statistical institute INEGI reported in December.

But the rapid training of the new security force and failure to tackle the underlying problems mean that in the long term the National Guard "will bring exactly the same problems as the police," warned Fondevila.