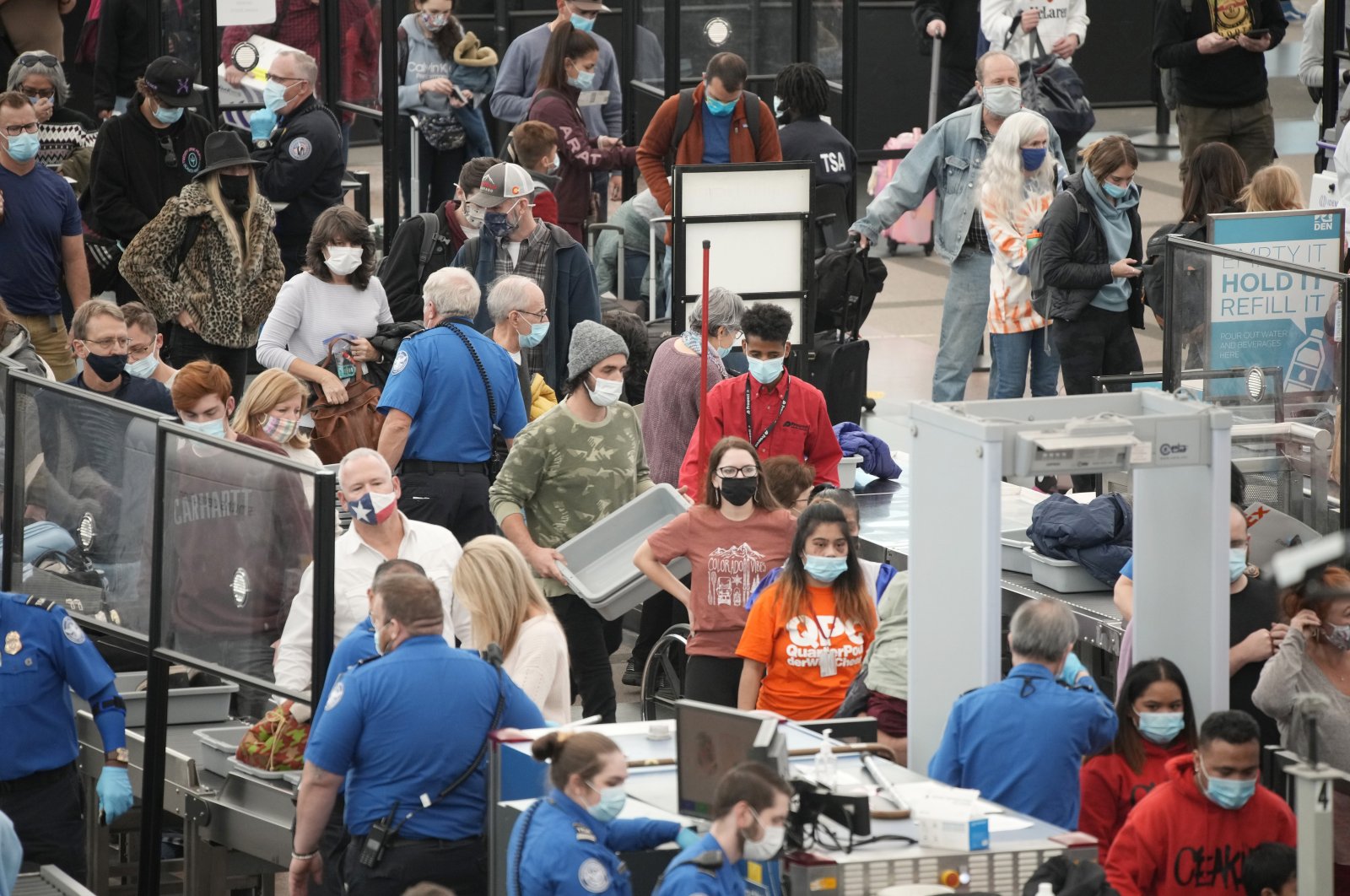 Travelers queue up at the south security checkpoint as traffic increases with the approach of the Thanksgiving Day holiday, Nov. 23, 2021, at Denver International Airport in Denver. (AP Photo)
by ASSOCIATED PRESS Nov 24, 2021 10:40 am
RECOMMENDED

The U.S. is facing its second Thanksgiving of the pandemic in better shape than the first time around, thanks to the vaccine, though some regions are seeing surges of COVID-19 cases that could get worse as families travel the country for gatherings that were impossible a year ago.

The number of air travelers this week is expected to approach or even exceed pre-pandemic levels, and auto club AAA predicts that 48.3 million people will travel at least 50 miles from home over the holiday period, an increase of nearly 4 million over last year despite sharply higher gasoline prices.

Nearly 200 million Americans are fully vaccinated. That leaves tens of millions who have yet to get a shot in the arm, some of them out of defiance. Hospitals in the cold Upper Midwest, especially Michigan and Minnesota, are filled with COVID-19 patients who are mostly unvaccinated.

Michigan hospitals reported about 3,800 coronavirus patients at the start of the week, with 20% in intensive care units, numbers that approach the bleakest days of the pandemic’s 2020 start. The state had a seven-day new-case rate of 572 per 100,000 people Tuesday, the highest in the nation, followed by New Hampshire at 522.

In the West, New Mexico, Arizona, Colorado, Utah and Montana also ranked high. Some Colorado communities, including Denver, are turning to indoor mask orders to reduce risk, a policy that has also been adopted in the Buffalo, New York, area and Santa Cruz County, California.

The seven-day daily average of new reported cases up nearly 30% in the last two weeks through Tuesday, according to figures from Johns Hopkins University. The U.S. Centers for Disease Control and Prevention (CDC) says unvaccinated people should not travel, although it is unclear whether that recommendation is having any effect.

The statistics in Michigan are “horrible,” said Dr. Matthew Trunsky, a respiratory specialist at Beaumont Health in suburban Detroit.

During a recent office visit, he encouraged a patient who uses oxygen to get vaccinated. The patient declined and now is in the hospital with COVID-19, desperately relying on even more oxygen, Trunsky said.

He said he continues to encounter patients and their family members espousing conspiracy theories about the vaccine.

“We’ve had several people in their 40s die in the last month – 100% unvaccinated,” Trunsky said. “It’s just so incredibly sad to see a woman die with teenagers. Especially with that age group, it’s nearly 100% preventable.”

In Detroit, where less than 40% of eligible residents were fully vaccinated, Mayor Mike Duggan said hospitalizations have doubled since early November.

“We have far too many people in this country that we have lost because they believed some nonsense on the internet and decided not to get the vaccine,” said Duggan, a former hospital executive.

Despite hot spots, the outlook in the U.S. overall is significantly better than it was at Thanksgiving 2020.

Airports have been jammed. More than 2.2 million people passed through security checkpoints on Friday, the busiest day since the pandemic shut down travel early in 2020. On some recent days, the number was twice as high as Thanksgiving a year ago.

Sarene Brown and three children, all vaccinated, were flying to Atlanta from Newark, New Jersey, to see family. People close to them have died from COVID-19.

“I’m thankful that I’m here, and I’m not in heaven, and I’m thankful for my family and that God helped me survive,” said Neive Brown, 7, who got her first dose.

“We would encourage people who gather to do so safely after they’ve been fully vaccinated, as we’ve been saying for months now,” said Dr. Rochelle Walensky, director of the CDC. “I do think that this is very different because we actually have the tools to prevent the vast majority of cases.”

Dr. Eric Topol, head of the Scripps Research Translational Institute, said his optimism is tempered by the delta variant’s ability to jump from person to person, especially among the millions who are unvaccinated or are due for a booster.

Denver’s public hospital, Denver Health, is sending people elsewhere because of a lack of beds. Staff members were exhausted from treating COVID-19 patients and others who had postponed other medical needs, chief executive Robin Wittenstein said.

“Our system is on the brink of collapse,” she said.

Arizona reported at least 2,551 COVID-19 patients in hospitals, far below the peak of last winter but still reason for concern. Officials said beds were limited.