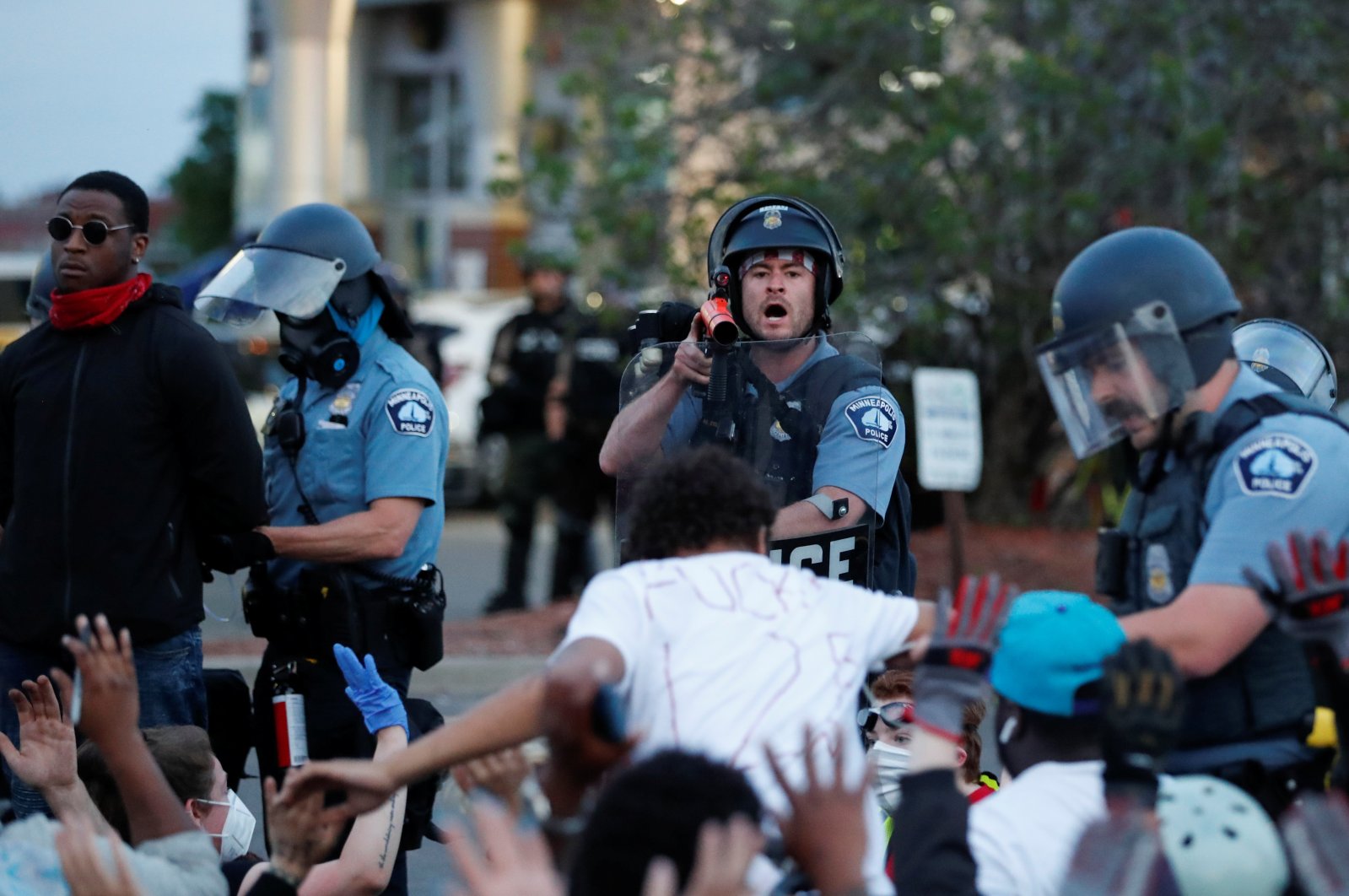 A police officer aims his weapon as a protester is detained during a rally against the death in Minneapolis police custody of George Floyd, in Minneapolis, Minnesota, U.S., May 31, 2020. (Reuters Photo)
by ASSOCIATED PRESS Jun 02, 2020 10:30 pm
RECOMMENDED

The U.S. state of Minnesota filed a human rights complaint Tuesday against the Minneapolis Police Department in the death of George Floyd by an officer who pressed his knee into Floyd’s neck for minutes, even after he stopped moving.

Gov. Tim Walz and the Minnesota Department of Human Rights announced the filing at a news conference Tuesday afternoon.

The widely seen bystander video showing Floyd’s death has sparked protests around the world. The officer, Derek Chauvin, has been fired and charged with third-degree murder and second-degree manslaughter. Three other officers involved were fired but have not been charged.

“We know that deeply seated issues exist," the governor said. "I know it because we saw the casual nature of the erasing of George Floyd’s life and humanity. We also saw the reaction of the community. They expected nothing to happen, because nothing happened so many times before.”

Walz said the investigation into the police department's policies, procedures and practices over the past 10 years will determine if the force has engaged in systemic discrimination toward people of color and work out how to stop it. State Human Rights Commissioner Rebecca Lucero will lead the investigation.

The FBI is also investigating whether police willfully deprived Floyd of his civil rights.

Spokesmen for the police department and the mayor’s office didn’t immediately respond to messages seeking comment. The Minneapolis City Council planned to issue a statement on the investigation later Tuesday.

The department enforces the state’s human rights act, particularly as it applies to discrimination in employment, housing, education, public accommodations and public services. Mediation is one of its first-choice tools, but the cases it files can lead to fuller investigations and sometimes end up in litigation.

The Minneapolis Police Department has faced decades of allegations of brutality and other discrimination against African Americans and other minorities, even within the department itself. Critics say its culture resists change, despite the elevation of Medaria Arradondo as its first black police chief in 2017.

Arradondo himself was among five black officers who sued the police department in 2007 over alleged discrimination in promotions, pay and discipline. They said in their lawsuit that the department had a history of tolerating racism and discrimination. The city eventually settled the lawsuit for $740,000.

Earlier Tuesday, an attorney for Floyd's family again decried the official autopsy that found his death was caused by cardiac arrest as police restrained him and compressed his neck. The medical examiner also listed fentanyl intoxication and recent methamphetamine use, but not as the cause of death.

A separate autopsy commissioned for Floyd’s family concluded that he died of asphyxiation due to neck and back compression.

“The cause of death was that he was starving for air. It was lack of oxygen. And so everything else is a red herring to try to throw us off,” family attorney Ben Crump said Tuesday. He said the Hennepin County medical examiner went to great lengths to try to convince the public that what was shown on bystander video didn’t cause Floyd to die.

Minnesota Attorney General Keith Ellison told ABC's “Good Morning America” that prosecutors are working as fast as they can to determine whether more charges will be filed.