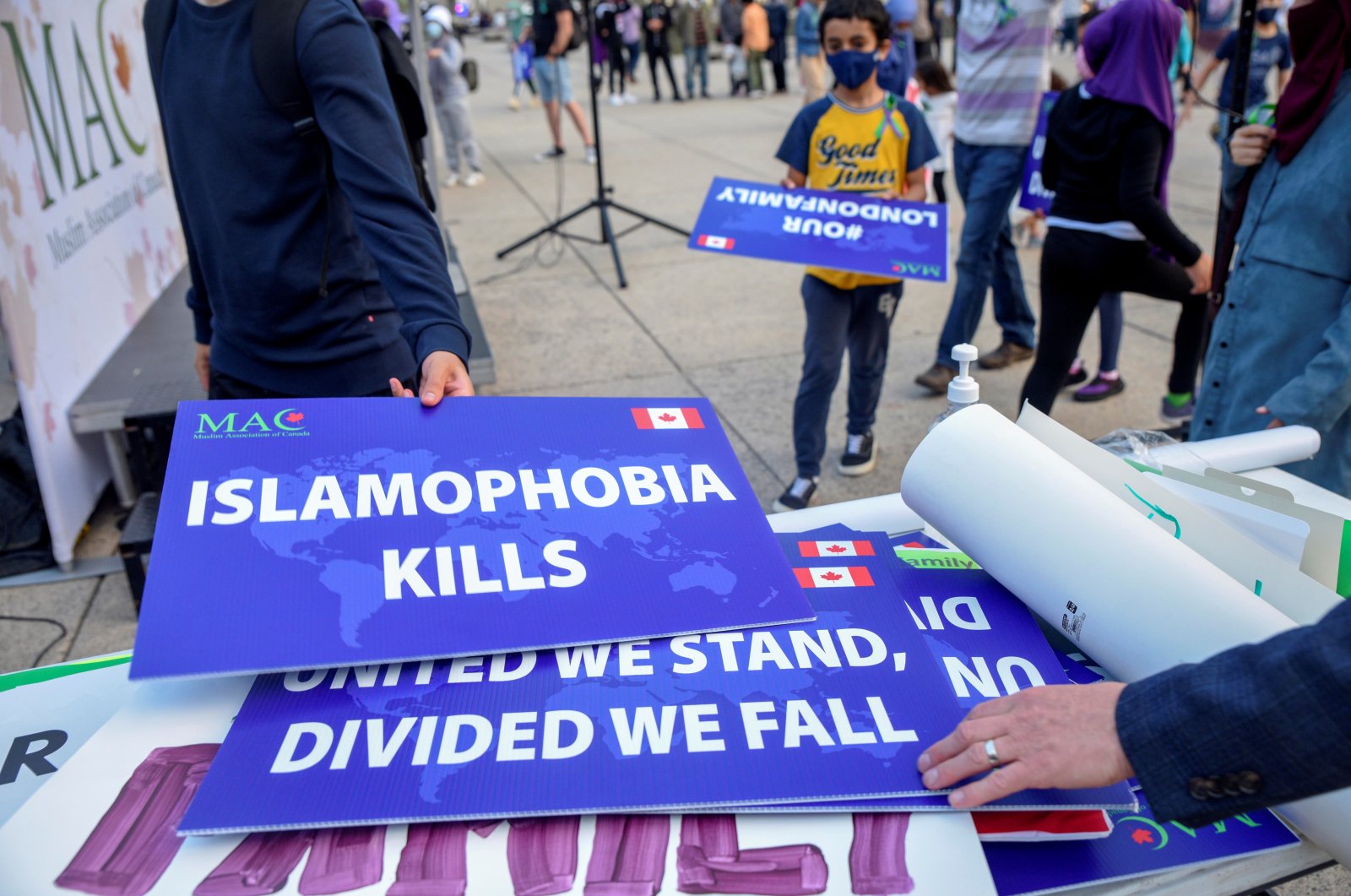 Attendees return signs after a rally to highlight Islamophobia, sponsored by the Muslim Association of Canada including the June 6 London, Ontario attack which killed a Muslim family in what police describe as a hate-motivated crime, in Toronto, Ontario, Canada, June 18, 2021. (Reuters Photo)
by Anadolu Agency Jun 24, 2021 9:22 pm
RECOMMENDED

Canadian Muslim charities have sent a letter to Prime Minister Justin Trudeau to probe what the charities call unfair tax audits that end up removing their charitable tax status, according to Canadian media reports.

When the organizations lose their charitable status, donors can no longer claim the funds as a tax deduction, causing a drop in contributions.

The letter sent Wednesday is signed by 129 groups, including the National Council of Canadian Muslims, the Edmonton Islamic Centre, the London Muslim Mosque and civil liberty organizations, according to the Globe and Mail newspaper.

Anadolu Agency (AA) reported earlier this month that Muslim charities have been singled out for scrutiny by the CRA and charities planned to ask Trudeau to conduct an investigation.

The letter Wednesday confirmed that Trudeau and some of his Cabinet ministers have been notified of the request.

"The report shows that the Review and Analysis Division (RAD), a little-known division of the CRA is targeting Muslim charities for audits, based on a prejudiced and unsupported allegation of a risk of terrorist financing," according to the report obtained by AA. "Between 2008 and 2015, 75% of all charities revoked by (the CRA) following these secretive audits were Muslim charities, harming the sector and impacting the larger Muslim community in Canada."

In May 2020, the Ottawa Islamic Centre had its charitable status revoked by the CRA because it said mosque speakers had pursued "activities that promote hate and intolerance."

Yet no Muslim charities have been charged with terror financing, the report states.

"Targeting Muslim charities on the basis of terrorist financing suspicions simply because of the religion they uphold is Islamophobic and prejudiced," said the letter.

The report called for a moratorium on the audit of Muslim charities until an investigation is conducted.

The CRA has denied the charge. When contacted about the letter, the Prime Minister's Office directed inquiries to Tax Revenue Minister Diane Lebouthillier.

A spokesperson for Lebouthillier's office said the tax department and the PMO does not "instruct the CRA to begin audits nor do they intervene in audits underway."

Recently, a man was accused of killing four members of a Canadian Muslim family, in a hate-fueled Islamophobic attack, by running them over with his pickup truck.

Police in London, Ontario, citing witnesses, said 20-year-old Nathaniel Veltman, jumped the curb in his vehicle, struck five members of the family, ranging in age from 9 to 74, and then drove off at high speed.

Veltman, a resident of London who was arrested after the incident, has been charged with four counts of first-degree murder and one count of attempted murder.