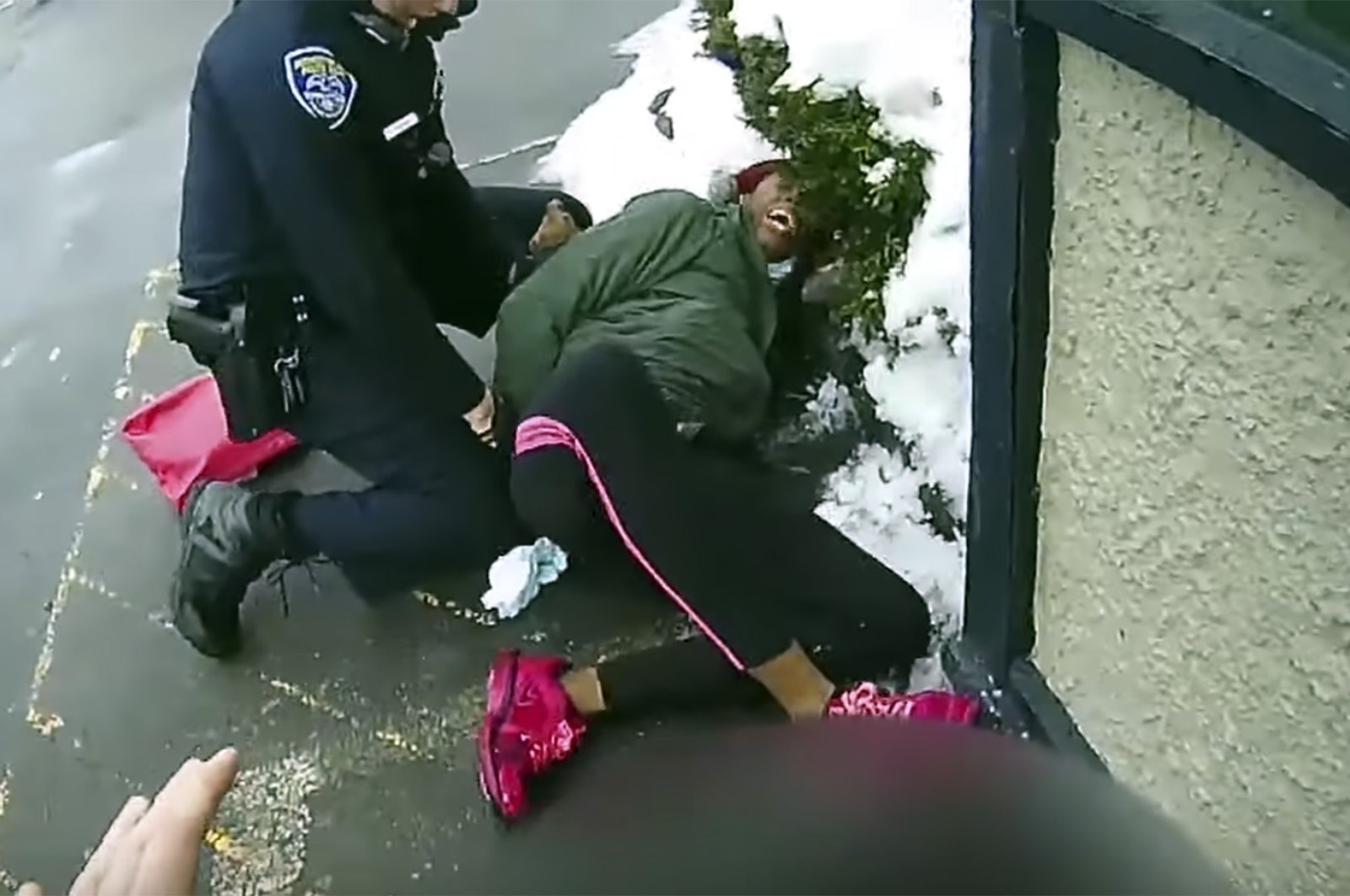 This image taken body camera video released by the Rochester, N.Y., Police Department on Friday, March 5, 2021, shows an officer struggling to subdue a woman suspected of shoplifting who tried to escape with her 3-year-old child in her arms on Feb. 22, 2021. (Rochester Police Department via AP)
by French Press Agency - AFP Mar 06, 2021 11:35 pm
RECOMMENDED

Police in the New York city of Rochester are again under scrutiny after a body-cam video shows them forcing a woman, holding her three-year-old daughter, to the ground and pepper-spraying her.

Rochester police had come under fire in recent months over two earlier episodes that raised questions about their use of force.

Police video of the latest incident, which took place Feb. 22 and was released Friday, shows an officer stopping a woman on the snow-covered shoulder of a road, telling her a nearby business had accused her of stealing.

The woman, carrying her tiny daughter in one arm, insists that she stole nothing and partially empties her purse to show the officer.

But when the officer refuses to let her leave, the woman suddenly turns and runs, her child still in her arms. Several officers give chase, catch up with her and force her to the ground.

When the woman struggles back to her feet and grabs for her screaming daughter, police use pepper spray to subdue her and force her back to the ground.

"Stop. Oh my God, what is wrong with her?" one officer is heard saying of the mother.

The child was not pepper-sprayed directly, according to the Democrat & Chronicle newspaper, but officials who saw the footage said she could have been exposed.

The city's Police Accountability Board, made up entirely of civilians, said it was "disturbed" by the video, which it released.

Board chair Shani Wilson told reporters that there were "troubling parallels" to an incident in late January in which a nine-year-old girl was handcuffed and pepper-sprayed.

"Both involved Black people obviously in crisis, both involved officers using pepper spray on or around a Black child," Wilson said Friday.

She said the Rochester Police Department "needs to fundamentally change its organizational culture."

And City Council President Loretta Scott said that "the amount of force used, coupled with the emotional damage suffered by this child, was disproportionate to the alleged crime," according to the Democrat & Chronicle.

The woman was ultimately charged with trespassing and the arresting officer was placed on administrative leave pending an internal investigation, the newspaper said.

In September, Rochester police came under attack after video showed the arrest of Daniel Prude, a 41-year-old Black man.

Prude was walking naked, high on drugs, when police put a hood over his head to prevent him spitting, then held him face-down on the pavement until he stopped breathing. He died a week later.

A medical examiner ruled Prude's death a homicide, but a grand jury declined to indict any of the officers involved.

The incident recalled the death in May of

, the Black man who died after a Minneapolis police officer kneeled on his neck for several minutes.

Floyd's death, and other police-involved deaths of Black people, sparked protests across the US and around the world.