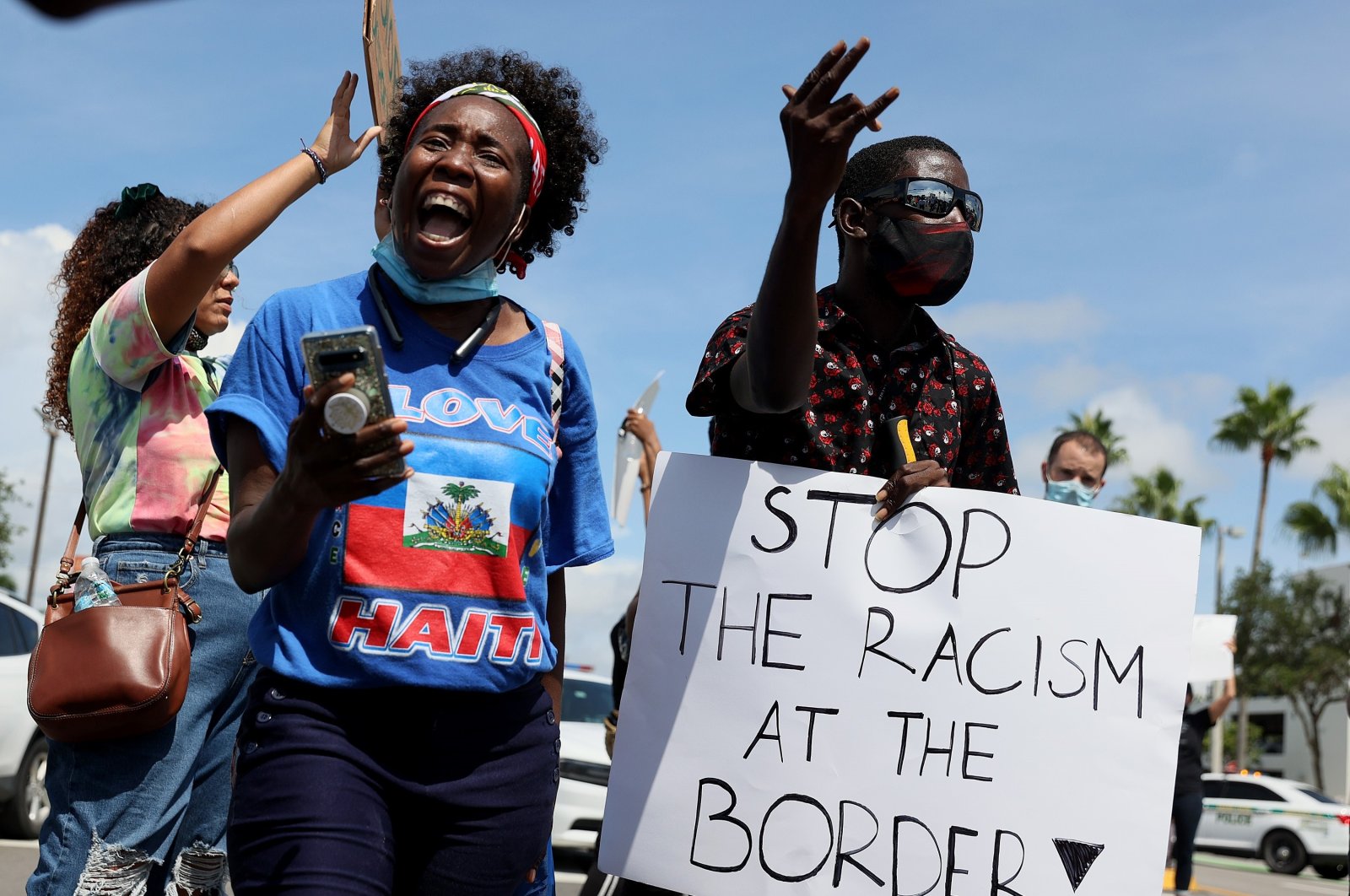 Protesters join together in front of a USCIS building to denounce the expulsion of Haitian refugees from Del Rio, Texas, in Miami, Florida, U.S., Sept. 22, 2021. (AFP Photo)
by Agencies Sep 23, 2021 3:54 pm
RECOMMENDED

The U.S. special envoy to Haiti resigned Thursday two months after his appointment, denouncing the Biden administration's mass deportations of Haitian migrants, who fled recent political turmoil and natural disasters at home, back to their home country.

"I will not be associated with the United States inhumane, counterproductive decision to deport thousands of Haitian refugees and illegal immigrants to Haiti, a country where American officials are confined to secure compounds because of the danger posed by armed gangs in control of daily life," State Department special envoy Daniel Foote said in a scathing letter of resignation.

In the letter to U.S. Secretary of State Antony Blinken, Foote described Haiti as a place where American diplomats "are confined to secure compounds because of the danger posed by armed gangs in control of daily life." The Haitian state has collapsed and is not providing security or even basic services, he wrote.

"More refugees will fuel further desperation and crime," he wrote, according to Agence France-Presse (AFP). "Surging migration to our borders will only grow as we add to Haiti's unacceptable misery."

Haitians need the opportunity "to chart their own course, without international puppeteering and favored candidates but with genuine support for that course." A State Department official, speaking on condition of anonymity, said Foote was thanked for his service, but said the ambassador had overstepped his remit. "He's consistently sought a greater oversight, greater responsibility in a way that we did not think was appropriate or prudent at the time," the official said.

The resignation came after the Biden administration began last weekend loading Haitian migrants who crossed into the country from Mexico onto aircraft and flying them back to Haiti. Many of the thousands who crossed the border actually traveled from South America, where some said they fled to years ago from the grinding poverty of Haiti.

Thousands of Haitians have been stuck in Mexican border towns since 2016, when the Obama administration abruptly halted a policy that initially allowed them in on humanitarian grounds. Online messages touting the Mexican town of Ciudad Acuña, across from Del Rio, started after President Joe Biden took office and began reversing some of the Trump administration’s immigration policies.

Foote’s sudden departure leaves a void in U.S. policy toward Haiti and adds another prominent, critical voice to the administration’s response to Haitians camped on the Texas border. The Biden administration’s U.S. Ambassador Michele Sison, another career diplomat, is expected to depart soon after being nominated to serve as the State Department's assistant secretary of international organization affairs.

The camp has shrunk considerably since surpassing more than 14,000 people on Saturday – many of them expelled and many released in the U.S. with notices to report to immigration authorities. The White House is facing sharp bipartisan condemnation.

Democrats and many pro-immigration groups say efforts to expel thousands of Haitians without a chance to seek asylum violates American principles and their anger has been fueled by images that went viral this week of Border Patrol agents on horseback using aggressive tactics against the migrants. The expulsion flights to Haiti began Sunday and there were 10 by the end of Tuesday, according to Haitian officials. U.S. officials say they are ramping up to seven flights a day, which would mark one of the swiftest, large-scale expulsions from the U.S. in decades. Foote served previously in Haiti as deputy chief of mission and is a former ambassador to Zambia.

In the new role, he worked with the U.S. ambassador to support Haiti after the assassination of President Jovenel Moise. For weeks, he had been quietly pushing in Washington a plan to boost U.S. security assistance to Haiti to pave the way for presidential elections. But Haiti watchers said he became increasingly disappointed with the pace of decision-making in the administration.

"When someone who is tasked with Haiti policy at the highest level resigns because ‘recommendations are ignored and dismissed’ it’s not only troubling, but shows you this administration does not tolerate anyone who won’t go along with their distorted view of the facts,” said Damian Merlo, a Republican strategist who has worked for years on Haiti policy and is now a registered lobbyist for the country’s government. "Dan Foote is a world class diplomat who refuses to be told what do. I wish more foreign service offices had his courage to stand up and call out their bosses.”