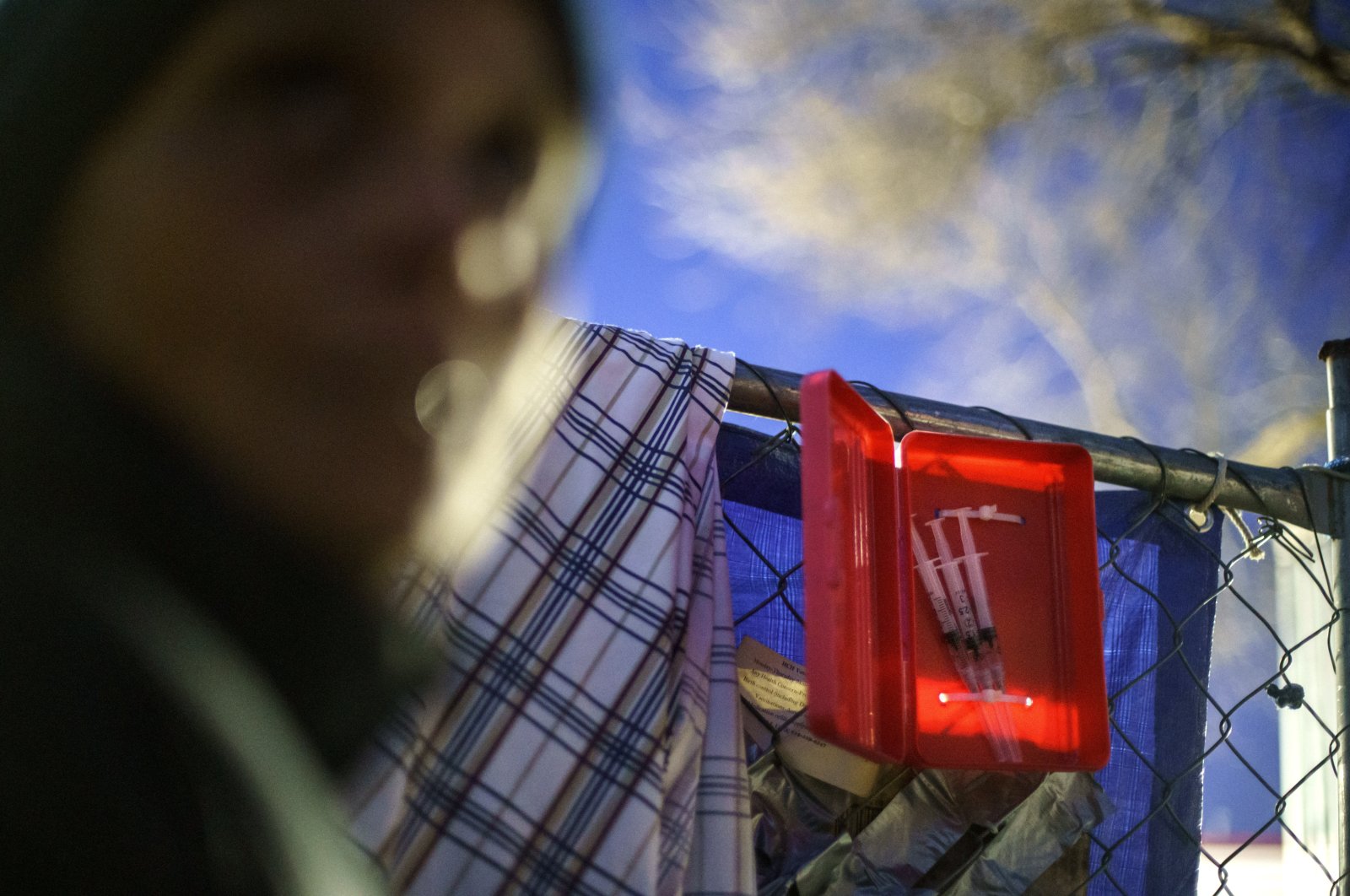 Prefilled syringes of naloxone are ready for use outside the gate where dozens of Native women are living in tents in the lot of an abandoned gas station in south Minneapolis, Nov. 15, 2021. (AP Photo)
by ASSOCIATED PRESS Dec 22, 2021 11:30 am
RECOMMENDED

Rachel Taylor kissed her fingertips and pressed them to the crow sewn onto a leather bag on the couch in the living room. "Oh, my baby,” she whispered. She hugged the buckskin satchel filled with her son’s ashes.

Nearly a year ago, she opened his bedroom door and screamed so loud she woke the neighbor. Kyle Domrese was face down on his bed, one of more than 100,000 Americans lost in a year to drug overdose as the COVID-19 pandemic aggravated America’s addiction disaster.

When he was 4, the medicine man had given him his Ojibwe name: Aandegoons – "little crow.” She traced the outline of the black bird on the sack.

"Love you,” Taylor said to the bag, as she does each time she leaves her home in this city surrounded by three Ojibwe reservations in remote northern Minnesota.

As the pandemic ravaged the country, deaths from drug overdoses surged by nearly 30%, climbing to a record high. The drug crisis also diversified from an overwhelmingly white affliction to killing people of color with staggering speed. The death rate last year was highest among Native Americans, for whom COVID-19 piled yet more despair on communities already confronting generations of trauma, poverty, unemployment and underfunded health systems.

"Their death certificates say they died of an overdose, but that’s not right,” one member of their study group said.

These deaths were a culmination of far more than that: Despite their resilience, Native Americans carry in their blood 500 years worth of pain from being robbed of their land, their language, their culture, their children. In living people’s memory, children were taken from their families and sent to boarding schools with the motto, "Kill the Indian, save the man.”

"What they died of is a broken heart,” the study says.

For years, Taylor tried to break the cycle.

Her grandmother was sent to a boarding school, where she was taught to be so ashamed of her Ojibwe language that she would only speak it once she’d eased the pain by drinking.

Taylor had her daughter when she was 19 and her son a few years later. She’d lost custody of them for a couple of years as she battled her own addiction. She told them she wished she could fix all the dysfunctional things that happened when she was using.

Taylor had lived in more than 50 places before she turned 18, and faced sexual, physical and mental abuse.

She prayed to her creator to spare her children and told her son every day that she loved him.

White Earth Nation too worked hard to save its people from addiction, and in many years lost no one to overdoses on the reservation. But then the pandemic arrived and proved too painful for some.

Taylor and her son quarantined together at her home in Bemidji, a city of 15,000 people.

He’d started abusing pills as a teenager when he got a prescription after having surgery for an infected finger. Then, consumed by the madness of addiction, he would smoke anything – methamphetamine, heroin, fentanyl – that might quiet his anxiety and depression.

The months of isolation dragged on and he said it seemed like the pandemic would never end. He told her he felt like a bum.

"He just gave up,” she said. All around them, people were dying.

The number of overdoses the regional drug task force investigated skyrocketed from 20 in 2019 to 88 last year, said Joe Kleszyk, its commander. Fifteen of those were fatal, triple the year before.

This year, there have been 148 overdoses, 24 of those victims died. The vast majority were Native American.

When the American government forced Native Americans off their land, it signed treaties with tribes promising to provide them with necessities like health care. The dead from addiction prove it’s never kept its word, said Minnesota Sen. Tina Smith.

Indian health care has been underfunded for years. The national average for health care spending is just over $11,000 per person, but tribal health systems receive about a third of that and urban Indian groups even less, according to the National Council of Urban Indian Health. COVID-19 dealt another blow to this already stressed system.

Smith introduced a bill this summer that would usher $200 million in grants to Indian organizations to bolster mental health and addiction treatment. It is stalled in Congress.

"I’m sick of telling people that their kids are dead,” Kleszyk said.

"It was like my heart knew before I did,” she said. "My heart was broken four days before he even died.”

On Jan. 11, she opened his bedroom door. His skin was purple and ice cold.

"Come back, my baby, come back,” she screamed.

The toxicology report said that he’d died of a combination of alprazolam, the drug in Xanax, and fentanyl.

At first, she put his ashes in an urn, but it was sharp metal. A friend made the buckskin bag that she could hug.

The anniversary of his death is approaching on Jan. 11, and it is customary in her culture to return him to nature after a year of grieving.

But every morning, she kisses his bag. He’d always loved to laugh, so Taylor teases it.

"The medicine man says I have to let him go back to the Earth,” she said. "But I don’t think I’m going to be able to do that. He left me too soon.”