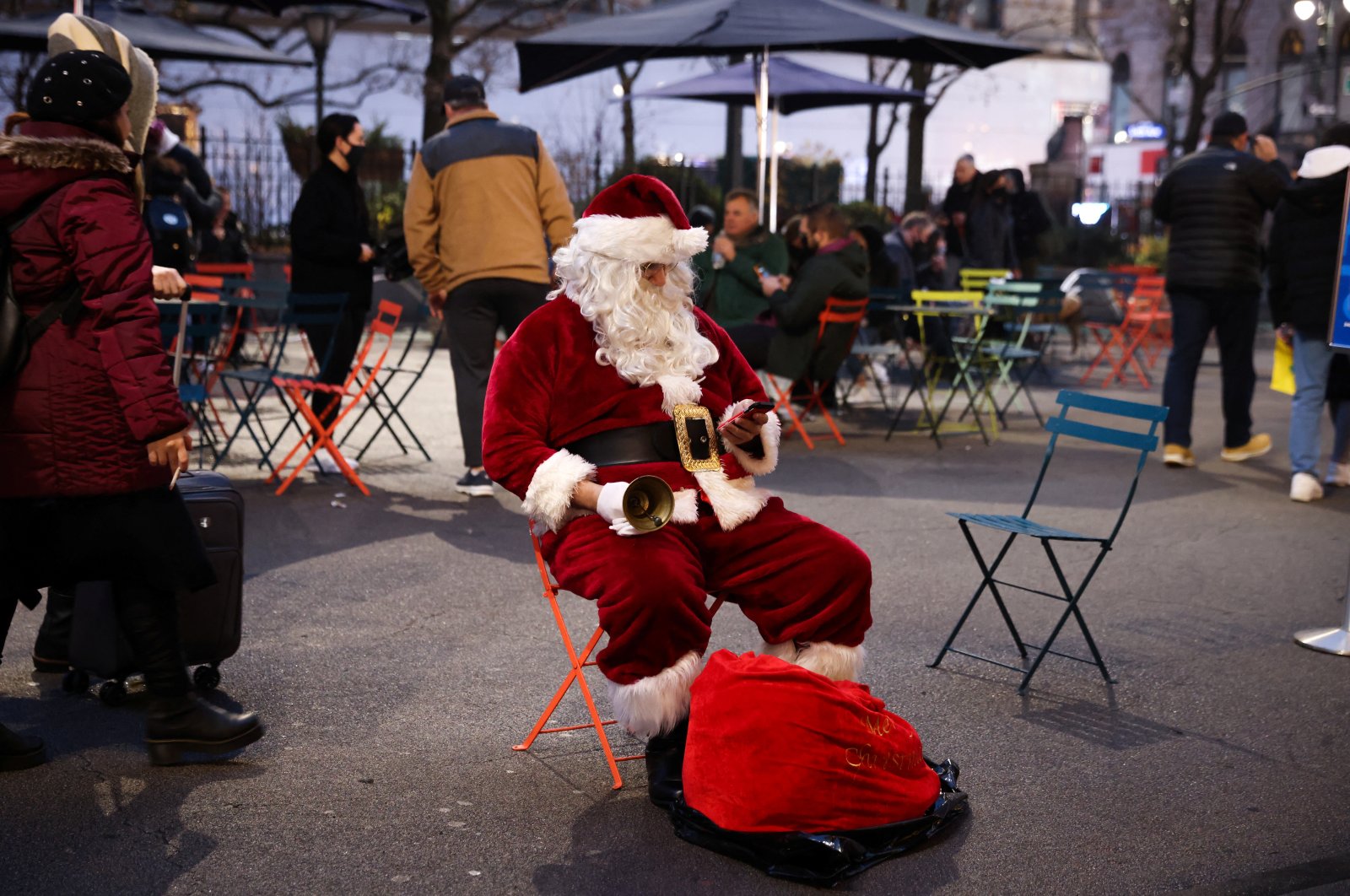 A person dressed as Santa Claus checks his cellphone as he sits outside of Macy's Herald Square as the omicron coronavirus variant continues to spread, in Manhattan, New York City, U.S., Dec. 18, 2021. (Reuters Photo)
by DAILY SABAH WITH AP Dec 21, 2021 10:01 am

The U.S. authorities sounded the alarm over surging infections as the omicron strain accounted for 73% of new cases over the past week, while the country's state of Texas reported first known variant-related death

Omicron has raced ahead of other variants and is now the dominant version of the coronavirus in the United States, accounting for 73% of new infections last week, federal health officials said Monday.

The Centers for Disease Control and Prevention (CDC) numbers showed nearly a sixfold increase in omicron's share of infections in only one week.

In much of the country, it's even higher. Omicron is responsible for an estimated 90% or more of new infections in the New York area, the Southeast, the industrial Midwest and the Pacific Northwest. The national rate suggests that more than 650,000 omicron infections occurred in the U.S. last week.

Since the end of June, the delta variant had been the main version causing U.S. infections. As recently as the end of November, more than 99.5% of coronaviruses were delta, according to CDC data. CDC Director Dr. Rochelle Walensky said the new numbers reflect the kind of growth seen in other countries.

"These numbers are stark, but they're not surprising," she said.

Scientists in Africa first sounded the alarm about omicron less than a month ago and on Nov. 26 the World Health Organization (WHO) designated it as a "variant of concern." The mutant has since shown up in about 90 countries.

“There is now consistent evidence that omicron is spreading significantly faster than the delta variant,” the United Nations agency’s chief Tedros Adhanom Ghebreyesus told a news briefing in Geneva on Monday.

Much about the omicron variant remains unknown, including whether it causes more or less severe illness. Early studies suggest the vaccinated will need a booster shot for the best chance at preventing omicron infection but even without the extra dose, vaccination still should offer strong protection against severe illness and death.

"All of us have a date with omicron," said Dr. Amesh Adalja, a senior scholar at the Johns Hopkins Center for Health Security. "If you're going to interact with society, if you're going to have any type of life, omicron will be something you encounter, and the best way you can encounter this is to be fully vaccinated."

Adalja said he was not surprised by the CDC data showing omicron overtaking delta in the U.S., given what was seen in South Africa, the U.K. and Denmark. He predicted a spread over the holidays, including breakthrough infections among the vaccinated and serious complications among the unvaccinated that could stress hospitals already burdened by delta.

Dr. Eric Topol, head of the Scripps Research Translational Institute, said other countries had seen omicron's fast growth, but the U.S. data showed "a remarkable jump in such a short time."

Topol also said it's unclear how much milder omicron really is compared with other variants. "That's the big uncertainty now."

The CDC's estimates are based on thousands of coronavirus specimens collected each week through university and commercial laboratories and state and local health departments. Scientists analyze their genetic sequences to determine which versions of the COVID-19 viruses are most abundant.

On Monday, the CDC revised its estimate for omicron cases for the week that ended Dec. 11, after analyzing more samples. About 13% of the cases that week were from omicron, not the 3% previously reported. The week before, omicron accounted for just 0.4% of cases. CDC officials said they do not yet have estimates of how many hospitalizations or deaths are due to omicron.

Though there remain a lot of new infections caused by the delta variant, "I anticipate that over time that delta will be crowded out by omicron," Walensky said.

Meanwhile, Texas’ Harris County has recorded its first death related to the new omicron COVID-19 variant. County health officials said a man who was unvaccinated is believed to be the first known recorded omicron fatality in the United States, ABC News reported.

As coronavirus cases surge in the days before Christmas, U.S. President Joe Biden plans to stress in a speech the importance of getting vaccinated to protect from the wave of infections tied to the new omicron variant.

In a preview of Biden’s speech Tuesday afternoon, White House press secretary Jen Psaki said at Monday’s press briefing that the president doesn’t plan to impose any lockdowns and will instead be encouraging people to get inoculated – and, if they’re eligible, to get their booster shot.

Biden’s top medical adviser, Dr. Anthony Fauci, said over the weekend that Biden will issue “a stark warning of what the winter will look like” for unvaccinated Americans.

Biden has found himself in the delicate position of both alerting the country to the dangers posed by omicron and reassuring Americans that the vaccines will protect them. White House officials are looking to ease the nation back toward accepting the reality of an endemic virus with far lower stakes for the vaccinated. This has meant setting a difficult balance as cases rise and as deaths and serious illness among the unvaccinated dominate headlines.

Underscoring how widespread the virus is, the White House said late Monday that Biden had been in close contact with a staff member who later tested positive for COVID-19. The staffer spent about 30 minutes around the president on Air Force One on Friday on a trip from Orange, South Carolina, to Philadelphia. The staffer, who was fully vaccinated and boosted, tested positive earlier Monday, Psaki said.

Psaki said Biden has tested negative twice since Sunday and will test again on Wednesday. Citing guidance from the Centers for Disease Control and Prevention, Psaki said Biden didn’t need to quarantine and would continue with his regular schedule.

There are 40 million eligible but unvaccinated American adults. Efforts to increase vaccination rates have struggled to overcome a series of political, social and cultural divides. Psaki said the president plans to appeal to survival instincts.

“Our health experts assess that you are 14 times more likely to die of COVID if you have not been vaccinated versus vaccinated,” she said Monday.

Leana Wen, the former public health commissioner for Baltimore, said she would like to hear Biden commit in his speech to having enough tests available within three months so that every family can test twice a week. Other countries have already done this, she noted.

“Every family testing twice a week is the goal that we should get to,” Wen said in an interview.

Wen, who teaches public health at George Washington University, said she’d also like to see more restrictions put in place on the still-sizeable portion of the public that remains unvaccinated, such as following some cities and requiring proof of vaccination to be admitted to bars, restaurants, concert venues and gyms, for example. Further complicating Biden’s message is uncertainty about the omicron variant.

“We will have to reserve the possibility of taking further action to protect the public,” Johnson said Monday. “The arguments, either way, are very, very finely balanced.”

The Dutch government began a tough nationwide lockdown on Sunday to rein in sharply rising infections, but many European leaders have opted for something less.

France and Germany have barred most British travelers from entering, and the government in Paris has banned public concerts and fireworks displays at New Year’s celebrations. Ireland imposed an 8 p.m. curfew on pubs and bars and limited attendance at indoor and outdoor events, while Greece will have 10,000 police officers on duty over the holidays to carry out COVID-19 pass checks.

In Spain, the national average of new cases is double what it was a year ago. But authorities in the country with one of Europe’s highest vaccination rates are betting primarily on mandatory mask-wearing indoors and the rollout of booster shots, with no further restrictions planned.

Neighboring Portugal is telling most nonessential workers to work from home for a week in January, but the country has no other new measures in the pipeline.

Stock markets in Asia, Europe and the U.S. fell on Monday with the expectation that the infections could weigh on global economic growth and worsen global supply chain challenges.