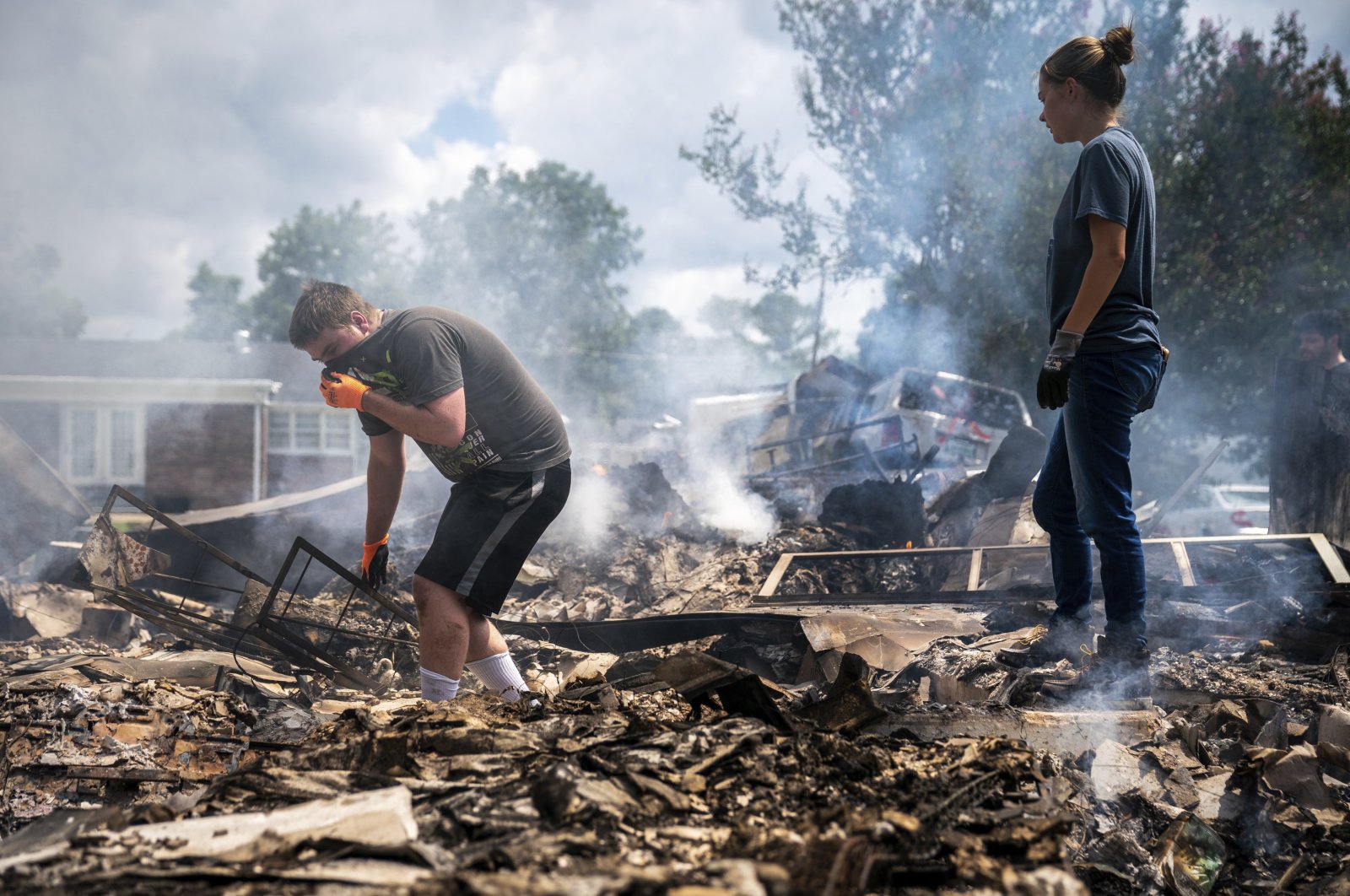 Josh Whitlock and Stacy Mathieson look through what is left of their home after it burned following flooding in Waverly, Tenn., Aug. 22, 2021. (AP Photo)
by French Press Agency - AFP Aug 23, 2021 8:57 am
RECOMMENDED

Devastating floods after record rainfall in the southern United States state of Tennessee have left at least 22 people dead and at least 20 more missing, local officials said Sunday in what they warned was a preliminary toll.

Tennessee was hit Saturday by what meteorologists called historic storms and flooding, dumping as much as 17 inches (38 centimeters) of rain. Rural roads, state highways, bridges and hundreds of homes were washed out and widespread power outages affected thousands of people.

In Humphreys County, about 90 minutes from country music hub Nashville, the downpour on Saturday broke a 24-hour rainfall record for Tennessee, the National Weather Service said. Tennessee Gov. Bill Lee described "picture of loss and heartache" in Waverly, a hard-hit town of around 4,500 where 20 of the victims died.

"Our hearts and our prayers need to be for those folks in that community, many of them who have suffered not only the loss of their homes but the loss of family members and friends," he said in a televised news conference Sunday after touring the wreckage.

Police chief Grant Gillespie said the other death was in a more remote area of the county. Initially, about 40 people were reported missing, but by late afternoon that number had been halved. "We're hopeful that we're getting to the end of that list," Gillespie told reporters.

Authorities have imposed a nighttime curfew amid efforts to account for the missing. Gillespie also urged Waverly residents to remain inside after 8 p.m. because of "problems with a small amount of looting and trespassing."

Search and rescue operations were continuing Sunday, with workers going from home to home to search for victims or those needing assistance. The rising water had struck Waverly so quickly that some people were unable to escape, local officials said. Karen Phair, 61, told local newspaper The Tennessean that Waverly looked like "a war zone."

Humphreys County resident Rickey Larkin, 62, told The New York Times he and his wife had to cling to a mattress as a life raft after "an ocean" engulfed his home. "We came about a foot from drowning. I thought we were gone," he said.

The Waverly Department of Public Safety posted on its Facebook page a list of names of missing people, and asked for the public's help finding them.

In Washington, U.S. President Joe Biden began an afternoon news conference by expressing his "deepest condolences for the sudden and tragic loss of life" in Tennessee.

Humphreys County Sheriff Chris Davis told a CNN affiliate that the dead included two toddlers. Davis himself lost a friend to the floods.

"They just went and got one of my best friends and recovered him. He drowned in this," the sheriff said. "It's tough, but we're going to move forward."

Half a dozen children are among the missing, he said. Photos posted on social media showed a row of homes nearly submerged in brown floodwater, cars flipped over or piled on top of one another and roads covered in mud and debris.

"The news media has been very focused on what's happening in other areas – Haiti, Afghanistan, hurricanes coming into the northeast – but I think that we need to understand that the devastation here in Tennessee has been every bit as significant," said U.S. Sen. Bill Hagerty after visiting a flood-devastated school.