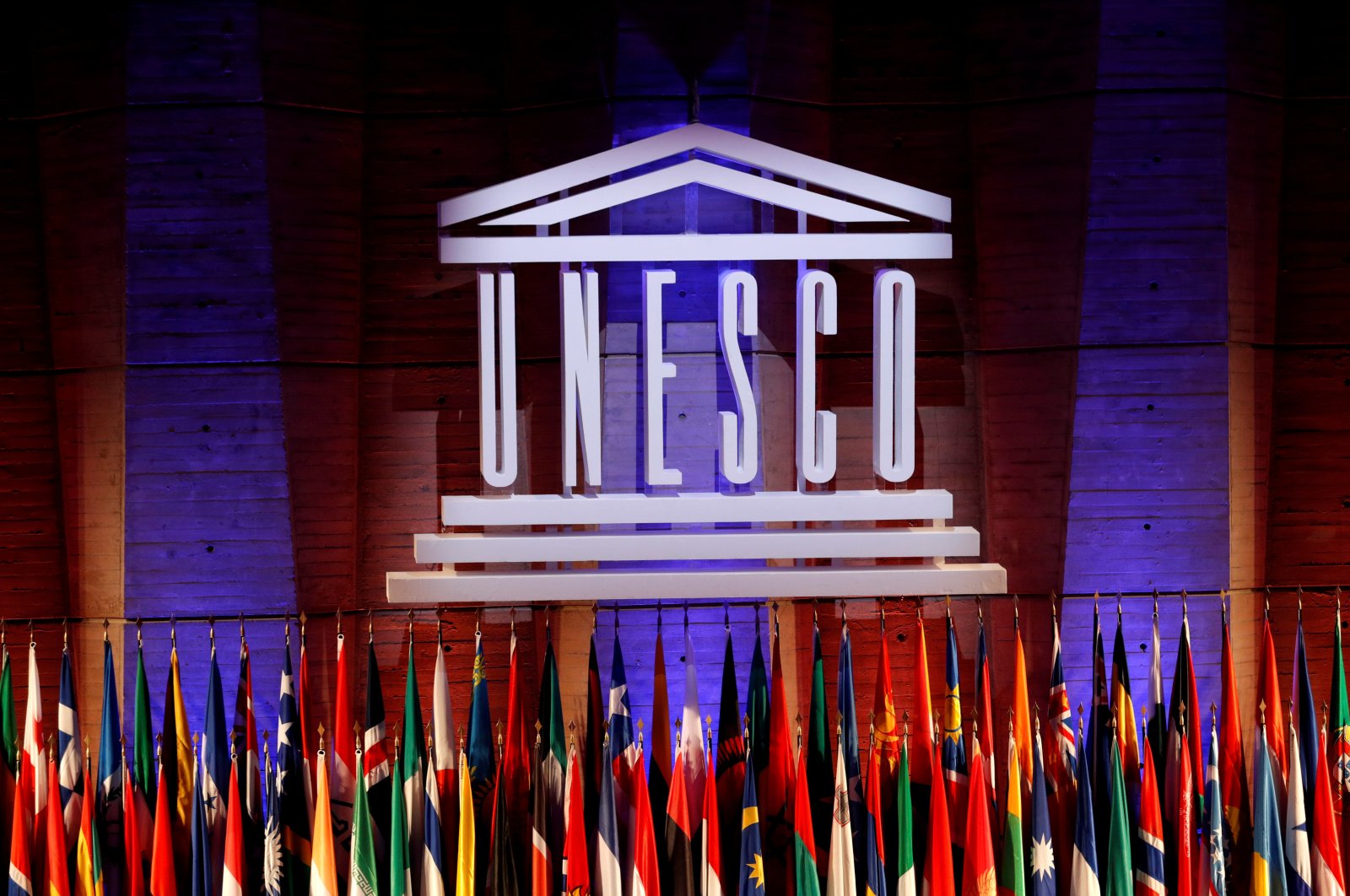 The UNESCO logo is seen during the opening of the 39th session of the General Conference of the United Nations Educational, Scientific and Cultural Organization (UNESCO) at their headquarters in Paris, France, Oct. 30, 2017. (Reuters Photo)
by REUTERS Dec 05, 2020 9:25 pm
RECOMMENDED

Three years after the United States quit UNESCO, the United Nations' cultural agency, over accusations of anti-Israel bias, diplomats say the Paris-based body has managed to put its house in order, potentially easing the way for Washington's return.

The agency, founded in the ashes of World War II to protect the common cultural inheritance of humanity, was thrown into turmoil after the United States, which provided a fifth of its funding, pulled out.

It underscored the skepticism expressed by Republican President Donald Trump about the need for the United States to remain engaged in multilateral bodies and set the tone for a review and exit of several international accords and organizations.

But that could be about to change. While no direct contact has taken place with the incoming administration, diplomats say Democratic President-elect Joe Biden is open to a return, although congressional issues may slow that down.

"The U.S. withdrawal was tough, but it enabled it (UNESCO) to go back to basics," said a European diplomat. "That meant trying to depoliticize it, especially with regard to the Israeli-Palestinian issue, which took precedence over everything."

UNESCO – the United Nations Educational, Scientific and Cultural Organization – is best known for designating and protecting archaeological and heritage sites, from the Galapagos Islands to the tombs of Timbuktu.

Most of its activities are uncontroversial, but when it came to, say, resolutions about how religious sites should be run in Jerusalem, every word was studied for accusations of bias.

According to diplomats, those tensions have calmed with resolutions now passing more easily after direct mediation between UNESCO and the two parties, even though Israel also pulled out of the organization.

"UNESCO made very good improvements in terms of appeasing some of the political tensions and polarization. It's better managed and better managed financially," Henok Teferra Shawl, Ethiopia's envoy to the body, told Reuters.

He added that its director-general, Audrey Azoulay, was last week endorsed by a majority of the 58 Executive Board member states ahead of next year's election, opening the door to her reelection – in stark contrast to a bitter campaign in 2017.

The body has had to fill a gaping financial hole. The United States left with $542 million in arrears. By 2017, UNESCO's budget of about $300 million was half of its 2012 budget, meaning it was forced to freeze hiring, cut programs and fill gaps with voluntary contributions.

UNESCO says the budget from member states is now $534.6 million, with a further $189 million coming from extra voluntary budgetary contributions.

A U.S. return, done through a letter informing the body, would also mean that Washington would repay its arrears at some stage.

Biden has a history with the organization. He went to UNESCO when he was vice president and his wife, Jill, has been involved in past teaching programs.

But things may prove complicated given a U.S. law that forbids the United States from funding U.N. bodies that have admitted Palestine as a full member, although a waiver can be sought.

"Biden has said that he wants to renew with multilateralism, so UNESCO should be one of those which benefits from that, but the Palestinian issue may complicate the speed of that return," said a U.S. official who asked not to be identified.