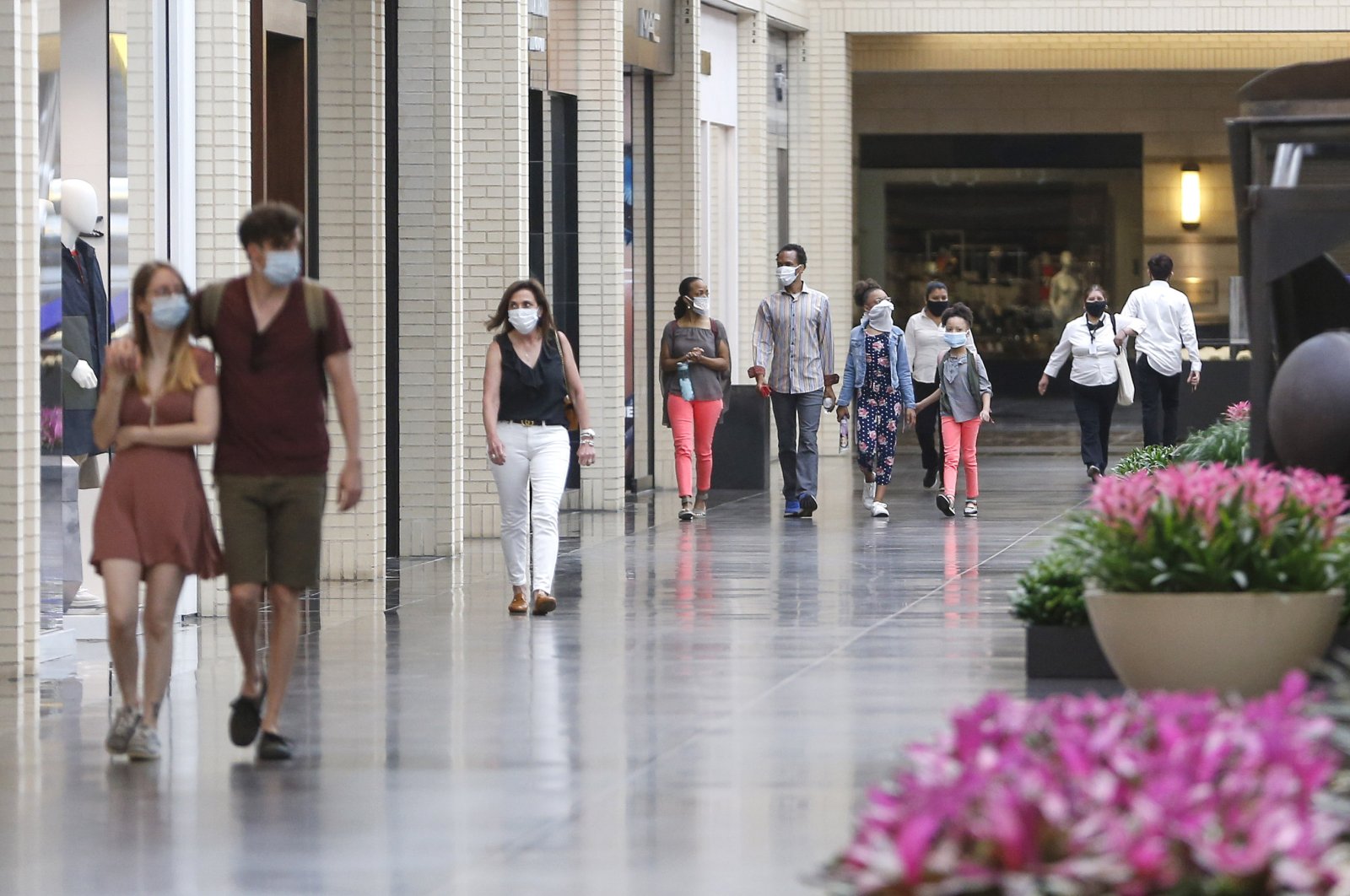 Shoppers walk through NorthPark Center mall on Friday, May 1, 2020 in Dallas, Texas. (The Dallas Morning News via AP)
by ASSOCIATED PRESS May 02, 2020 9:30 am
RECOMMENDED

More than a dozen states let restaurants, stores or other businesses reopen Friday in the biggest one-day push yet to get their economies up and running again, acting at their own speed and with their own quirks and restrictions to make sure the coronavirus doesn't come storming back.

People in Louisiana could eat at restaurants again but had to sit outside at tables 10 feet (3 meters) apart with no waiter service. Maine residents could attend church services as long as they stayed in their cars. And a Nebraska mall reopened with plexiglass barriers and hand-sanitizing stations but few shoppers.

“I feel like I just got out of jail!” accountant Joy Palermo exclaimed as she sat down with a bacon-garnished bloody Mary at the Gretna Depot Cafe outside New Orleans.

Meanwhile, the first drug shown to help fight COVID-19 won emergency approval from the U.S. Food and Drug Administration. In a major study, remdesivir shortened patients' recovery time from 15 days to 11 on average and may have also reduced deaths.

The virus has killed more than 230,000 people worldwide, including over 64,000 in the U.S. and more than 20,000 each in Italy, Britain, France and Spain, forcing lockdowns that have shuttered factories and businesses, thrown tens of millions out of work and throttled the world's economies.

President Donald Trump said Friday that he’s hoping the total number of COVID-19 deaths in the United States will be below 100,000, which he acknowledged is a “horrible number.” Trump’s predictions of the expected U.S. death toll have changed over time, with his earlier 60,000 projection now being eclipsed. But he said at a White House event that “maybe millions of lives” have been saved by shutting down the economy.

With the crisis stabilizing in Europe and in many places in the U.S., countries and states are gradually easing their restrictions amid warnings from health experts that a second wave of infections could hit unless testing for the virus is expanded dramatically.

In much of Colorado, people could get their hair cut and shop at stores again, though stay-at-home orders remained in place in Denver and surrounding counties. Wyoming let barbershops, nail salons, gyms and daycare centers reopen. In Maine, golf courses, hairdressers and dentists opened.

Hotels near South Carolina beaches opened and state parks unlocked their gates for the first time in more than a month. But in Myrtle Beach, the state’s most popular tourist destination, hotel elevators will be restricted to one person or one family — a potential inconvenience at the area's 15- and 20-story resorts.

Texas’ reopening got underway with sparse crowds at shopping malls and restaurants allowing customers to dine in, though only at 25% capacity in most places. A video posted on social media showed a city park ranger in Austin getting shoved into the water Thursday while asking people in a crowd to keep 6 feet (2 meters) apart from each other. Police charged a 25-year-old man with attempted assault.

At Gattuso’s Restaurant in Gretna, Louisiana, Kent and Doris Alimia and their daughters, Molly and Emily, celebrated Molly Alimia’s 22nd birthday at one of the outdoor tables, which were screened by plants in wooden planters 5 feet high.

“It’s a nice change of scenery to actually get out of the house,” Molly Alimia said.

Outside Omaha, Nebraska, Jasmine Ramos was among a half-dozen shoppers wandering the open-air Nebraska Crossing mall. Most wore masks.

“I do think it’s a little soon, but it’s kind of slow and there aren’t a lot of people here, so I’m not too worried,” Ramos said.

Restrictions were still in place in Arizona, but warnings from police and health officials didn’t stop Debbie Thompson from serving food Friday inside her Horseshoe Cafe in Wickenburg, a town of 6,300 people about 65 miles (105 kilometers) west of Phoenix. Cheered on by a few customers, Thompson was not arrested, but she later received a call from the state Department of Health Services telling her to stop violating Gov. Doug Ducey’s stay-at-home order.

Around the country, protesters have demanded governors reboot the battered economy. More than 100 people chanted and carried signs in front of Chicago’s Thompson Center, where Illinois Gov. J.B. Pritzker has an office, to call for an end to the statewide lockdown.

Pritzker has said he will not lift his order until it's safe, and several counterprotesters expressed support for his position. Nurse anesthetist Benjamin Salazar held up a sign that read, “Stay home. We are getting tired of seeing people die.”

New Mexico Gov. Michelle Lujan Grisham invoked the state’s Riot Control Act as she sealed off all roads to nonessential traffic in the city of Gallup, population 70,000, to help control a surging coronavirus outbreak in the former trading post on the outskirts of the Navajo reservation.

In the hardest-hit corner of the U.S., New York Gov. Andrew Cuomo said schools and colleges will remain closed through the rest of the academic year. A New York City nursing home on Friday reported the deaths of 98 residents believed to have had the coronavirus — a staggering death toll that shocked public officials.

In Washington state, where the nation’s first COVID-19 case was confirmed in January, Gov. Jay Inslee said Friday that he is extending the state’s coronavirus stay-at-home order through at least May 31 and that he will ease the restrictions in four stages. Washington also had the first deadly cluster of cases in the U.S., at a Seattle-area nursing home.

And in Michigan, Gov. Gretchen Whitmer said Friday that her stay-at-home order remains in effect through May 15 despite Republicans’ refusal to extend her emergency declaration.

In the U.S., Shani and Sergei Oveson were excited to resume dine-in seating at their small Salt Lake City restaurant, which has seen an 85% drop in sales since mid-March. Their place, the Ramen Bar, had only half the normal seating capacity because of social-distancing requirements.

“We’re really excited to be open, but at the same time we’re scared that the virus will reignite and we’ll have to close again,” Shani Oveson said. “Owning your own business can be so scary financially, we have to risk getting sick to survive.”