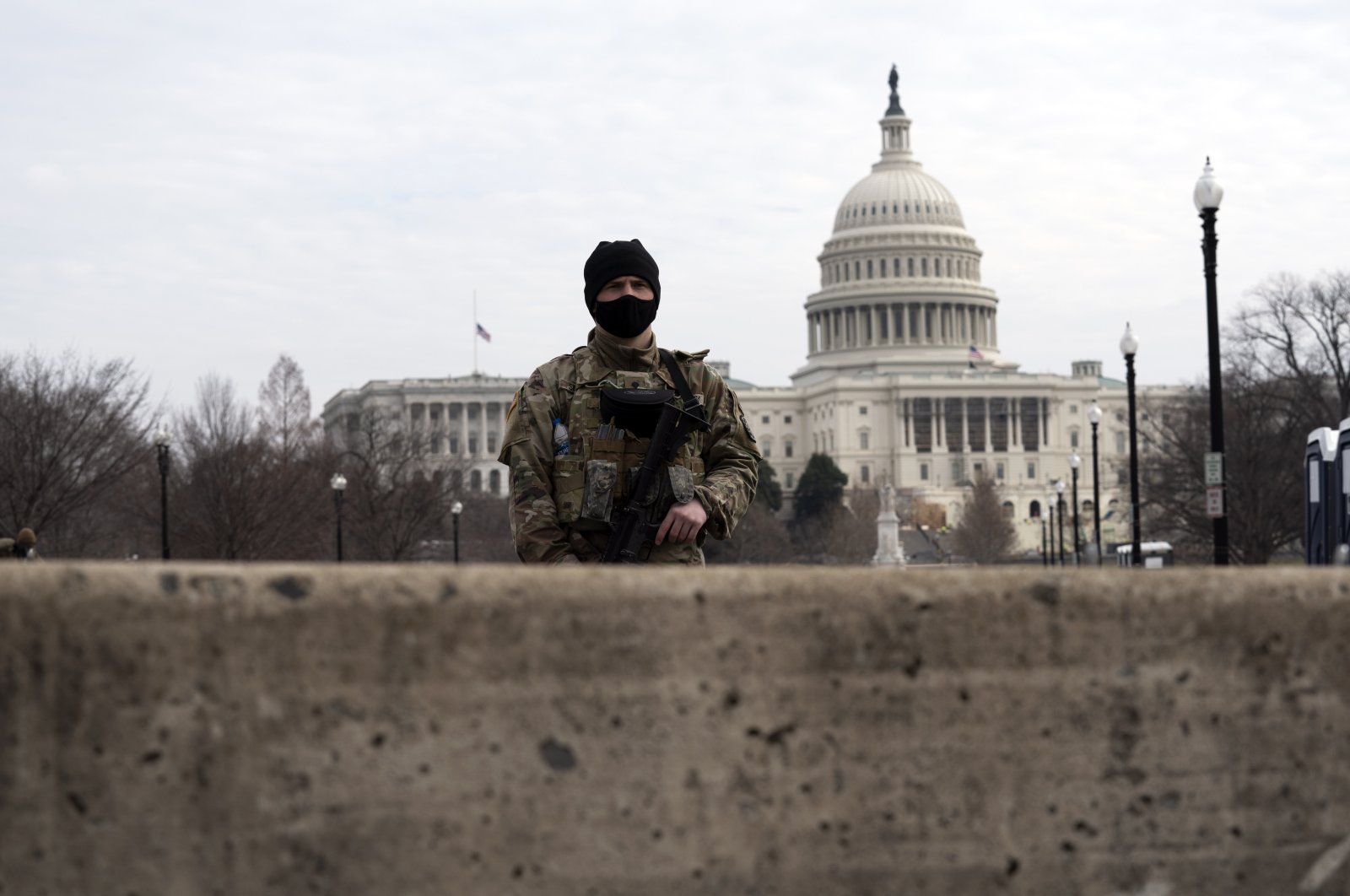 Members of the National Guard patrol the area outside of the U.S. Capitol during the impeachment trial of former President Donald Trump at the Capitol in Washington, D.C., U.S., Feb. 10, 2021. (AP Photo)
by ASSOCIATED PRESS Feb 11, 2021 9:07 am
RECOMMENDED

Chilling security video of last month's deadly insurrection at the U.S. Capitol, including of rioters searching menacingly for House Speaker Nancy Pelosi and Vice President Mike Pence, has become a key exhibit in Donald Trump's impeachment trial as lawmakers prosecuting the case wrap up their opening arguments for why Trump should be convicted of inciting the siege.

The House will continue with its case Thursday, with Trump’s lawyers set to launch their defense by week's end.

The footage shown at trial, much of it never before seen, has included video of the mob smashing into the building, distraught members of Congress receiving comfort, rioters engaging in hand-to-hand combat with police and audio of Capitol police officers pleading for back-up. It underscored how dangerously close the rioters came to the nation's leaders, shifting the focus of the trial from an academic debate about the Constitution to a raw retelling of the Jan. 6 assault.

Videos of the siege have been circulating since the day of the riot, but the graphic compilation shown to senators Wednesday amounted to a more complete narrative, a moment-by-moment retelling of one of the nation’s most alarming days. It offered fresh details into the attackers, scenes of police heroism and staff whispers of despair.

The footage included rioters roaming the halls chanting “Hang Mike Pence,” some equipped with combat gear. Outside, the mob had set up a makeshift gallows. And in one wrenching moment, police were shown shooting and killing a San Diego woman, Ashli Babbitt, as the mob tried to break through doors near the House Chamber.

Pence, who had been presiding over a session to certify Joe Biden’s election victory over Trump – thus earning Trump’s censure – was shown being rushed to safety, where he sheltered in an office with his family just 100 feet from the rioters. Pelosi was seen being evacuated from the complex as her staff hid behind doors in her suite of offices.

Though most of the Senate jurors seem to have made up their minds, making Trump's acquittal likely, they sat riveted as the jarring video played in the chamber. Republican Sen. James Lankford of Oklahoma bent his head at one point, another GOP colleague putting his hand on his arm in comfort.

“They did it because Donald Trump sent them on this mission,” said House prosecutor Stacey Plaskett, the Democratic delegate representing the Virgin Islands.

“President Trump put a target on their backs and his mob broke into the Capitol to hunt them down," she said.

Sen. Mitt Romney, R-Utah, saw himself in the footage, dashing down a hallway to avoid the mob. Romney said he hadn't realized that officer Eugene Goodman, who has been praised as a hero for luring rioters away from the Senate doors, had been the one to direct him to safety.

“That was overwhelmingly distressing and emotional,” he said.

Earlier in the day, prosecutors laid out their case by methodically linking Trump's verbal attacks on the election to the violence that resulted when hundreds of loyalists stormed the building. Trump did nothing to stem the violence and watched with “glee,” the Democrats said, as the mob ransacked the building. Five people died.

The goal of the presentation was to cast Trump not as an innocent bystander but rather as the “inciter in chief” who spent months spreading falsehoods about the election. Using evocative language meant to match the horror of the day, they compared Trump to a fire chief who delights in seeing fires spread, not extinguished, and they compared his supporters to cavalry in war.

“This attack never would have happened, but for Donald Trump,” Rep. Madeleine Dean, one of the impeachment managers, said as she choked back emotion. “And so they came, draped in Trump’s flag, and used our flag, the American flag, to batter and to bludgeon.”

Thursday brings the second and final full day of House arguments, with the Trump legal team taking the lectern Friday and Saturday for up to 16 hours to lay out their defense. The difficulty facing Trump’s defense team became apparent at the start as they leaned on the process of the trial, unlike any other, rather than the substance of the case against the former president.

The prosecutors on Wednesday aimed to preemptively rebut arguments that Trump's lawyers have foreshadowed as central to their defense, arguing for instance that there was no First Amendment protection for the president's role in directly inciting the insurrection. Defense lawyers are likely to blame the rioters themselves for the violence, but the Democrats’ presentation made clear that – despite the vivid videos of the event – they view Trump as ultimately responsible.

Trump is the first president to face an impeachment trial after leaving office and the first to be twice impeached. He is charged with “incitement of insurrection,” words his defense lawyers say are protected by the Constitution’s First Amendment and just a figure of speech. The prosecutors are arguing that Trump’s words weren't just free speech but part of “the big lie” – his relentless efforts to sow doubts about the election results. Those began long before the votes were tabulated, revving up his followers to “stop the steal" though there was no evidence of substantial fraud.

As the House impeachment managers make the case for holding Trump to account, the defense has countered that the Constitution doesn’t allow impeachment of an official who is out of office. Even though the Senate rejected that argument in Tuesday's vote to proceed to the trial, the legal issue could resonate with Senate Republicans eager to acquit Trump without being seen as condoning his behavior.

Trump attorney David Schoen added starkly partisan tones to the argument, saying the Democrats were fueled by a “base hatred” of the former president.

While six Republicans joined with Democrats to vote to proceed with the trial on Tuesday, the 56-44 vote was far from the two-thirds threshold of 67 votes needed for conviction.

Minds did not seem to be changing Wednesday, even after senators watched the graphic video.

“I’ve said many times that the president’s rhetoric is at time overheated, but this is not a referendum on whether you agree with everything the president says or tweets,” said Sen. Ted Cruz, R-Texas, who was among those leading the effort to challenge the Electoral College tally certifying the election. “This is instead a legal proceeding.”

It appears unlikely that the House prosecutors will call witnesses, and Trump has declined a request to testify. The trial is expected to continue into the weekend.

Trump's second impeachment trial is expected to diverge from the lengthy, complicated affair of a year ago. In that case, Trump was charged with having privately pressured Ukraine to dig up dirt on Biden, then a Democratic rival for the presidency. It could be over in half the time.

The Democratic-led House impeached the president swiftly, one week after the attack.