Those left behind knock US over broken Afghanistan promises 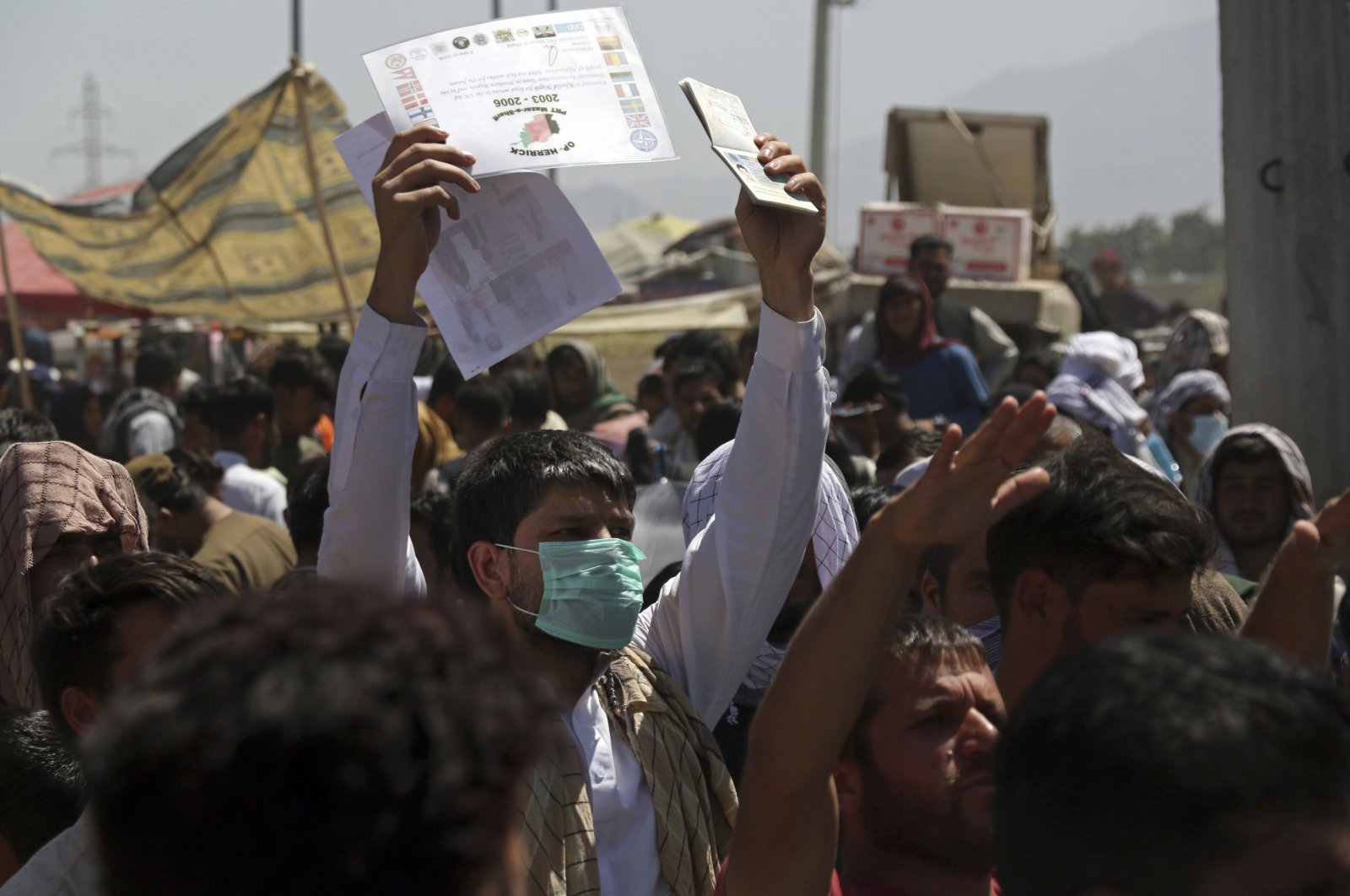 Hundreds of people gather, some holding documents, near an evacuation control checkpoint on the perimeter of the Hamid Karzai International Airport, in Kabul, Afghanistan, Aug. 26, 2021. (AP Photo)
by ASSOCIATED PRESS Sep 02, 2021 9:33 am
RECOMMENDED

In the last days of the United States' shambolic departure from Afghanistan, American officials were calling Javed Habibi assuring that the green cardholder from Richmond, Virginia, his wife and their four daughters would not be left behind.

He was told to stay home and not worry, that they would be evacuated.

Late Monday, however, his heart sank as he heard that the final U.S. flights had left Kabul's airport, followed by the blistering staccato sound of Taliban gunfire, celebrating what they saw as their victory over the U.S.

“They lied to us,” Habibi said of the U.S. government. He is among hundreds of American citizens and green cardholders stranded in the Afghan capital.

Victoria Nuland, undersecretary of state for political affairs, would not address individual cases but said all U.S. citizens and lawful permanent residents who could not get evacuation flights or were otherwise stranded had been contacted individually in the past 24 hours and told to expect further information about routes out once those have been arranged.

“We will communicate directly to them personalized instructions on what they should do, when they should do it, and how the United States government feels we are best positioned to help them do that," added State Department spokesperson Ned Price.

Secretary of State Antony Blinken praised the evacuation effort despite the scenes of thousands of people jammed outside the gates at Kabul's airport. He said between 100 and 200 remained in Afghanistan, promising that any American who wants to leave Afghanistan would be taken out.

For some of those who remain, however, the trauma of trying for nearly two weeks to get onto a U.S. plane is still harrowing.

Habibi, an electrician who has lived in Richmond since 2015 on a special immigration visa, had returned to Afghanistan for a visit on June 22 – the first time his family had been back since 2019. Their return flight was to have been Aug. 31.

About Aug. 18, Habibi said he got an email from the U.S. government saying that his family – all green cardholders except for their youngest, who has a U.S. passport – would be evacuated.

Subsequent emails said he should take his family to the airport. He obeyed, but the mad crush of people prevented him from getting near the gate on his first two attempts.

His daughter, Madina, who at 15 has flawless English and serves as the family spokesperson, said she and her younger sister were almost trampled at the airport. The family wrote back, “It's too dangerous. We can't go into the crowd,” she said.

The emails kept arriving, saying they should go to the airport, she said.

By Aug. 25, the emails had been replaced by phone calls from Arlington, Virginia, Madina said. The callers, who identified themselves as being from the U.S. Embassy, told the family to stay at home and that the government was aware of their location, she said, speaking for her father.

Habibi said he still made four or five more attempts, even recruiting friends and relatives to wade into the crowd with the family, forming a kind of protective cordon. The youngest of the four girls, Dunya, is 2 and was born in the U.S.

Habibi said that on at least two occasions, he got close enough to the gate that his passport was scanned but was refused entry. He shouted at the U.S. soldiers, waving his documents.

“What does this green card even mean? Nothing. They did nothing,” he said.

Madina, who spoke to most of the callers from Virginia, said she told them the family was from Richmond. Even as the evacuations came to an end, Madina said one caller promised, "We are going to get you out. You are not going to get stuck. Don't worry. We know where you are."

Habibi said they even pledged to pick them up in a car.

“They lied. They did nothing," he said.

Habibi says he hasn't been threatened by the Taliban and that no one has bothered him but he is still afraid. News stories and horrifying posts on social media have him convinced that the Taliban will kill him, he said, although he admitted he doesn't know of anyone being targeted.

He said he knows of many families, some with U.S. green cards, who remain in Afghanistan.

Madina said Marcia Vigar Perez, a teacher at her former school of Dumbarton Elementary, started a prayer chain for her safe return.

“Every day they call me,” she said.

Another Afghan native who asked to be identified only as Ajmal, fearing retribution, said he, his two brothers and their families – 16 people in all – were granted emergency immigrant visas to be evacuated after another brother in Virginia submitted the paperwork.

Ajmal displayed emails from the U.S. government that said “please make your way to the Hamid Karzai International Airport" and use the Camp Sullivan Gate, not the civilian entrance, although he also was warned that the gate could change daily.

He said he and his relatives went to the airport, but heavy gunfire by the Taliban and the crush of thousands of people sent them back home. On one occasion, he said he received an email telling him and his family they would be picked up at a spot near the airport at 3 a.m. He and his family waited on the street until 9 a.m., but no one came, he said.

His brother Wais, a U.S. citizen living in Virginia, said he had petitioned senators and filled out paperwork to get his family to the U.S.