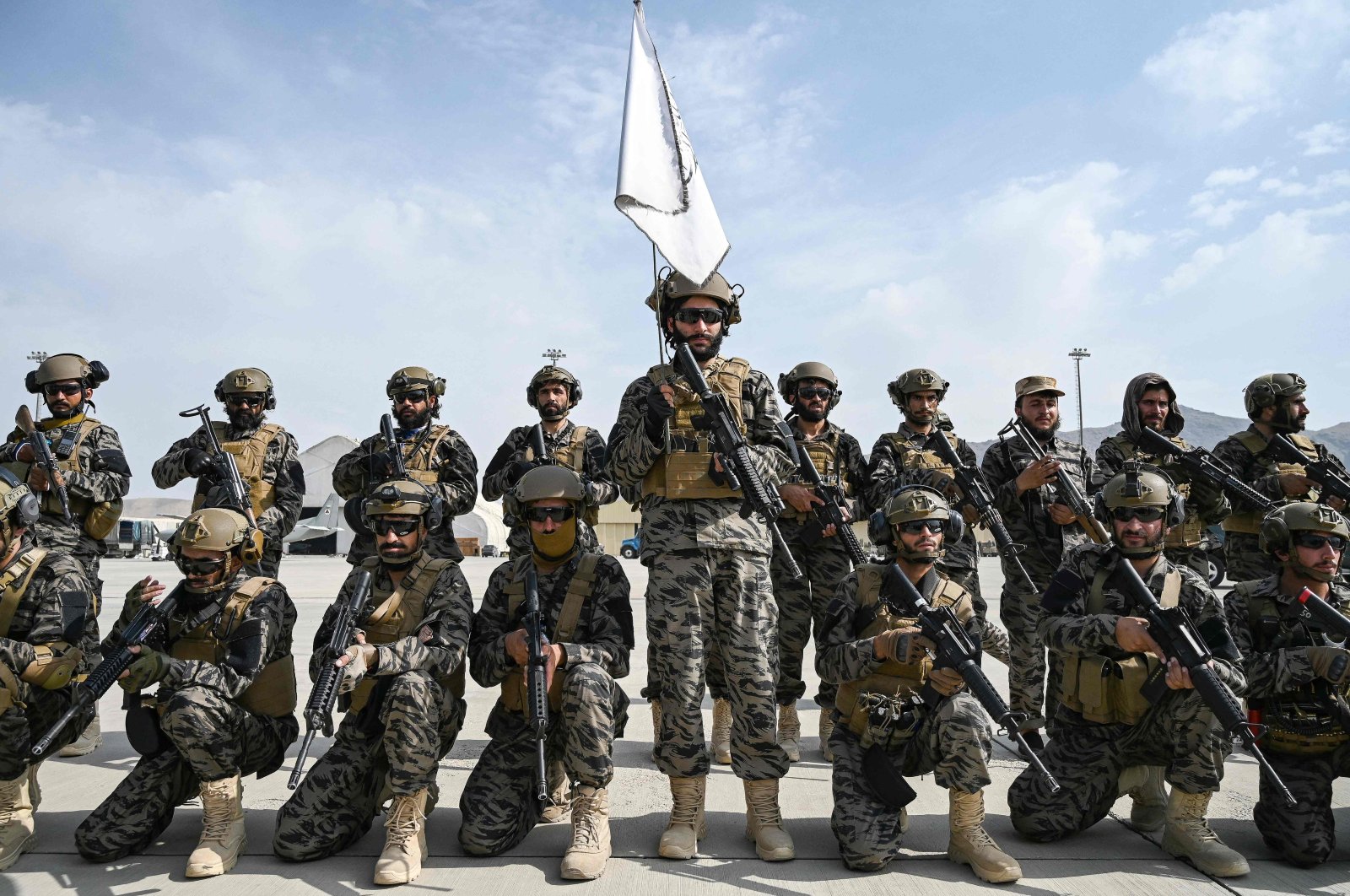 After 20 years, the last U.S. soldier has left Afghanistan without any pomp or ceremony, rushing to flee the country as the Taliban hailed a 'historic moment,' proclaiming 'full independence'

The Taliban joyously fired guns into the air and offered words of reconciliation on Tuesday, as they celebrated defeating the United States and returning to power after two decades of war that devastated Afghanistan.

The last of 6,000 U.S. troops who oversaw a desperate evacuation effort flew out of Kabul Hamid Karzai International Airport on Monday night, ending the war that has diminished the United States' status as a superpower.

The Taliban were in full control of the airport in the country's capital after the last U.S. plane left its runway, marking the end of America's longest war. Vehicles carrying the Taliban raced back and forth along the airport sole runway on the northern, military side of the airfield.

Before dawn broke, heavily armed Taliban fighters walked through hangars, passing some of the seven CH-46 helicopters the State Department used in its evacuations before rendering them unflyable. Taliban leaders later symbolically walked across the runway, marking their victory while flanked by fighters of the insurgents' elite Badri unit.

"The world should have learned its lesson and this is the enjoyable moment of victory," Taliban spokesperson Zabihullah Mujahid said in a livestream posted by a militant. Mujahid also addressed the gathered members of the Badri unit.

"I hope you (will) be very cautious in dealing with the nation," he said, according to The Associated Press (AP). "Our nation has suffered war and invasion and the people do not have more tolerance.”

At the end of his remarks, the Badri fighters shouted: "God is the greatest!” Later speaking to Al-Jazeera Arabic on the tarmac, Mujahid rejected having a caretaker government and insisted that Kabul remained safe.

"There will be security in Kabul and people should not be concerned," he said.

In another interview with Afghan state television, Mujahid also discussed restarting operations at the airport, which remains a key way out for those wanting to leave the country.

"Our technical team will be checking the technical and logistical needs of the airport,” he said. "If we are able to fix everything on our own, then we won’t need any help. If there is need for technical or logistics help to repair the destruction, then we might ask help from Qatar or Turkey.” He didn't elaborate on what was destroyed.

Speaking from Kabul, the reporter from Doha-based Al-Jazeera Charles Stratford said that the “atmosphere is calm” after celebration night.

“For the Taliban, this is a historic victory ... The Taliban have always spoken about their fight in Afghanistan against foreign powers as one of a rite to national sovereignty,” Stratford said.

Marine Gen. Frank McKenzie, the head of U.S. military's Central Command, earlier said troops "demilitarized” the system so it can never be used again. Officials said troops did not blow up equipment in order to ensure they left the airport workable for future flights, once those begin again. In addition, McKenzie said the U.S. also disabled 27 Humvees and 73 aircraft so they cannot be used again.

Taliban fighters draped their white flags over barriers at the airport as others guarded the civilian side of the airfield. Inside the terminal, several dozen suitcases and pieces of luggage were left strewn across the floor, apparently left behind in the chaos. Clothes and shoes also were scattered. A poster of Ahmad Shah Massoud, the famed anti-Taliban fighter, had been destroyed.

"Afghanistan is finally free," said Hekmatullah Wasiq, another Taliban official. "The military and civilian side are with us and in control. Hopefully, we will be announcing our Cabinet. Everything is peaceful. Everything is safe.”

"People have to be patient,” he said. "Slowly we will get everything back to normal. It will take time.”

The airport had seen chaotic and deadly scenes since the Taliban blitzed across Afghanistan and took Kabul on Aug. 15. Thousands of Afghans besieged the airport, some falling to their death after desperately hanging onto the side of an American C-17 military cargo jet. Last week, a Daesh suicide attack at an airport gate killed at least 169 Afghans and 13 U.S. service members. After the attack, U.S. forces launched a series of strikes targeting bombers from a Daesh affiliate group, who America said was planning to stage another terror act against people and foreign troops in the airport. As a result, 10 civilians, including seven children, died as the drone hit civilian houses in the area of Kabul.

The U.S. officials said the casualties occurred because Daesh militants had been carrying explosive materials in a car, but anger over the slain children was sparked across the country and world. On Tuesday, after a night that saw the Taliban fire triumphantly into the air, guards now blearily on duty kept out the curious and those somehow still hoping to catch a flight out.

"After 20 years we have defeated the Americans," said Mohammad Islam, a Taliban guard at the airport from Logar province, cradling a Kalashnikov rifle. "They have left and now our country is free.”

"It’s clear what we want, he said, adding that they want "peace and stability." Mohammad Naeem, a spokesperson for the Taliban's political office in Qatar, similarly praised the takeover in an online video early Tuesday.

"Thank God all the occupiers have left our country completely," he said, congratulating fighters by referring to them as mujahedeen, or holy warriors. "This victory was given to us by God. It was due to 20 years of sacrifice by the mujahedeen and its leaders. Many mujahedeen sacrificed their lives.”

Zalmay Khalilzad, the U.S. special representative who oversaw America’s talks with the Taliban, wrote on Twitter that "Afghans face a moment of decision and opportunity” after the withdrawal. "Their country’s future is in their hands. They will choose their path in full sovereignty,” he wrote. "This is the chance to bring their war to an end as well.”

But the Taliban face what could be a series of major crises as they fully take over the government. The majority of the billions of dollars Afghanistan holds in foreign reserves is now frozen in America, pressuring its now-depreciating Afghani currency. Banks have implemented withdrawal controls, fearing runs on their deposits in uncertainty. Civil servants across the country say they have not received their salary in months. Medical equipment remains in short supply, while thousands who fled the Taliban's advance remain living in squalid conditions. A major drought also has cut into the country's food supplies, making its imports even more important and raising the risk of people going hungry.

During the evacuation, U.S. forces helped evacuate over 120,000 U.S. citizens, foreigners and Afghans, according to the White House, making it the largest airlift in the history of the American military. Coalition forces also evacuated their citizens and Afghans. But for all who got out, foreign nations and the U.S. acknowledged they did not evacuate all who wanted to go.

At the airport's eastern gate, a handful of Afghans still tried their luck to get in, hoping for any flight. As of now, however, commercial airlines are not flying into the airport and it remains unclear who will take over managing the country's airspace. On their way out, the U.S. military warned pilots the airport was "uncontrolled” and "no air traffic control or airport service are available."

Several of those trying to come into the airport came from Kandahar province, the Taliban heartland in southern Afghanistan that saw some of the war's fiercest fighting. One of the men, Hekmatullah, who like many Afghans goes by one name, carried paperwork he said showed he worked as a translator. Hekmatullah said he had waited four days for an opportunity to leave. "But now I don’t know what chances I have,” he said. Many Afghans are terrified of a repeat of the Taliban's initial rule from 1996-2001, which was infamous for their treatment of girls and women, as well as a brutal justice system.

Western allies have voiced heartbreak in recent days that not all Afghans who wanted to flee could get on the evacuation flights. The U.N. Security Council adopted a resolution Monday, requiring the Taliban to honor a commitment to let people freely leave Afghanistan in the days ahead, and to grant access to the U.N. and other aid agencies. But they did not agree to call for the creation of a "safe zone" in Kabul, as envisaged by French President Emmanuel Macron.

President Joe Biden, in a statement, defended his decision to stick to a Tuesday deadline for withdrawing U.S. forces. He said the world would hold the Taliban to their commitment to allow safe passage for those who want to leave Afghanistan.

"Now, our 20-year military presence in Afghanistan has ended," said Biden, who thanked the U.S. military for carrying out the dangerous evacuation. He plans to address the American people on Tuesday afternoon.

The president has drawn heavy criticism from Republicans and some of his fellow Democrats for his handling of Afghanistan since the Taliban took over Kabul earlier this month after a lightning advance and the collapse of the U.S.-backed government.

Sen. Ben Sasse, a Republican member of the Senate Intelligence Committee, called the U.S. withdrawal a "national disgrace” that was "the direct result of President Biden’s cowardice and incompetence.”

But Democratic Sen. Sheldon Whitehouse tweeted: "Bravo to our diplomats, military, and intelligence agencies. An airlift of 120,000 people in that dangerous and tumultuous situation is something no one else could do."

Blinken said the United States was prepared to work with the new Taliban government if it does not carry out reprisals against opponents in the country.

The Taliban must revive a war-shattered economy without being able to count on the billions of dollars in foreign aid that flowed to the previous ruling elite and fed systemic corruption.

The population outside the cities is facing what U.N. officials have called a catastrophic humanitarian situation drought. A Taliban official in Kabul said the group wants to get rid of all foreign influences.

"Our culture has become toxic, we see Russian and American influence everywhere, even in the food we eat. That is something people should realize and make necessary changes. This will take time but will happen,” he said to Agence France-Presse (AFP).