Thousands in US protest against Israeli strikes on Gaza Strip 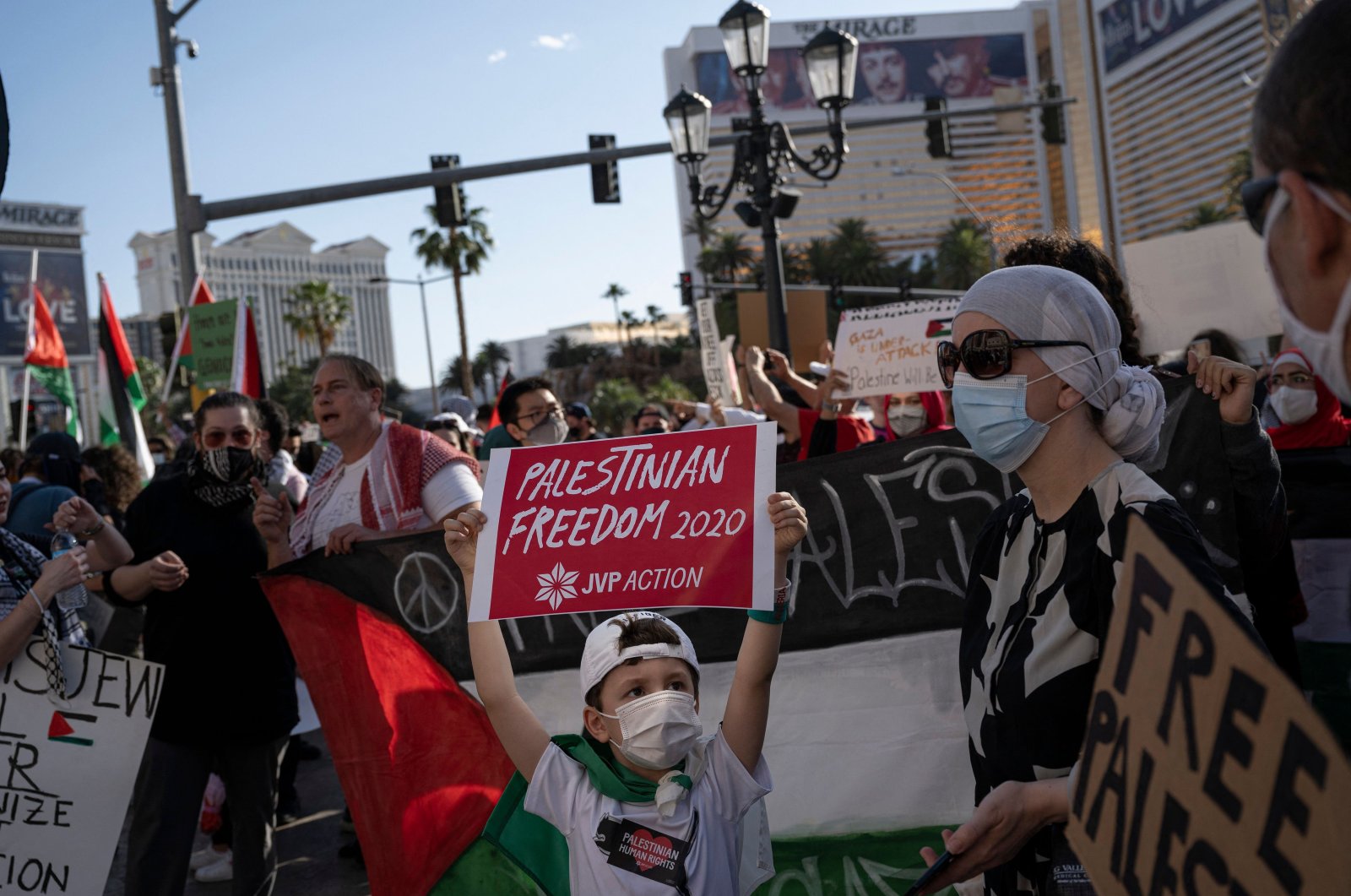 A child holds up a sign that reads "Palestinian Freedom" as pro-Palestine protesters rally outside The Venetian hotel and casino in Las Vegas, U.S., May 15, 2021. (AFP Photo)
by Associated Press
May 16, 2021 9:23 am

Pro-Palestinian protesters took to the streets of Los Angeles, New York, Boston, Philadelphia, Atlanta and other U.S. cities on Saturday to demand an end to Israeli airstrikes over the Gaza Strip.

Thousands of people shut down traffic on a major thoroughfare in west Los Angeles as they marched two miles from outside the federal building to the Israeli consulate. The protesters waved signs that said “free Palestine” and shouted “long live intifada,” or uprising.

A protest that started in a neighborhood in the Bay Ridge neighborhood of Brooklyn, New York, which has a large Arabic-speaking community, continued through the streets for several hours on Saturday afternoon. Footage on social media showed people had climbed up the poles of street lights to wave flags while others set off fireworks. As the sun set, some protesters walked onto the Interstate 278 shutting down traffic in at least on one direction, according to a video posted online.

The marches coincided with Nakba Day, which commemorate the 1948 displacement of hundreds of thousands of Palestinians amid Israel’s declaration of independence.

In Atlanta, hundreds of pro-Palestinian demonstrators, including grandparents, teenagers, mothers and fathers with youngsters in tow, assembled downtown to wave signs and chant slogans, the Atlanta Journal Constitution reported.

One sign read, “We can’t breathe since 1948” – a nod to the racial injustice and police brutality protests in the U.S. during the past year in the wake of George Floyd’s death in police custody after he couldn’t breathe, the newspaper reported.

In San Francisco, a raucous crowd banged drums and yelled “Palestine will be free” as they marched across the Mission district to Dolores Park.

A similar scene played out in Boston as protesters walked a short distance from Copley Square to the Israeli Consulate for New England, blocking traffic.

Footage on social media showed protesters unfurl a banner in the colors of the Palestinian flag with the words “Free Palestine” while standing on top of the awning of the building where the consulate is located.

In Washington, thousands of protesters streamed from the Washington Monument and to the National Archives. In Philadelphia, demonstrators filled Rittenhouse Square to decry U.S. support for Israel.

At a protest in Pittsburgh, one speaker called on lawmakers to put restrictions on how Israel can spend aid from the United States.

The protests were stoked by five days of mayhem that left at least 145 Palestinians dead in Gaza and eight dead on the Israeli side. The violence reached a tipping point on Monday that came after weeks of mounting tensions and heavy-handed Israeli measures in contested Jerusalem.

Israel stepped up its assault and slammed the Gaza Strip with airstrikes Saturday, in a dramatic escalation that included bombing the home of a senior Hamas leader, killing a family of 10 in a refugee camp and destroying a building that housed the offices of The Associated Press and other media.