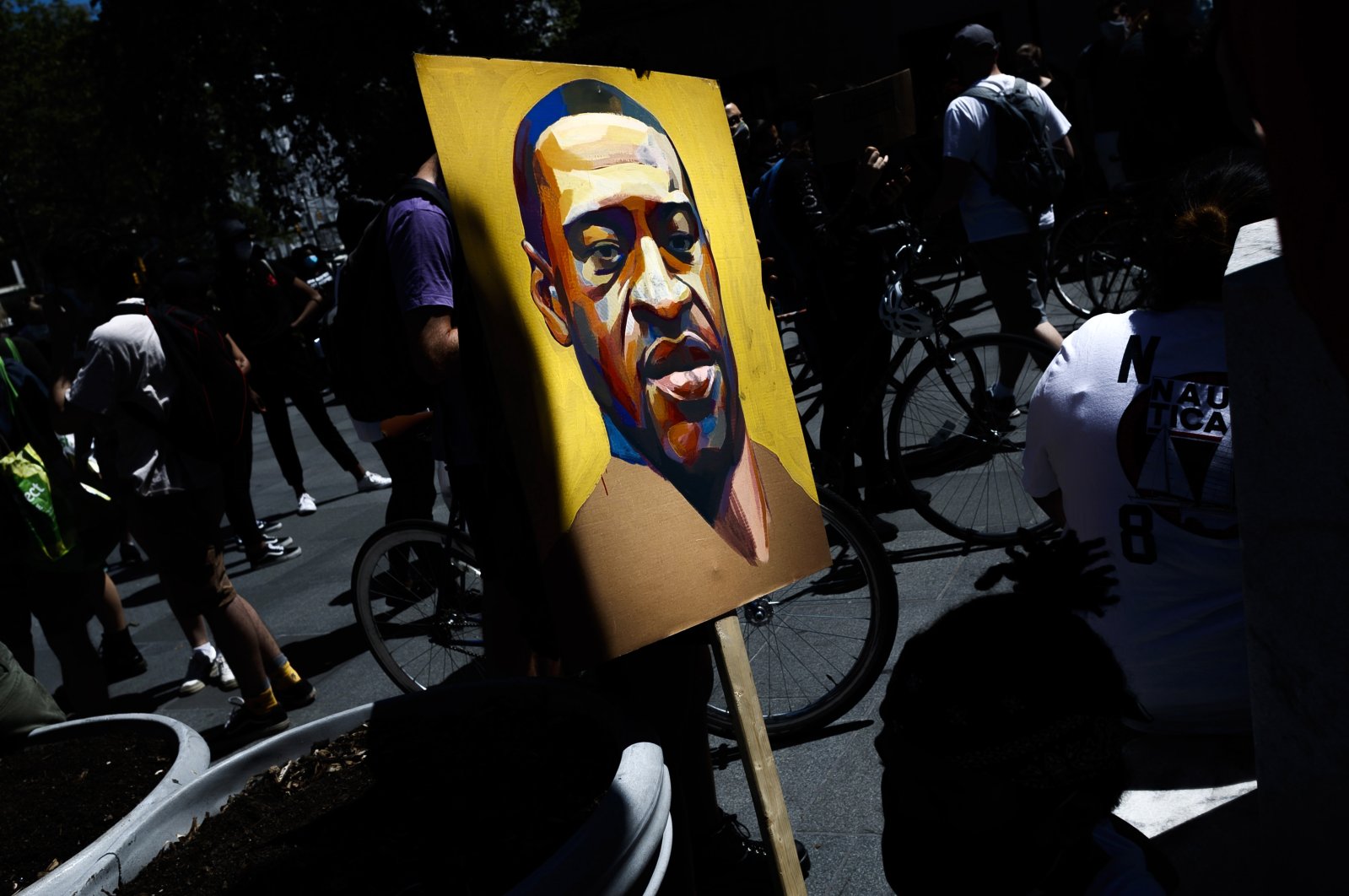 A persons holds a placard with a portrait of George Floyd at the steps of Brooklyn Borough Hall during a Black Lives Matter protest in Brooklyn, New York, U.S., June 8, 2020. (EPA Photo)
by Reuters Mar 15, 2021 8:27 pm
RECOMMENDED

The judge in the trial of Derek Chauvin, the former Minneapolis police officer charged with murder in the arrest of George Floyd, said on Monday it was unfortunate the city had announced a $27 million settlement with Floyd's family on Friday in the midst of jury selection.

Judge Peter Cahill of the Hennepin County District Court said he would soon recall the seven jurors seated last week to ask whether they had seen news of the settlement and whether it would affect their impartiality.

"I wish city officials would stop talking about this case so much," the judge said before resuming jury selection on Monday morning. "At the same time, I don't find any evil intent that they are trying to tamper with the criminal case."

The trial in a heavily fortified tower in downtown Minneapolis is being closely watched as a bellwether of the way U.S. law enforcement agencies use force and violence in policing Black people.

Chauvin, who is white, was captured in a bystander's video with his knee on Floyd's neck for nearly nine minutes as Floyd, a 46-year-old Black man in handcuffs, cried out for his life and his mother, who had recently died. The death ignited global protests against racism and police brutality. Chauvin and three other police officers were fired the day after the arrest.

Floyd's family filed a federal wrongful-death lawsuit against Chauvin and the city of Minneapolis last year. The city held a widely viewed news conference with family members on Friday to announce the $27 million settlement, described by Benjamin Crump, a lawyer for Floyd's family, as one of the largest-ever settlements of its kind.

"By my count, this is the third highly prejudicial press leak or press release that has very suspicious timing, to say the least, and has an incredible propensity to taint a jury pool," he told the court before jury selection resumed.

Besides asking to recall the seven jurors already seated, Nelson asked the judge to reconsider his request to move the trial to a different county, which Cahill said he would consider.

Prosecutors from the Minnesota attorney general's office told the court they had no control over the city's mayor, council or news media.

"You would agree that this is unfortunate, wouldn't you?" the judge asked prosecutors. "That we have this reported all over the media when we're in the midst of jury selection?"

A spokeswoman for the city said she would inquire whether Mayor Jacob Frey had any comment.

The first potential juror to appear in court on Monday, who appeared to be a white woman in her 50s, said the size of the settlement made an impression on her and that she was familiar with civil litigation from her work in human resources.

"My guess is that with that large of a settlement the city did not feel it would prevail in court," she told the judge, who went on to dismiss her.

Jurors seated last week include four white men, one of them Hispanic; one white woman; a woman of mixed race; and a Black man who immigrated to the United States about 14 years ago. All but one are in their 20s and 30s, the court said. Judge Cahill has promised the jurors anonymity for the duration of the trial.

An eighth juror was picked later on Monday: a Black man in his 30s who has worked in the banking industry and said he likes writing poetry and coaching and watching sports.

He said he strongly supported the message of the Black Lives Matter movement, and that he was able to be impartial in weighing Chauvin's conduct.

"I don't think he had any intention of harming anyone," he said of Chauvin, "but somebody did die."

All potential jurors who have appeared so far said they know who Chauvin is and what the video shows him doing; most said they had formed a negative opinion of him, though some said they could remain open to the possibility his actions were not criminal.

The court is planning to have opening arguments commence on March 29. Chauvin faces up to 40 years in prison if convicted on the most serious charge.