Trump bans all flights from Europe to US for 30 days, Turkey, UK exempt 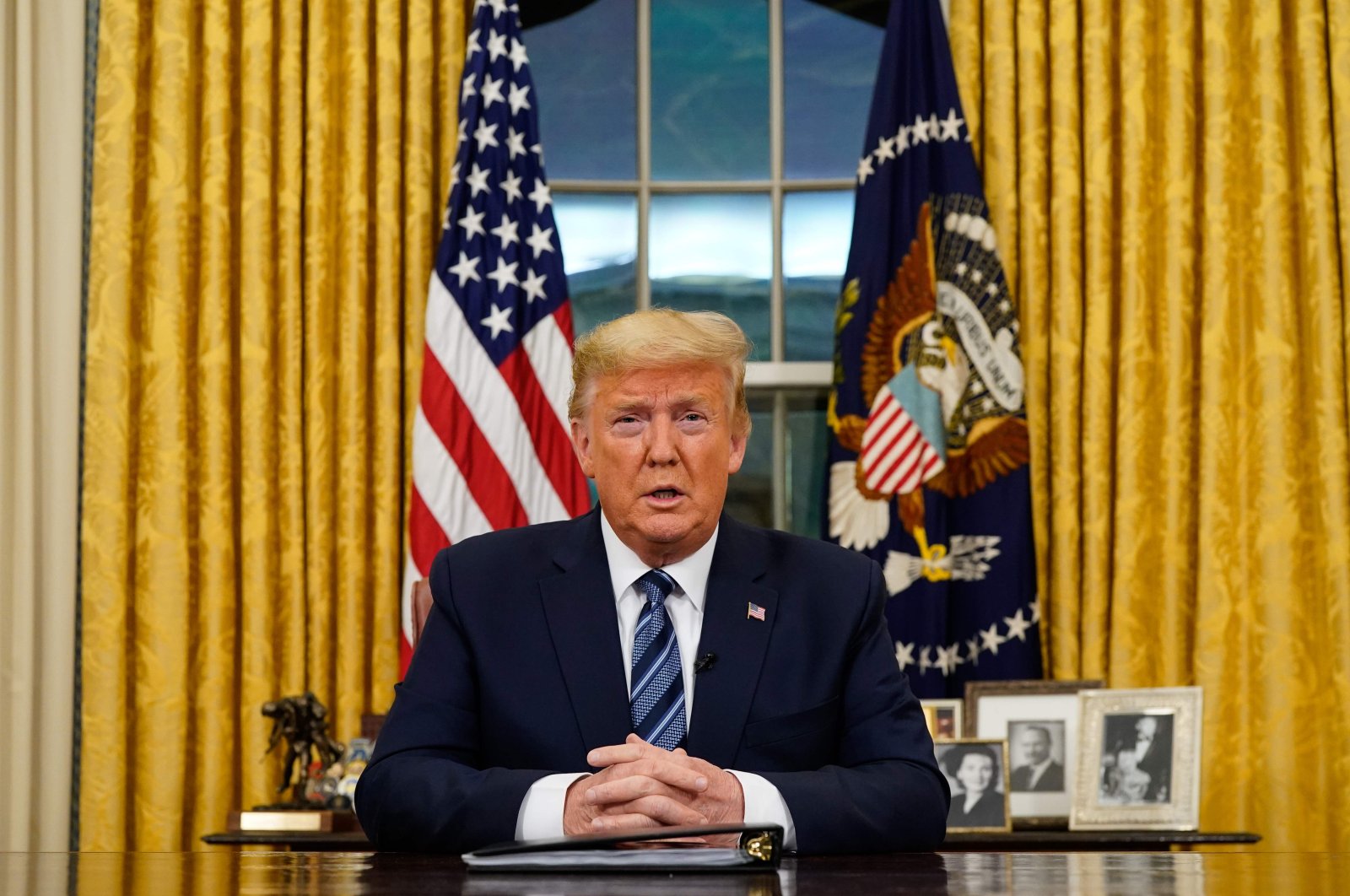 Trump shut down travel to the US from Europe but exempted Turkey, Britain and Ireland, while blaming EU authorities for failing to act quickly to contain the coronavirus pandemic

U.S. President Donald Trump announced extraordinary measures in his address to the nation from the Oval Office: a unilateral suspension of all flights from Europe to the U.S., and a likely ban on goods and cargo from Europe. However, Turkey, the U.K. and Ireland were exempted from the flight ban.

The ban targets 26 European countries that comprise a visa-free travel zone known as the Schengen Area. U.S. citizens, green card holders and the spouses or parents of either category are exempted.

As Europeans are facing the prospect of being stuck where they are for the foreseeable future, European officials reacted with surprise and anger, fearing that Trump's move would wound economies already reeling from the coronavirus pandemic.  European leaders argue that their scientific advice suggests travel restrictions are ineffective when the virus is already present almost worldwide and lamented that they had not been consulted.

"The coronavirus is a global crisis, not limited to any continent, and it requires cooperation rather than unilateral action," EU chiefs Ursula von der Leyen and Charles Michel said.

"The European Union disapproves of the fact that the U.S. decision to impose a travel ban was taken unilaterally and without consultation," the presidents of the European Commission and European Council said.

"The European Union is taking strong action to limit the spread of the virus," they insisted.

The World Health Organization (WHO) describes the novel coronavirus outbreak as a "controllable pandemic" and European countries, working with the EU, are scrambling to coordinate a response. But the 27 EU members are not all suffering to the same degree and their responses have differed, with some imposing or advising draconian lockdowns and others, caution.

Every country in the EU has now recorded at least one coronavirus COVID-19 case and the continent as a whole has had 22,969 cases, most notably Italy with 12,462 cases and 827 fatalities. In the U.S., the death toll from the new coronavirus has risen to at least 37 deaths. Seattle's King County reported four new deaths Wednesday. Three were residents of Life Care Center in suburban Kirkland, where most of Washington state's deaths have occurred. Of the 37 known deaths in the U.S., 29 are in Washington state. The governor on Wednesday also banned all events and gatherings of more than 250 people in Seattle's metro area. The Seattle Public Schools system also will close. Los Angeles County, the nation's most populous county, reported its first death Wednesday and San Francisco banned gatherings of 1,000 or more people.

Trump’s trans-Atlantic travel ban came after Italy, the worst-affected country in Europe, enacted the most severe restrictions on a Western nation since World War II. In Italy, one of the world's hardest-hit countries, people woke up to yet further virus-containment restrictions on Thursday. Prime Minister Giuseppe Conte ordered restaurants, cafes and retail shops to close after imposing a nationwide lockdown on personal movement. Jewelry and clothing shops that on Tuesday and Wednesday had posted signs urging customers to queue up out the door 1 meter (3.3 feet) apart were closed until further notice. Supermarkets, pharmacies and outdoor markets were still open and supermarkets in particular had hourslong lines of customers queued up waiting to go inside a few at a time. Many of the customers were actually working for food delivery services, which have seen such a huge spike in demand that some have stopped taking new orders.

Several European countries have imposed similar if less sweeping measures. Ireland joined the growing list of countries shutting down their school systems, and Europe's most successful soccer team, Real Madrid, put all its players into quarantine after one tested positive.

Slovenia plans to close all schools and kindergartens from Monday in order to prevent the spread of the coronavirus, Prime Minister Marjan Sarec said Thursday. He also told a news conference that Slovenia would start rejecting cargo traffic from Italy, although he gave no further details. "I call upon all citizens to follow the situation and stay home if possible," said Sarec. Slovenia confirmed 82 cases of coronavirus on Thursday, up from 57 on Wednesday. The first two elementary schools were closed on Wednesday because at least one teacher in each school tested positive.

Denmark, which has 514 confirmed cases of the virus, on Thursday entered a virtual lockdown. All schools – public and private – and daycare facilities will be closed from Monday, but many students are staying home already. Schools offered to take care of children but said there would be little teaching. All public servants who do not perform critical functions have been ordered to stay home for the next two weeks. Hospitals and nursing homes have been urged to impose tighter restrictions on visits. All indoor cultural institutions, libraries and leisure facilities are closed.

Austria reported its first coronavirus death as the number of infections rises to 302 on Thursday, 100 more than on the previous day. The authority also banned visits to patients in hospitals and postpones as many surgeries as possible – the latest public health measures that also include the closure of all Austrian schools, universities, theatres and museums.