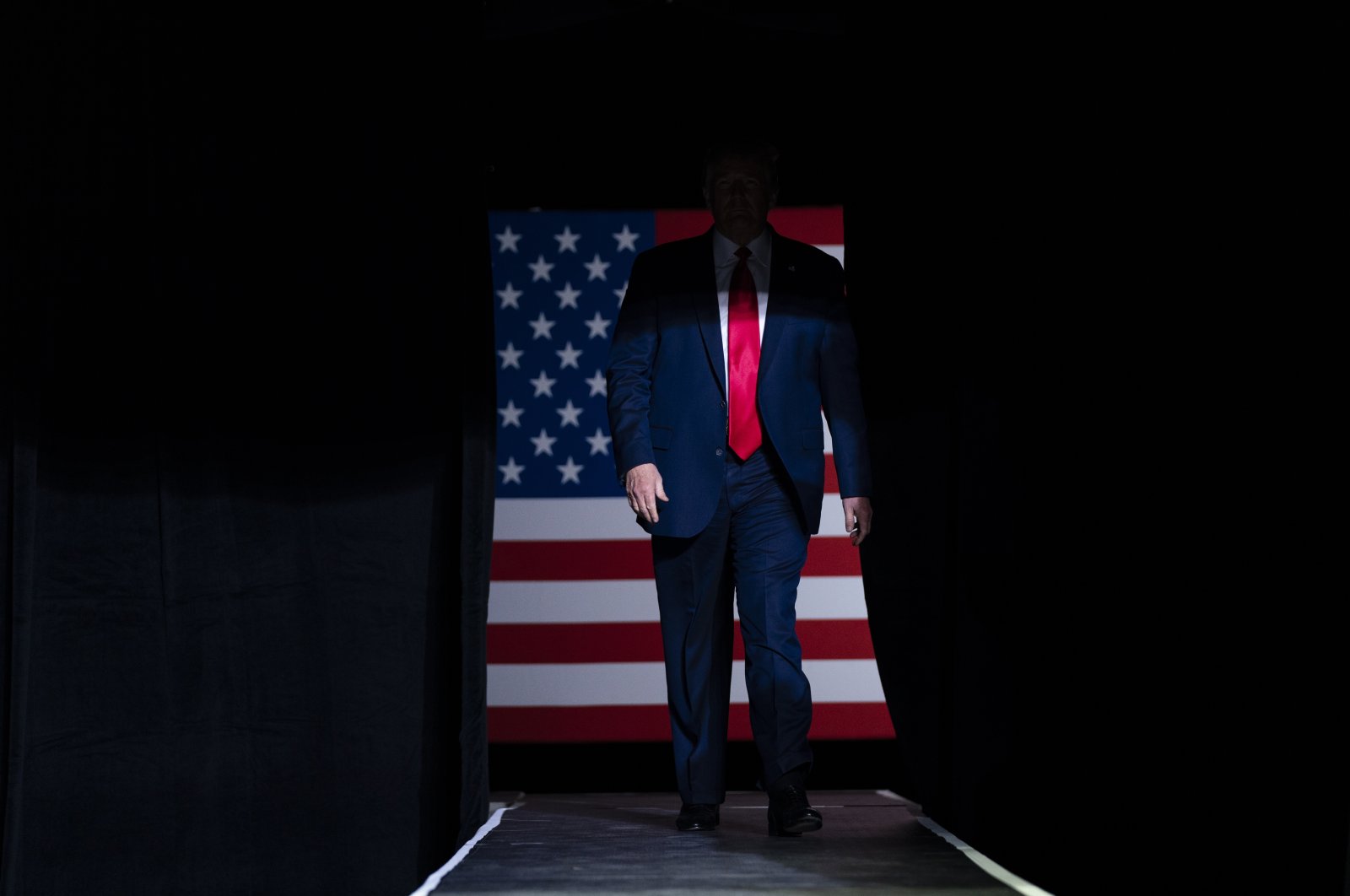 As the presidential heat between Trump and Biden ramps up, sides exchange accusations. Recent racial tensions in Wisconsin only added more fire to the debate, prompting Biden to go on a defensive against the president’s accusations

U.S. President Donald Trump claimed his election rival, Democratic nominee Joe Biden, is controlled by unnamed people who lurk in the shadows, as the incumbent argued his opponent in the race for the White House would not be able to calm unrest.

"He's a weak person, he's been weak all his life ... He should not be running for president," Trump said in a sharp verbal attack on Biden in an interview on Fox News Monday night.

Trump said he did not want to discuss his rival, claiming Biden was being manipulated by other forces, in what seemed like a riff on his long-running allegation that the Democrat, historically a moderate, is a tool of so-called radical socialists in the party.

Instead, Trump intimated a conspiratorial link. "People you've never heard of. People that are in the dark shadows," he said when asked who was pulling Biden's strings.

Trump’s comments came a day after the former vice president assailed him over the deadly protests that have sprung up on his watch.

Biden, in his most direct attacks yet, accused Trump earlier Monday of causing the divisions that have ignited the violence. He delivered an uncharacteristically blistering speech in Pittsburgh and distanced himself from radical forces involved in altercations.

Biden said of Trump: "He doesn’t want to shed light, he wants to generate heat, and he’s stoking violence in our cities. He can’t stop the violence because for years he’s fomented it."

Trump, for his part, reiterated that he blames radical troublemakers stirred up and backed by Biden.

When he was asked about one of his own supporters who was charged with killing two men during the mayhem in Wisconsin’s Kenosha, Trump declined to denounce the killings and suggested that the 17-year-old suspect, Kyle Rittenhouse, was acting in self-defense.

Kenosha has been riven by protests since the Aug. 23 shooting of Jacob Blake, a black man, seven times in the back by police.

"That was an interesting situation. You saw the same tape as I saw, and he was trying to get away from them, I guess, it looks like, and he fell and then they very violently attacked him and it was something we're looking at right now and it's under investigation," Trump said. "I guess he was in very big trouble. He probably would have been killed," he added.

Rittenhouse, who reportedly supports the pro-police movement Blue Lives Matter, has been charged with two counts of homicide and one count of attempted homicide after shooting three protesters in Kenosha, Wisconsin on Aug. 25, killing two of them.

Rittenhouse's defense attorneys have said he acted in self-defense, but a complaint filed by Kenosha County prosecutors said he opened fire on unarmed demonstrators.

His arrest came after an individual who may have shot one or all of the victims appeared on cellphone footage that widely circulated on social media.

In it, three gunshots are heard as a young white male with a long barrel rifle runs away from the scene while saying on his cellphone, "I just killed somebody."

A person wearing the same blue pants and green shirt is seen in a separate bystander video being chased by protesters before tripping and opening fire on protesters as they futilely attempt to take away his weapon.

He then gets up and walks away as screams of "medic" are heard in the background before he makes his way to police amid shouts of, "Hey, he just shot them." Police, however, did not take him into custody.

Rittenhouse was arrested the following day in neighboring Illinois.

Shortly after the president concluded his remarks at a news conference, Biden slammed Trump for declining "to rebuke violence."

"He wouldn't even repudiate one of his supporters who is charged with murder. He is too weak, too scared of the hatred he has stirred to put an end to it," Biden said on Twitter. "I urge President Trump to join me in saying that while peaceful protest is an important right – violence is wrong. Period. If he can't say that, then he is unfit to be President."

During the press briefing, Trump announced that he is not planning on canceling his visit to Kenosha on Tuesday, ignoring Wisconsin Gov. Tony Evers, who in a Sunday letter urged Trump to cancel the trip, saying the president's presence "will only delay our work to overcome division and move forward together."

Trump also said he would not meet Blake's family during his visit to Wisconsin because it would be "inappropriate" to speak with the family's lawyers.

Trump is scheduled to meet with law enforcement and business owners in Kenosha.

Trump went on to talk about people who are "controlling the streets," and other "thugs" taking flights wearing "black uniforms with gear."

Trump and his campaign team have seized upon the unrest in Kenosha, as well as in Portland, Oregon, where a Trump supporter was shot and killed, leaning hard into a defense of law and order while suggesting that Biden is beholden to extremists. Trump aides believe that a tough-on-crime stance will help him with voters and that the more the national discourse is about anything other than the coronavirus, the better it is for the president.

In the interview with Fox, Trump insisted that if he were not president, "you would have riots like you’ve never seen."

Biden on defensive against Trump’s criticism

Meanwhile, in Pittsburgh, Biden was busy addressing a key Trump critique, condemning violent protesters and calling for their prosecution.

"It’s lawlessness, plain and simple. And those who do it should be prosecuted," Biden said. He leaned on his own 47-year career in politics to defend himself against Republican attacks.

"You know me. You know my heart. You know my story, my family’s story," he said. "Ask yourself: Do I look like a radical socialist with a soft spot for rioters? Really?"

The former vice president also tried to refocus the race on what has been its defining them – Trump’s handling of the coronavirus pandemic that has left more than 180,000 Americans dead – after a multiday onslaught by the president’s team to make the campaign about the violence rattling American cities.

Worried Democrats, including some inside his own campaign, have pushed Biden to deal with the violence head-on and at greater length, though he had previously condemned it. With Trump pounding the issue in his convention speech, which was then followed by more bloodshed over the weekend, many in Biden’s party, still shell-shocked by the 2016 loss, urged Biden to get ahead of the rare issue that has broken through the national focus on the pandemic.

Biden declared that even as Trump is "trying to scare America," what’s really causing the nation’s fear is Trump's own failures.