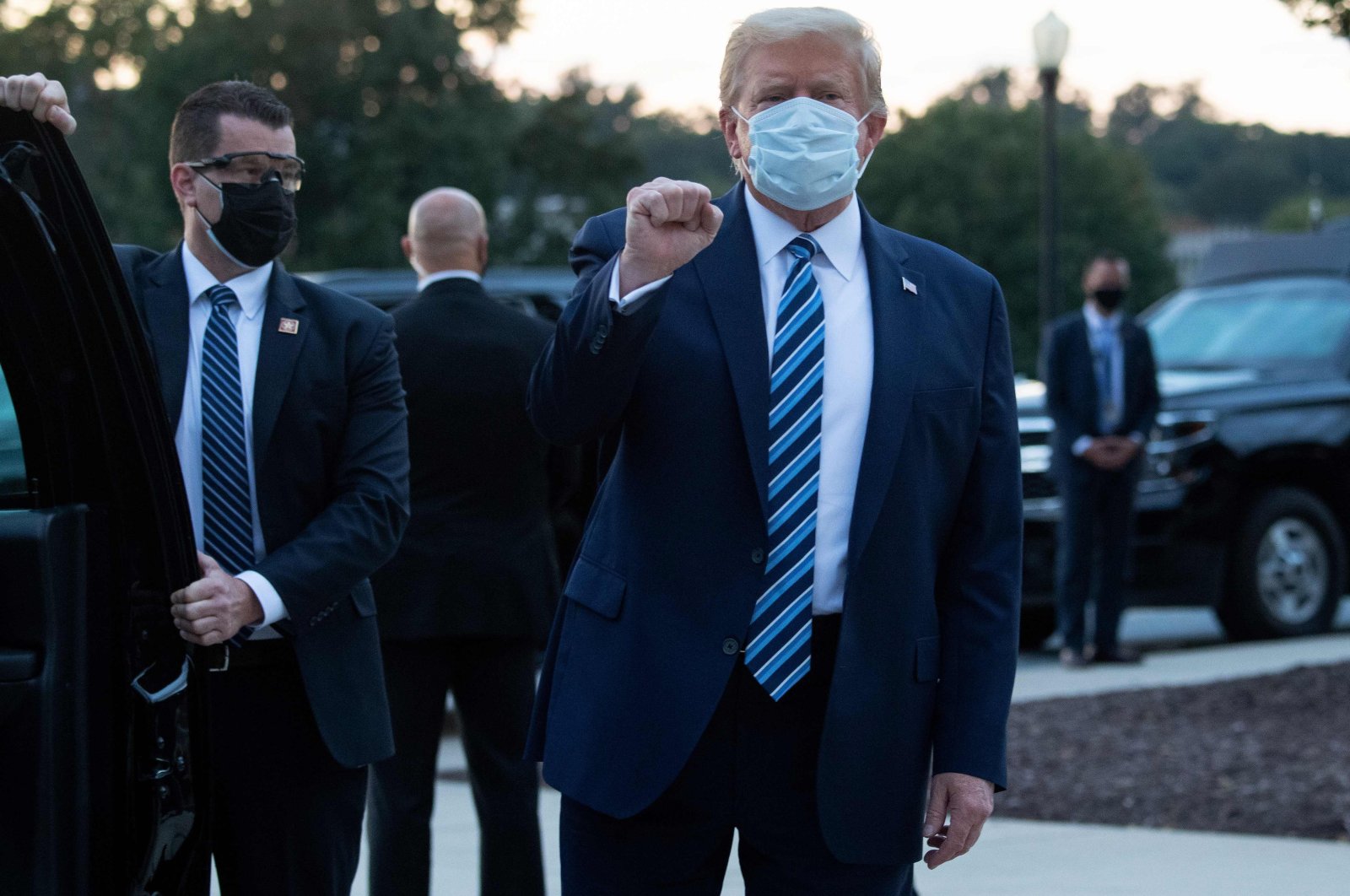 U.S. President Donald Trump pumps his fist as he leaves Walter Reed National Military Medical Center in Bethesda, Maryland, U.S., heading toward Marine One, to return to the White House after being discharged following treatment for COVID-19, Oct. 5, 2020. (AFP Photo)
by Agencies Oct 09, 2020 10:00 am
RECOMMENDED

U.S. President Donald Trump said Thursday he is hoping to hold a campaign rally on Saturday, as his doctor said the president had ”completed his course of therapy" for COVID-19.

Trump's comments came during a phone interview with Fox Business in the evening, where his raspy voice was repeatedly punctuated by coughs.

"I think I'm the most analyzed human being in the world right now," Trump said, adding that he will "probably" be tested for the coronavirus on Friday.

Trump insisted that he feels “perfect” one week after his diagnosis with the coronavirus that has killed more than 210,000 Americans.

The president has not been seen in public – other than in White House-produced videos – since his Monday return from the military hospital where he received experimental treatments for the virus. On Thursday, his physician, Navy Cmdr. Sean Conley, said in a memo that Trump would be able to safely “return to public engagements” on Saturday, as the president tries to shift his focus to the election that's less than four weeks away, with millions of Americans already casting ballots.

The Centers for Disease Control and Prevention (CDC) says individuals can discontinue isolation 10 days after the onset of symptoms, which for Trump was Oct. 1, according to his doctors. Conley said that meant Trump, who has been surrounded by minimal staffing as he works out of the White House residence and the Oval Office, could return to holding events on Saturday.

He added that Trump was showing no evidence of his illness progressing or adverse reactions to the aggressive course of therapy prescribed by his doctors.

Earlier this week, the president’s doctors suggested they would work closely with military medical research facilities and other laboratories on “advanced diagnostic testing” to determine when the president was no longer contagious but did not elaborate.

“So, if the president goes 10 days without symptoms, and they do the tests that we were talking about, then you could make the assumption, based on good science, that he is not infected,” Fauci said Thursday on MSNBC.

While reports of reinfection are rare, the CDC recommends that even people who recover from COVID-19 continue to wear a mask, stay distanced and follow other precautions. It was unclear if Trump, who eschewed mask-wearing in most settings, would abide by that guidance.

The White House, meanwhile, continued to decline to share when Trump last tested negative for the virus – which would help pinpoint when he was infected. Strategic communications director Alyssa Farah said that information was Trump's “private medical history.”

Trump's campaign and the White House were already drawing up plans for Trump to resume campaigning, eyeing a visit to Pennsylvania on Monday and Michigan on Tuesday ahead of what was to have been next Thursday's debate.

But the Commission on Presidential Debates announced that event would be held “virtually” in order to “protect the health and safety of all involved.” Trump swiftly rejected that offer, and his campaign later called on the commission to delay the final two debates by a week to alleviate concerns about an in-person contest.

Over the objections of some aides, Trump returned to the Oval Office on Thursday, even though a workspace had been set up in the residential section of the White House. Aides were discussing a potential photo opportunity with the president at the White House either Thursday or Friday but plans had not been finalized, according to two White House officials not authorized to publicly discuss internal deliberations. Only a few senior aides, medical staff and security personnel have laid eyes on the president since he returned to the White House on Monday afternoon.

Trump also released a video Thursday morning, filmed a day earlier, directly addressing the nation's seniors – a critical demographic for his campaign that is also at greatest risk of poor outcomes from the virus – saying, “I want you to get the same care that I got."

On Thursday, Trump continued to credit an experimental drug for the seemingly quick pace of his recovery. He called his diagnosis a “blessing in disguise” in the nation’s battle against the pandemic.

Seemingly sensitive to the fact that his treatment course has been far more comprehensive than the care received by average Americans, he promised to swiftly get the drug approved for broader use – and distribute it for free – even though he does not have the power to order that himself.

Trump received an experimental antibody drug made by Regeneron through a “compassionate use” exemption, a recognition of the above-and-beyond standard of care he receives as president. The safety and effectiveness of the drug have not yet been proven. And there is no way for the president or his doctors to know that the drug had any effect. Most people recover from COVID-19.

“I had tremendous luck with this Regeneron,” Trump said during the interview.

Dr. Conley, the White House physician, said in a memo Wednesday that Trump had been symptom-free for over 24 hours, and that his oxygen saturation level and respiratory rate were normal.

Trump speculated that he caught the virus either at the Sept. 26 Rose Garden event announcing his new Supreme Court nominee or at a meeting with military families the following day. He said family members often want to get up close to him and “kiss” and “hug” him.