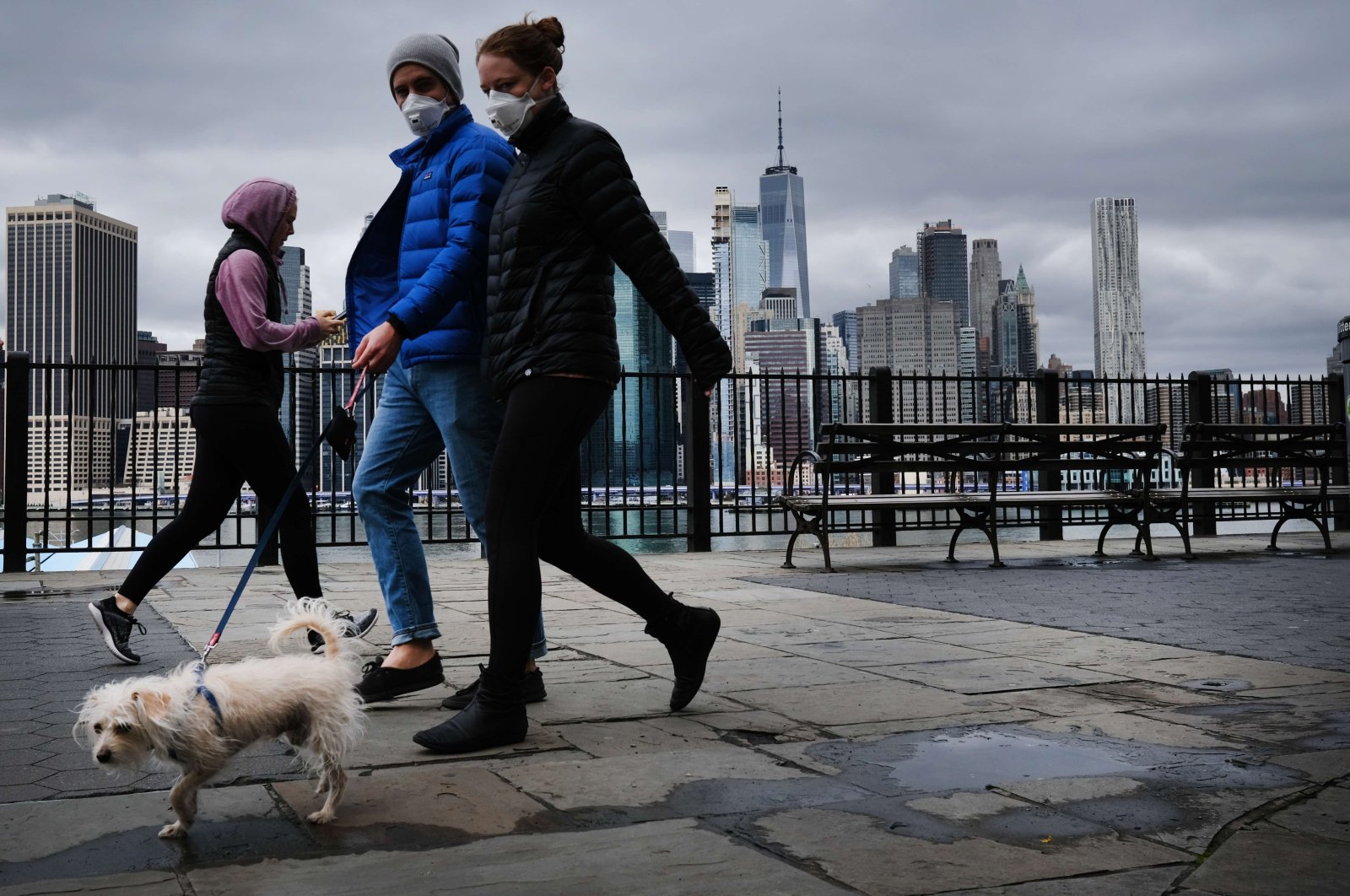 The Manhattan skyline stands in the distance as people try to get some time outside in Brooklyn, New York City, on Saturday, April 4, 2020. (AFP Photo)
by Compiled from Wire Services Apr 04, 2020 11:16 pm

The U.S. saw a record number of victims for a single day Saturday as the coronavirus continues to radiate throughout country, as Europe continues to lead in total number of fatalities. Over 3 billion people around the globe are projected to be under obligatory or self-imposed lockdown

Deaths from COVID-19 reached a record 1,344 in the U.S. on Saturday as the nationwide total of confirmed infections and deaths topped 300,000 and 8,500 respectively, Johns Hopkins University reported Sunday.

The Baltimore, Maryland-based university, which has been keeping a running tally of global coronavirus numbers, said there are at least 300,915 confirmed virus cases in the U.S., and there have been 8,503 deaths.

Meanwhile, global deaths from the COVID-19 pandemic have soared past 60,000, with Europe continuing to bear the brunt of the virus which has left roughly half the planet confined at home.

U.S. President Donald Trump said Saturday that the country was heading into what could be its "toughest” weeks as COVID-19 cases swell nationwide. He warned states not to inflate their needs for critical medical equipment. Trump warned Americans to brace for a "very horrendous" number of coronavirus-related deaths in the coming days, ahead of a rare speech by Queen Elizabeth II on Sunday aimed at rallying hard-hit Britain.

"There will be a lot of death, unfortunately. There will be death,” Trump said in a somber start to his daily briefing on the pandemic.

Trump said the goal was to stay several days ahead of critical medical needs in each state. But he also suggested that states were asking for more medical supplies than they really needed.

"The fears of the shortages have led to inflated requests,” Trump said.

Trump said the U.S. was entering "a time that's going to be very horrendous" with "some really bad numbers."

"This will probably be the toughest week," he said at the White House.

At the same time, the president stressed the U.S. cannot remain shut down forever.

"Mitigation does work, but again, we're not going to destroy our country," he said. "I've said it from the beginning – the cure cannot be worse than the problem."

Louisiana officials have said New Orleans is on track to run out of ventilators by next week. Gov. Andrew Cuomo, D-New York, whose state is at the epicenter of the national epidemic, has pleaded for ventilators for days and lambasted what he has said is insufficient help from the federal government. The state's coronavirus death toll jumped by 594 to 4,159, as cases surged to 122,031 with 8,327 new infections in past 24 hours, Cuomo said. New York is poised to get more than 1,100 ventilators from China and Oregon.

Trump also revisited a familiar message, saying he wants to get the economy up and running as soon as possible. At one point during the unfolding outbreak, Trump said he had hoped to open up businesses by Easter, April 12. He later acknowledged that was not possible, ceding the month of April after seeing rising death toll projections.

"We have to vanquish the virus as quickly as we can... We have to get back to work,” he said.

New York state saw a record 630 deaths in a single day, and Cuomo warned the worst was yet to come. The state has recorded a total of 3,565 deaths.

Cuomo also cautioned that already strained hospitals were not prepared.

"Anyone who's not already in this fight, we need you," New York City Mayor Bill de Blasio said.

Trump said 1,000 military personnel, mostly doctors and nurses, would be deployed to help in the city, which he described as "the hottest of all the hot spots."

Much of the country is under orders to stay home.

Over 45,000 global deaths have been in Europe, with Britain reporting a new daily high in fatalities, taking the overall toll to 4,300 out of nearly 42,000 cases.

Queen Elizabeth II was scheduled to make a rare, "deeply personal" speech on Sunday, urging people to rise to the challenge posed by the coronavirus, and personally thanking frontline health care workers.

"I hope in the years to come everyone will be able to take pride in how they responded to this challenge," she will say, according to extracts released Saturday.

U.K. deaths from the coronavirus could rise to between about 7,000 and 20,000 under measures taken to slow the spread of the virus, Neil Ferguson, a professor at Imperial College in London who has helped shape the government's response, said Sunday.

"We had an exponentially growing curve of infections which we interrupted at a certain time," the epidemiologist told the BBC's Andrew Marr program.

"We don't have the ability right now to measure how many people have been infected; that will come with antibody tests, and so we are making statistical estimates of that, and those are subject to a certain degree of uncertainty.

The pandemic has hammered the global economy, with businesses hit hard as people are forced to stay indoors to help curb the spread of the virus.

Governments have rolled out massive, unprecedented stimulus programs to ease the pain, but economists have warned that the crisis could worsen poverty levels with millions of jobs lost.

Poor economies, such as Iraq, are struggling, with charities and volunteers rallying to provide food to the needy.

"This is more dangerous than Daesh," said Iraqi volunteer Mustafa Issa, referring to the terrorist group that swept through a third of the country in 2014.

At the Vatican, Pope Francis is expected to livestream his Palm Sunday Mass. St. Peter's Square is usually packed by faithful Catholics for the occasion, but this year, it will be empty because of coronavirus containment measures.

There was, however, some encouraging news from Europe over the weekend.

Worst-hit Italy cheered after seeing its number of intensive care virus cases drop for the first time – from 4,068 on Friday to 3,994 on Saturday.

Even some of the most cautious Italian health officials seized on the figures as evidence that the tide may be turning in the deadliest disaster the country has faced since World War II.

"This is a very important data point," said civil protection service chief Angelo Borrelli, adding that it "allows our hospitals to breathe."

The daily rise in new infections across Italy has also slowed. It reported 681 new deaths Saturday, down from a peak of almost 1,000 just over a week ago.

Spain, which is under a near-total lockdown, saw a second successive daily fall in coronavirus-related deaths with 809 fatalities.

The total number of deaths in Spain now stands at 11,947, second only to Italy.

Although the number of new cases also slowed, Spanish Prime Minister Pedro Sanchez announced an extension of the country's lockdown until April 25.

At a field hospital in Madrid set up at a conference center, staff applauded whenever a patient was healthy enough to be discharged.

One of them was 59-year-old builder Eduardo Lopez who gave a "10/10" rating to the staff who cared for him "with tenderness and a great dose of humanity."

Germany's confirmed coronavirus infections rose by 5,936 in the past 24 hours to 91,714, the third straight drop in the daily rate of new cases, according to data from the government's Robert Koch Institute.
Sunday's figure amounted to a drop of 146 cases compared with 6,082 new infections recorded on Saturday, itself a fall from 6,174 new infections on Friday.

Several Western countries including the U.S., Germany and France have in recent days encouraged the use of masks in public despite earlier saying that only those known to have been exposed to the virus needed to cover their faces.

The U-turn has angered and confused some citizens and spurred a flurry of online tutorials for DIY masks.

The advice came after some studies suggested the new coronavirus can spread through speaking and breathing, not just coughing and sneezing.

The World Health Organization (WHO) is reviewing its guidance but has said it worries that masks could give "a false sense of security," leading people to be more casual about hand washing and social distancing.

For most people, the novel coronavirus causes mild or moderate symptoms, such as fever and cough that clear up in two to three weeks.

For some, especially older adults and people with existing health problems, it can cause more severe illness, including pneumonia and death.