US braces for 'hardest, saddest' week as death toll approaches 10,000 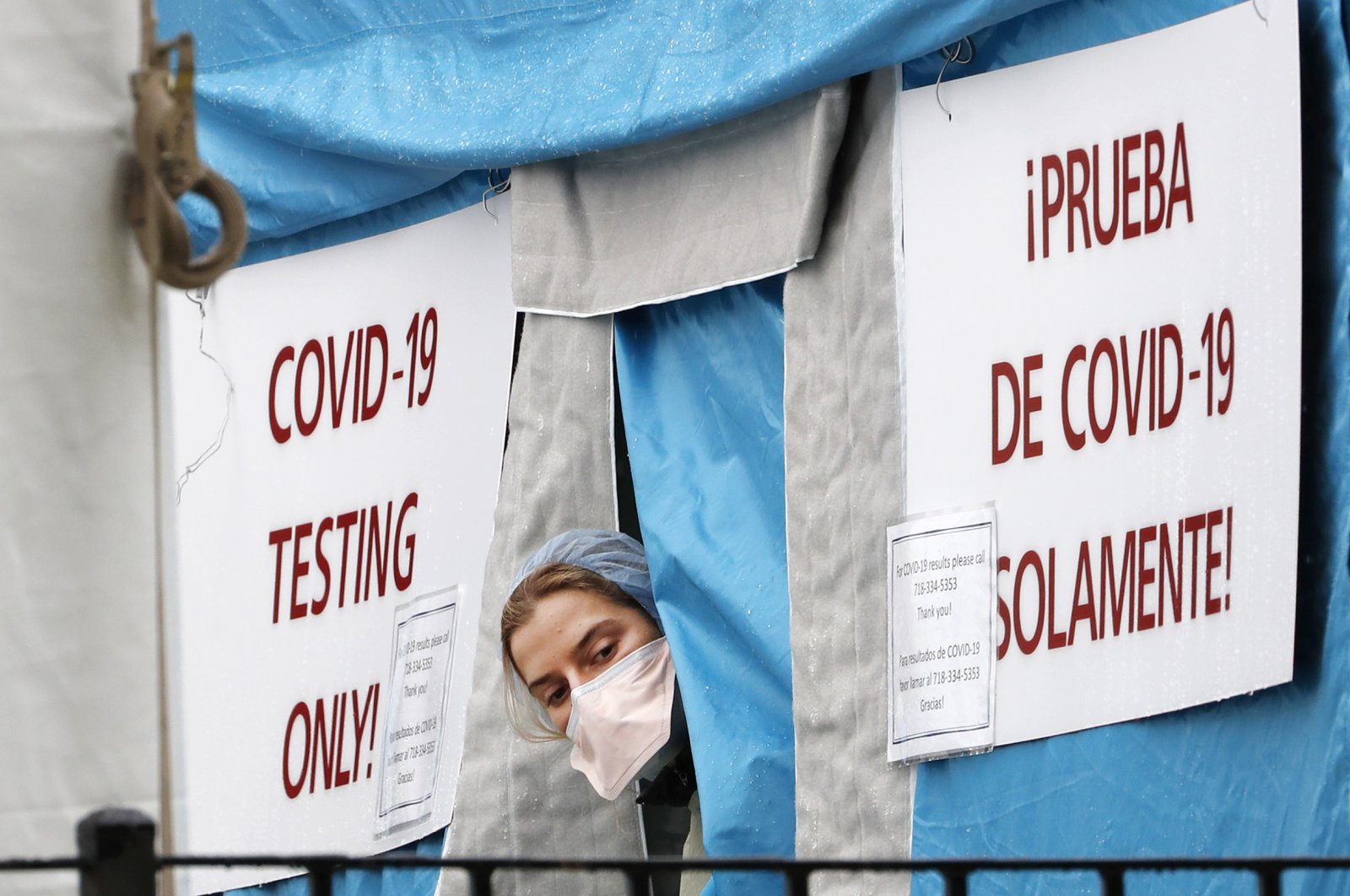 A medical worker sticks her head outside a COVID-19 testing tent set up outside Elmhurst Hospital Center in New York, Saturday, March 28, 2020. (AP Photo)
by Compiled from Wire Services
Apr 06, 2020 8:36 am

Americans braced for what the nation's top doctor warned Sunday would be “the hardest and saddest week” of their lives as 1,200 more people have died due to coronavirus in the U.S. in the past day, John Hopkins University said Sunday.

The Baltimore-based university, which has been keeping a running tally of global COVID-19 numbers, said there are at least 337,637 confirmed infections in the U.S., including with 9,647 fatalities.

Amid the dire news, there were also glimmers of hope some hard-hit areas — the number of people dying appeared to be slowing in New York City, Spain and Italy. The news was cautiously welcomed by leaders, who also noted that any gains could easily be reversed if people did not continue to adhere to strict lockdowns.

But President Donald Trump later suggested the hard weeks ahead could foretell the turning of a corner. “We’re starting to see light at the end of the tunnel,” Trump said at an evening White House briefing.

The death toll in hardest-hit New York state rose to 4,159, Gov. Andrew Cuomo said, up from 3,565 a day prior. It was the first time the daily toll had dropped but Cuomo said it was too early to tell whether that was a "blip." Images from New York showed medics in protective gear wheeling bodies on stretchers to refrigerated trailers repurposed as makeshift morgues.

Worldwide, more than 1.2 million people have been confirmed infected and nearly 70,000 have died, according to Johns Hopkins University. The true numbers are certainly much higher, due to limited testing, different ways nations count the dead and deliberate under-reporting by some governments.

The vast majority of infected people recover from the virus, which is spread by microscopic droplets from coughs or sneezes. For most people, the virus causes mild to moderate symptoms such as fever and cough. But for some, especially older adults and the infirm, it can cause pneumonia and lead to death.

The rapid spread of the virus in the U.S. has prompted a chaotic scramble for medical equipment and protective gear.

By that time, hospitals in several states were treating thousands of infected patients without adequate equipment and pleading for shipments from the national stockpile. Now that stockpile is nearly drained just as the numbers of patients requiring critical care is surging.

When asked about the issue, Trump said federal officials and the military had worked "a miracle.”

Rebekah Gee, who heads the Louisiana State University’s health care services division, warned that the private and public sector have been competing with each other, leading to price increases.

Gee said one of her colleagues went on eBay to buy gowns, while equipment her department ordered from China got stalled for weeks in Hong Kong.

“Our whole country is at war with this virus,” said Gee, who once ran the state’s Department of Health. “This needs a coordinated approach, and right now that’s not happening.”

Louisiana and the New Orleans area have been hard hit by the virus, and Gov. John Bel Edwards has repeatedly warned of looming equipment shortages.

Dr. Anthony Fauci, director of the National Institute of Allergy and Infectious Diseases, said he hoped the pace of new infections would plateau soon, but that the virus is unlikely to be eradicated this year.

Speaking on CBS's “Face the Nation,” Fauci said the prospect of a resurgence is why the U.S. is working so hard to develop a vaccine and conducting clinical trials on treatments.

Scientists are still learning about the virus that was first detected in late December in Wuhan, China. In what is believed to be the first known infection in an animal in the U.S., officials said Sunday that a tiger at the Bronx Zoo had tested positive.