US couple draws firearms on protesters outside their St. Louis home 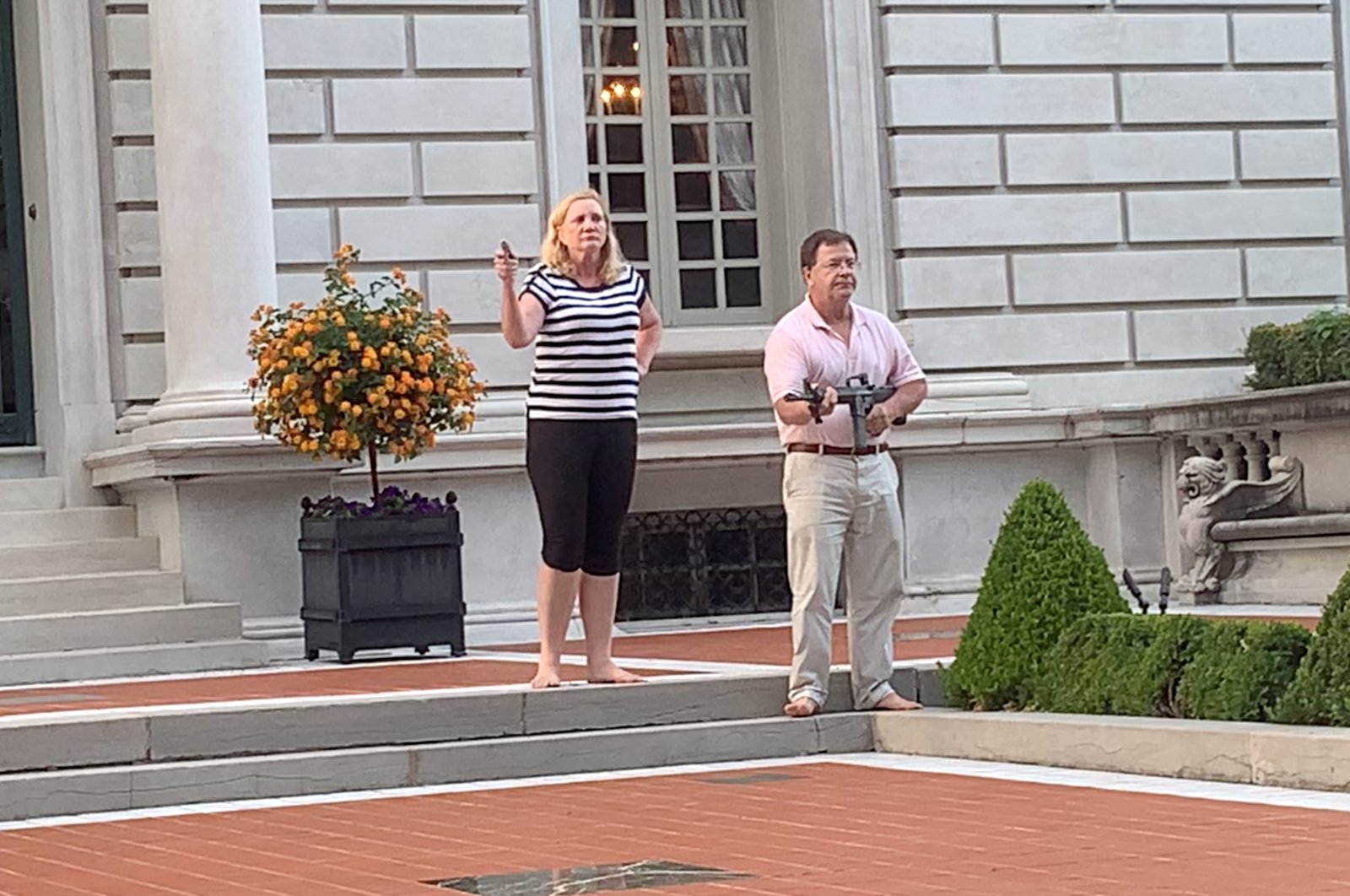 A couple draws their firearms on protestors as they enter their neighborhood during a protest against St. Louis Mayor Lyda Krewson, St. Louis, Missouri, U.S., June 28, 2020. (Reuters Photo)
by Compiled from Wire Services
Jun 29, 2020 3:56 pm

A white couple pointed guns at protesters in St. Louis as a group marched toward the mayor's home to demand her resignation after she read the names and addresses of several residents who supported defunding the police department during an online briefing.

A social media video showed the armed couple standing outside of their large home Sunday evening in the upscale Central West End neighborhood of the Missouri city.

In the video, the unidentified couple shouted at protesters, while people in the march moved the crowd forward, urging participants to ignore them. People in the crowd included Black and white protesters.

President Donald Trump retweeted news footage of the white couple in St Louis, Missouri who pointed guns at protesters marching for police reform. The president’s action came a day after he retweeted footage of protesters clashing in Florida in which a Trump supporter could be heard to say “White power! White power!” He later deleted the tweet, and the White House said the president had not heard “the one statement” on the video.

The group of at least 500 people was heading toward Mayor Lyda Krewson's home, chanting, “Resign Lyda, take the cops with you,” news outlets reported.

Resignation demands come after a Friday Facebook live briefing, where Krewson read the names and addresses of several residents who wrote letters to the mayor suggesting she defund the police department.

The video was removed from Facebook, and Krewson apologized Friday, stating she didn't "intend to cause distress."

Protesters nationwide have been pushing to “defund the police” following the death of George Floyd and other Black people killed by law enforcement. Floyd, who was in handcuffs, died May 25 after a white Minneapolis police officer pressed his knee on Floyd’s neck for nearly eight minutes.

Krewson, a white longtime alderwoman, was elected as St. Louis' first female mayor in April 2017 by pledging to work to reduce crime and improve impoverished neighborhoods. She and her two young children were in the car in front of their home in 1995 when her husband, Jeff, was slain during a random carjacking attempt.

Homicides have spiked in recent years in St. Louis, which annually ranks among the most violent cities in the nation based on FBI statistics.

An online petition calling for Krewson’s resignation had about more than 43,000 signatures as of early Monday.

“As a leader, you don’t do stuff like that ... it’s only right that we visit her at her home,” said state Rep. Rasheen Aldridge, D-St. Louis, speaking into a megaphone at the protest Sunday.