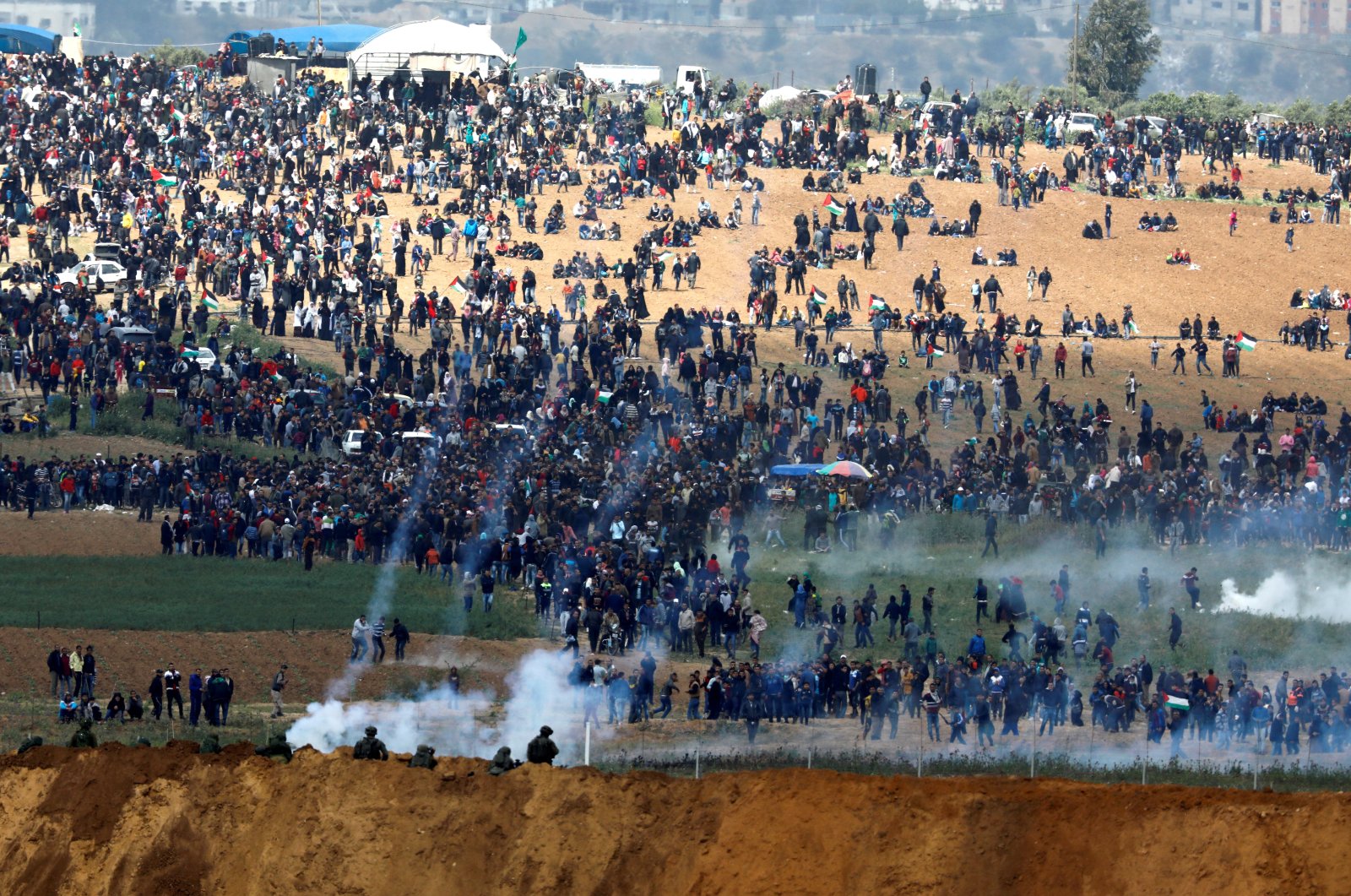 Israeli soldiers shoot tear gas from the Israeli side of the Israel-Gaza border, as Palestinians protest on the Gaza side of the border, March 30, 2018. (Reuters File Photo)
by Agencies
Mar 03, 2021 11:36 pm

The United States on Wednesday criticized the International Criminal Court (ICC) for launching an investigation into alleged war crimes in the Palestinian territories and voiced support for Israel.

"We firmly oppose and are disappointed by the ICC prosecutor's announcement of an investigation into the Palestinian situation," State Department spokesman Ned Price told reporters.

Earlier on the same day, ICC's chief prosecutor launched an investigation into Israel's crimes in the Palestinian territories, turning the tribunal’s focus toward Israeli military actions and settlement construction on lands captured in the 1967 Mideast war.

The decision dealt an embarrassing blow to the Israeli government, which had conducted an aggressive public relations and behind-the-scenes diplomatic campaign to block the investigation. It also raised the possibility of arrest warrants being issued against Israeli officials suspected of war crimes, making it potentially risky to travel abroad.

“The state of Israel is under attack this evening,” Prime Minister Benjamin Netanyahu said in a videotaped statement. “The biased international court in the Hague made a decision that is the essence of anti-Semitism and hypocrisy.”

“I promise you we will fight for the truth until we annul this scandalous decision,” he said.

The decision by Fatou Bensouda, the court’s outgoing prosecutor, had been expected since the court determined last month that she had jurisdiction over the case. A preliminary probe by Bensouda in 2019 had found a “reasonable basis” to open a war crimes case.

In a statement, Bensouda said the investigation will look into “crimes within the jurisdiction of the court that are alleged to have been committed” since June 13, 2014. She said the investigation will be conducted “independently, impartially and objectively, without fear or favor.” That task will now be handed to Karim Khan, the British lawyer who is set to become the court's chief prosecutor in June.

Wednesday's decision turns the court’s focus toward two key Israeli policies of recent years: its repeated military operations against militants in the Gaza Strip, highlighted by a devastating 2014 war, and its expansion of Jewish settlements in east Jerusalem and the occupied West Bank. Experts say that Israel could be especially vulnerable to prosecution for its settlement policies.

Although the Palestinians do not have an independent state, they were granted nonmember observer status in the U.N. General Assembly in 2012, allowing them to join international organizations like the ICC. Since joining the court in 2015, they have pushed for a war crimes probe against Israel.

Israel, which is not a member of the court, had said it does not have jurisdiction because Palestine is not a sovereign state.

The Palestinians chose June 2014 as the start of the investigation to coincide with the run-up to Israel’s devastating Gaza war that summer.

Bensouda has also said her probe would look into the actions of Hamas, which fired rockets indiscriminately into Israel during the 2014 war.

In Gaza, Hamas nonetheless welcomed the initiation of the investigation and called on Bensouda to “resist any pressure” that could scuttle the process.

“This is a step forward to implement justice, punish the occupation and do justice to the Palestinian people,” Hamas spokesman Hazem Qassem told the Associated Press. He said he was confident that the rocket attacks on Israeli cities was legitimate under international law.

The ICC is meant to serve as a court of last resort when countries’ own judicial systems are unable or unwilling to investigate and prosecute war crimes.

Israel does not recognize its authority, saying it has an independent, world-class judicial system. But the Palestinians, and human rights groups, say Israel is incapable of investigating itself and has a history of whitewashing military crimes.

After the war, the military opened dozens of investigations into the conduct of troops. Although there were only a handful of convictions on minor charges, that could be enough for the court, which dropped a similar case against British troops in Iraq last year because U.K. authorities had investigated.

In a reference to Israel’s justice system, Bensouda said the investigation will “allow for a continuing assessment of actions being taken at the domestic level in accordance with the principle of complementarity.”

Experts have warned that Israel could have a harder time defending its settlement policies in in east Jerusalem and the West Bank.

Settlements are widely viewed as illegal based on the Geneva Convention principle that an occupying power is barred from transferring its population to territories captured in war. Population transfers are listed as a war crime in the ICC’s founding treaty, the Rome Statute.

Israel annexed east Jerusalem after the 1967 Mideast war and considers the West Bank disputed territory. But its positions are not internationally recognized, and most of the world considers both areas occupied territories.

Today, some 700,000 settlers live in the two areas, which the Palestinians claim, along with Gaza, for a future state. Israel says the fate of these areas should be resolved in negotiations, and that ICC involvement will push the Palestinians away from the negotiating table.

Bensouda said that priorities in the investigation will be “determined in due time” based on constraints including the coronavirus pandemic, limited resources and prosecutors’ existing heavy workload.

While Wednesday’s decision does not pose any immediate threat to Israel, the court has the authority to quietly issue arrest warrants for people suspected of crimes.

Netanyahu was prime minister during the 2014 Gaza war and has been a strong advocate of the settlements. His defense minister, Benny Gantz, was Israel’s military commander during the war. Israeli media have said that Israel is in touch with allies who are members of the ICC to receive warnings about potential arrest warrants against its citizens.

In his statement, Netanyahu said Israel was being unfairly singled out. He accused the court of “turning a blind eye to Iran, Syria and the other dictatorships that are committing real war crimes.”

International human rights groups praised the decision as a step toward justice for Israeli and Palestinian victims.

“ICC member countries should stand ready to fiercely protect the court’s work from any political pressure,” she said.