US governors under pressure as Trump prepares to ease restrictions 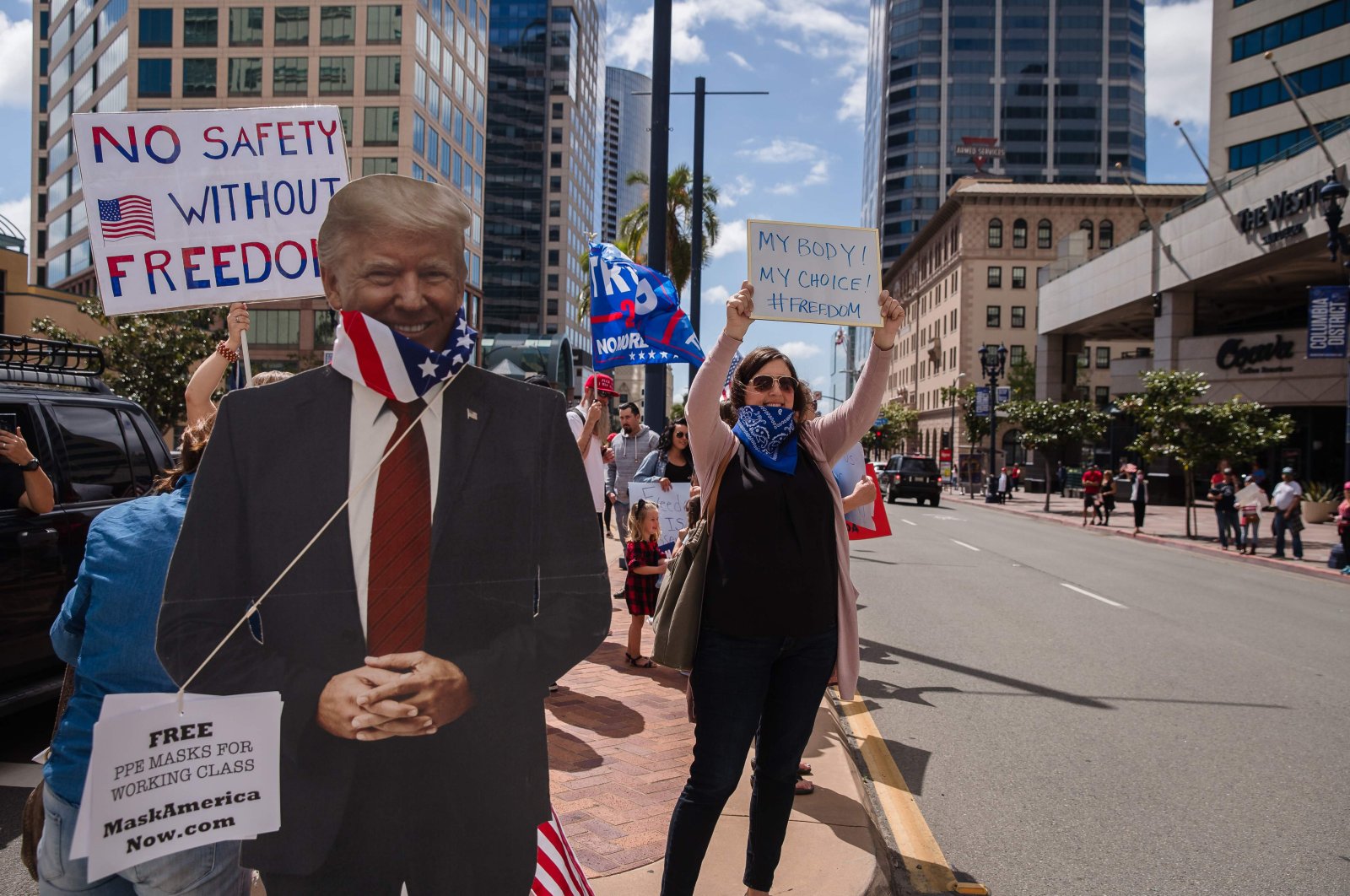 A Trump cutout with a US flag around its neck is seen next to protesters rallying in downtown San Diego against California's stay at home order to prevent the spread of the novel coronavirus, which causes COVID-19, on April 18, 2020. (AFP Photo)
by Associated Press Apr 19, 2020 12:17 pm
RECOMMENDED

Stores in Texas can soon begin selling merchandise with curbside services, while hospitals will be able to resume nonessential surgeries. In Florida, people are returning to a few beaches and parks. And protesters are clamoring for more.

Governors eager to rescue their economies and feeling the heat from U.S. President Donald Trump are moving to ease restrictions meant to control the spread of the coronavirus, even as new hot spots emerge and experts warn that moving too fast could prove disastrous.

Adding to the pressure are protests against stay-at-home orders organized by small-government groups and Trump supporters. They staged demonstrations Saturday in several cities after the president urged them to “liberate” three states led by Democratic governors.

Protests happened in Republican-led states, too, including in Texas' capital and in front of the Indiana governor’s home. Texas Gov. Greg Abbott already said restrictions will begin easing next week. Indiana Gov. Eric Holcomb – who signed an agreement with six other Midwestern states to coordinate reopening – said he would extend his stay-at-home order until May 1.

For the first time in weeks, people were able to visit some Florida beaches, but they were still subject to restrictions on hours and activities. Beaches in big cities stayed closed.

Rhode Island, between the hot spots of Massachusetts and New York, has seen a steady daily increase in infections and deaths, with nursing home residents accounting for more than 90 of the state’s 118 deaths. The state’s death rate of around 10 people per 100,000 is among the nation’s highest per capita, according to data compiled by the COVID Tracking Project.

Massachusetts had its highest number of deaths in a single day on Friday, with 159. Republican Gov. Charlie Baker, citing health experts’ advice, said states should wait until infection rates and hospitalizations decline for about two weeks before acting.

Trump, whose administration waited months to bolster stockpiles of key medical supplies and equipment, appeared to back protesters.

“LIBERATE MINNESOTA!” “LIBERATE MICHIGAN!” “LIBERATE VIRGINIA, ” Trump said in a tweet-storm in which he also lashed out at New York Gov. Andrew Cuomo, a Democrat, for criticizing the federal response. Cuomo “should spend more time ‘doing’ and less time ‘complaining,’” the president said.

At his Saturday briefing with reporters, Cuomo cited more progress. The state’s daily increase in deaths fell below 550 for the first time in more than two weeks as hospitalizations continued to decline.

But the crisis is far from over: Hospitals are still reporting nearly 2,000 new COVID-19 patients per day, and nursing homes remain a “feeding frenzy for this virus,” he said.

“We are not at a point when we are going to be reopening anything immediately,” Cuomo said.

Several hundred people rallied in Texas’ capital, chanting “Let us work!” Many clamored for an immediate lifting of restrictions in a state where more than 1 million have filed for unemployment since the crisis began.

The rally was organized by a host of Infowars, owned by conspiracy theorist Alex Jones, who joined protesters on the Capitol steps. Jones is being sued in Austin overusing his show to promote falsehoods that the 2012 Sandy Hook school massacre in Connecticut was a hoax.

In Indianapolis, more than 200 people stood close together outside the governor’s mansion, carrying American flags and signs demanding that Gov. Holcomb lift restrictions. Indiana’s state health department reported 529 new cases between April 7 and midday Friday, raising the total to more than 10,600. The number of deaths rose by 26, to 545.

Elsewhere, a few hundred demonstrators waved signs outside the Statehouse in New Hampshire, which has had nearly 1,300 cases of the virus and more than three dozen deaths.

“Even if the virus were 10 times as dangerous as it is, I still wouldn’t stay inside my home. I’d rather take the risk and be a free person,” said one of the protesters, talk show host Ian Freeman.

Trump is pushing to relax the U.S. lockdown by May 1, a plan that hinges partly on more testing.

Public health officials said the ability to test enough people and trace contacts of the infected is crucial before easing restrictions, and that infections could surge anew unless people continue to take precautions.

Vice President Mike Pence delivered a commencement address at the U.S. Air Force Academy in Colorado, a trip aimed at showing the country is on course to gradually reopen.

In Asia, some nations that until recently appeared to have the outbreak under control reported fresh flareups.

Singapore reported a sharp, one-day spike of 942 infections, the highest in Southeast Asia, mostly among foreign workers staying in crowded dormitories. That brought the total to almost 6,000 in the city-state of 6 million.

Total cases topped 10,000 in Japan, where Prime Minister Shinzo Abe has said he’s concerned that people are not observing social distancing and announced a 100,000-yen ($930) cash handout to each resident as an incentive to stay home.

There have been tentative signs that measures to curb the outbreak are working, with the rate of new infections slowing across Europe.

France and Spain started dismantling some field hospitals, while the number of active cases in Germany has slowly declined over the past week as people recover.

The agency urged the French public to stick to strict confinement measures, which have been extended until at least May 11: “Don’t relax our efforts at the moment when confinement is bearing fruit.”

Spanish Prime Minister Pedro Sánchez said his government will seek to extend the state of emergency to May 9 but will begin easing the total confinement of children beginning April 27.

Children are thought to be a major source of transmission even if they rarely fall ill from the virus. They’ve been confined to their homes for five weeks, prompting parents to ask that they be allowed to at least take a daily walk.

Sánchez announced in a televised news conference late Saturday that kids would be able “to get out of their houses for a period on a daily basis,” but the specifics needed to be ironed out with experts.

The national lockdown would be rolled back only when Spain’s embattled health system is ready for a possible rebound of infections, he said.

The virus is believed to have infected more than 2.3 million people worldwide. While most recover, the outbreak has killed at least 155,000 people, according to a Johns Hopkins University tally based on figures supplied by health authorities around the globe.

The number almost certainly underestimates the actual toll. Nearly everywhere, thousands have died with COVID-19 symptoms – many in nursing homes – without being tested for the virus, and have thus gone uncounted.