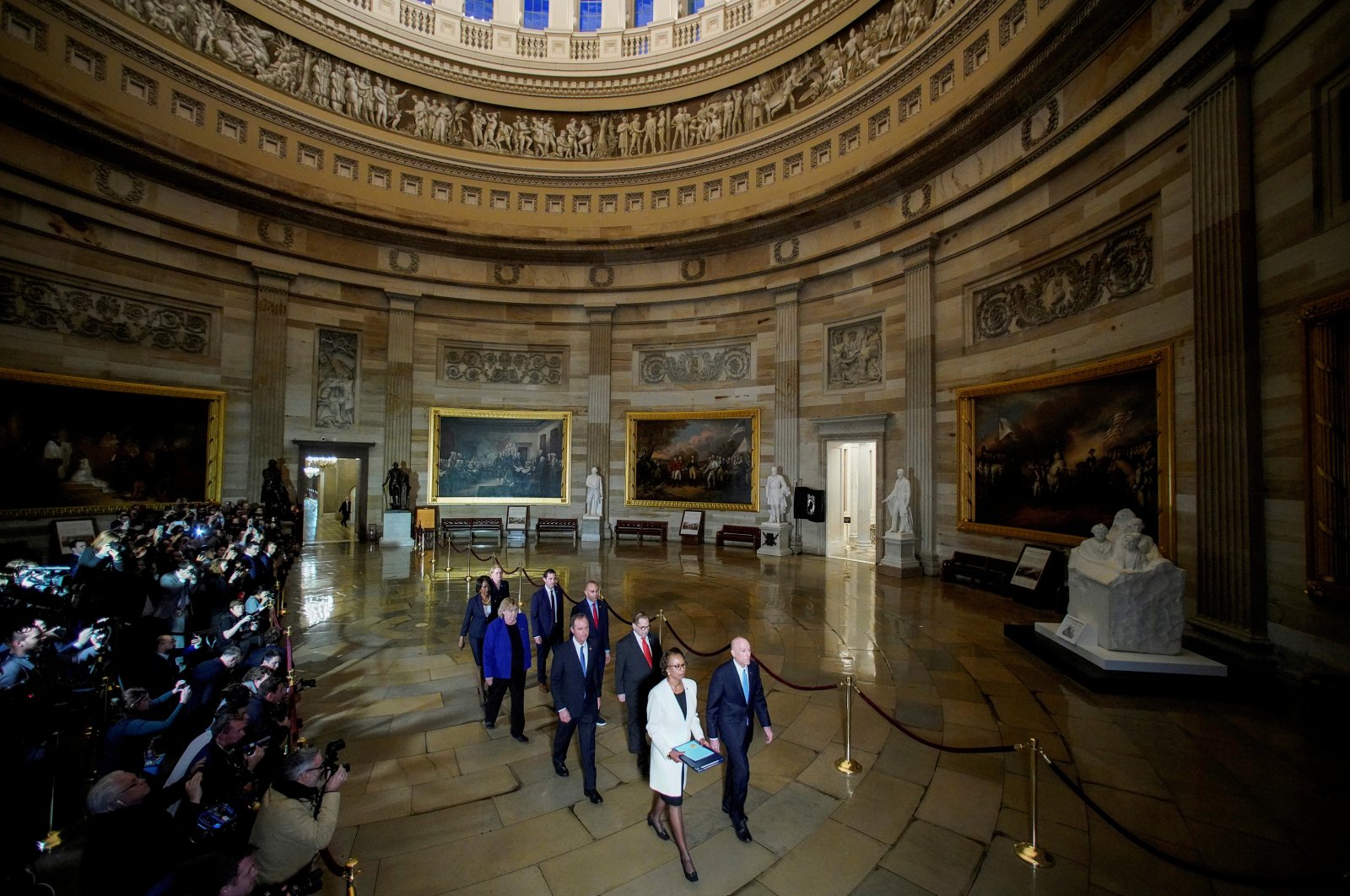 House Sergeant at Arms Paul Irving and House Clerk Cheryl Johnson carry two articles of impeachment against U.S. President Donald Trump during a procession with the seven House impeachment managers through the Rotunda of the U.S. Capitol to the U.S. Senate in Washington, U.S., Jan. 15, 2020. (Reuters Photo)
by REUTERS Jan 25, 2021 3:24 pm
RECOMMENDED

The U.S. House of Representatives is preparing to bring the impeachment charge against former President Donald Trump to the Senate for trial, launching his second impeachment after the deadly Jan. 6 attack on the Capitol.

Nine House Democrats who will serve as prosecutors will proceed through the building where hundreds of Trump supporters fought with police, leaving five dead, at about 7 p.m. on Monday (midnight GMT), carrying the article of impeachment to the Senate where Trump will face trial.

A similar ceremony was carried out for Trump's first impeachment trial last January, when the House clerk and sergeant at arms led a small procession of lawmakers through a hushed Capitol. It will mark two historic firsts – Trump is the only U.S. president to have been impeached by the House twice and will be the first to face trial after leaving office.

Conviction in the Senate could result in a vote to ban him from holding future office. Leaders of the Senate, which is divided 50-50 with Democrats holding a majority because of the tie-breaking vote of Vice President Kamala Harris, have agreed not to start the trial until Feb. 9.

That gives Trump more time to prepare a defense and allows the chamber to focus on President Joe Biden's early priorities, including Cabinet appointments. After a two-month campaign to try to discredit his election defeat, Trump on Jan. 6 urged his followers to "fight" to overturn the result.

A mob later descended on the Capitol, sending lawmakers into hiding and for several hours delaying Congress' formal certification of Biden's victory. Ten House Republicans joined Democrats in voting to impeach Trump, a step akin to an indictment in a criminal trial. Senate Democrats will need the support of 17 Republicans to convict him, a steep climb given Trump's continued popularity with Republican voters.

A Reuters/Ipsos poll on Friday found that 51% of Americans thought the Senate should convict Trump. That largely broke down along party lines, with less than two in 10 Republicans agreeing.

Multiple Republicans, including the party's Senate leader, Mitch McConnell, have condemned the violence and criticized Trump for inciting it. Republican Senator Mitt Romney told CNN on Sunday that the trial was necessitated by Trump's inflammatory call to his supporters.

"I believe that what is being alleged and what we saw, which is incitement to insurrection, is an impeachable offense. If not, what is?" said Romney, a frequent Trump critic and the only Republican to vote to convict him at his first impeachment trial. But a significant number of Republican lawmakers have raised objections to the impeachment. Senator Marco Rubio pronounced the trial "stupid" and "counterproductive" on "Fox News Sunday."

"We already have a flaming fire in this country and it's like taking a bunch of gasoline and pouring it on top of the fire," Rubio said.

The case is a simpler one than Trump's first impeachment, which focused on a phone call with Ukraine's president that was disclosed by a whistleblower. In this case, the actions in question played out in a public speech and a separate phone call to a Georgia election official that was released to the news media.

Trump was acquitted in his first trial last year, which took nearly three weeks and dealt with charges the president had abused his power and obstructed Congress in relation to his call pressing Ukraine to investigate Biden.

Senate Majority Leader Chuck Schumer said on Sunday the second trial would be fairly quick. "Everyone wants to put this awful chapter in American history behind us. But sweeping it under the rug will not bring healing," Schumer said in New York.

"I believe it will be a fair trial. But it will move relatively quickly and not take up too much time because we have so much else to do."