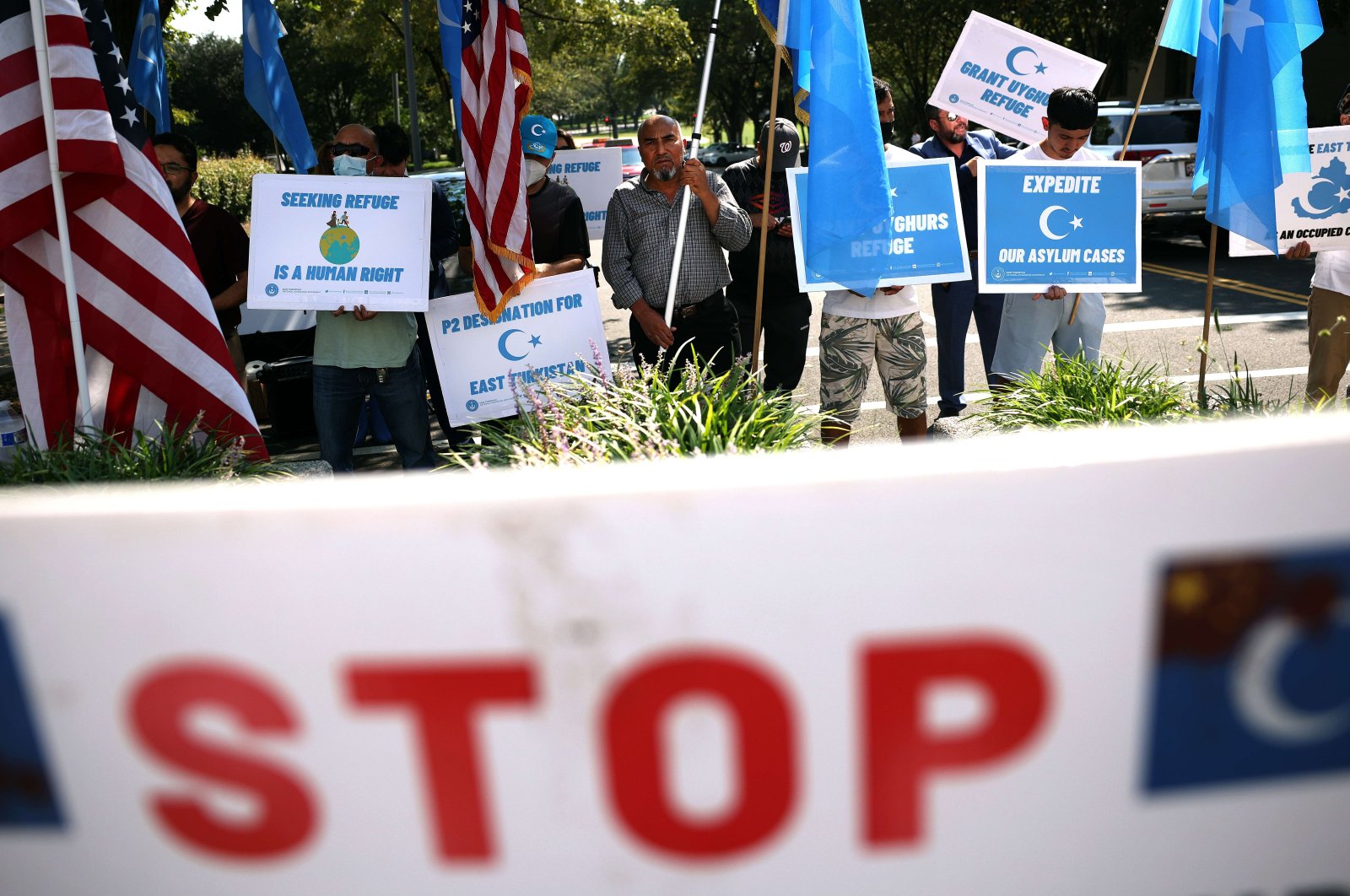 Signs are seen as members of the Uyghurs community, a mainly Muslim ethnic group originating from central and east Asia, rally against the Chinese government at the U.S. State Department, Washington, D.C., U.S., Sept. 15, 2021. (Getty Images/AFP)
by Daily Sabah with AP Sep 17, 2021 8:50 am
RECOMMENDED

A group of more than 40 Muslim civil rights organizations in the United States boycotted Hilton Hotels on Thursday over what it says are plans to build a hotel on the site of a bulldozed Uyghur mosque in China.

The Council on American-Islamic Relations (CAIR) and other organizations held a news conference Thursday outside the Capital Hilton in Washington announcing the boycott campaign. Speaking at a news conference in Virginia CAIR said that attempts to negotiate with the hotel group to cancel the building plans had gone “to no avail.”

“Today, we are announcing a global boycott campaign against Hilton,” Nihad Awad executive director of CAIR said. “You and I have the choice to choose where to go on your travel or to do business meetings or to hold events, weddings or banquets,” he added, emphasizing that the plan for construction violates human rights and destroys Uyghur culture and faith.

Critics say the campaign amounts to cultural genocide, including the detention of Uyghurs in "re-education camps” and the destruction of mosques and other cultural sites. In July, the bipartisan Congressional-Executive Commission on China also called on Hilton to halt the project, which calls for the construction of a Hampton Inn.

A spokesperson for McLean, Virginia-based Hilton released a statement Thursday saying the corporation's franchise model "limits Hilton’s involvement in the development and management of properties. ... However, we can confirm that in 2019 an independent Chinese ownership group purchased a vacant lot through public auction, with plans for commercial development, including a hotel. Hilton was not involved in the site selection.”

China has been long accused of carrying out an offensive campaign against Muslim Uyghurs and committing such crimes as mass internment, forcible sterilizations, separating children from families and destroying religious and cultural locations. Beijing has denied all the accusations.

The boycott was called over a mosque in Hotan prefecture, which was downed in 2018, with the Hilton saying that it wants to turn it into a Hampton Inn hotel.

According to the Australian Strategic Policy institute, some 16,000 mosques in 900 Xinjiang locations were destroyed between 2017 and 2020. China has removed minarets from mosques, and some have been completely demolished in an area closely monitored by Beijing. The destruction was confirmed by reports from the ground and by comparing satellite images from past years to the present.

Over 1 million Uyghurs and other ethnic minorities are being detained in Xinjiang camps, the United Nations estimated. China initially denied the existence of the camps but has since stated that they are professional centers set up to fight extremism.

“I regret that I am not able to report progress on my efforts to seek meaningful access to the Xinjiang Uighur Autonomous Region,” Bachelet said at the opening of the Human Rights Council in Geneva. “In the meantime, my office is finalizing its assessment of the available information on allegations of serious human rights violations in that region, with a view to making it public,” she said.